Leave a comment Posted by The Displaced Nation Team on December 17, 2013 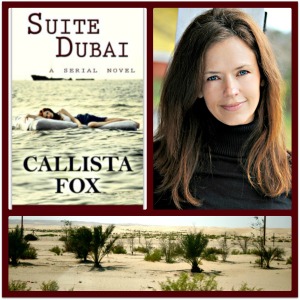 It’s mid–December—perfect timing for the second installment of Suite Dubai, a serial novel by adult Third Culture Kid Callista Fox. As Callista tells it, the book grew out of a story that entered her head that wouldn’t go away: “There was this girl, young, vulnerable, naive, walking along a concourse in an airport, among men in white robes and checkered scarves and woman in black gauzy material. Where was she going? What would happen to her there?” Missed the opening installment? Get caught up now!!! NOTE: Highly addictive! Six more parts to come in 2014.

Her parents hadn’t wanted her to take this job. “Where?” her dad had asked, like he’d misheard her. “Dubai?”

Her mom had put her hand to her mouth. “All the way over there? In the middle of all those bombings? Can’t you wait a few more months, you know … see if something comes up here?”

A few more months? She’d already waited a few months. Twelve, to be exact. She’d already filled out more applications than she could count, for jobs she didn’t want until they’d rejected her. She had a degree in journalism and couldn’t get a job working the desk at the Motel 6. “Have you ever worked in hospitality?” a woman named Melinda had asked her over the phone, missing the irony of her own inhospitable tone.

In hospitality? What did that even mean? She’d spent her whole life being unnecessarily nice to people, on the phone, at the store, even in heavy traffic. She was certain she could hand someone a room key without causing a scene.

This job, the one waiting for her on the other side of the crowd, had been advertised on a website with an international employment section that she read mostly to pass the time, something she’d had plenty of since graduation. The public-relations position caught her eye, but she didn’t apply. She didn’t even know where Dubai was.

Then, rather than ask her mom for gas money—again—she threw some old clothes into the back of her Honda and headed for a consignment store. At a busy intersection she saw a guy dressed as a mattress, dancing on the side of the road, flashing a 15 PERCENT off sign at oncoming traffic. While she waited at the light, a gust of wind came and caught the inflatable costume like a sail and blew him back a few feet. He stumbled, almost fell, and then regained his footing, but his sign was blowing along the strip of grass and he had to turn and chase after it, the wind blowing against the back side of his costume now. His legs, outfitted in gray tights, stumbled along as he tried to slow himself down lest he become airborne and delivered to the brick wall of the nearby Chick-fil-A. She was scared for him, and she was even more scared she might recognize him from one of her writing classes.

That day she drove home and rewrote her résumé.

She added that she had done some public-relations work for a local nonprofit (omitting that it was her mother’s nonprofit). She had promoted an art auction that raised over $120,000 for at-risk teens (omitting that she’d really paraded paintings, like a woman on a game show, around a banquet hall, encouraging people to bid). She had been more of an art Sherpa than an event planner. Yes, she embellished. That’s what writers do. She wrote a kick-ass cover letter about the lost art of storytelling in the business world and clicked send.

“Where. The hell. Did you find this job?” her friend Emily asked, scribbling down the name of the website with a pen she’d chewed until it cracked. It was her tenth day without a cigarette. “I’d do it. I’d go in a heartbeat. I’m so tired of serving penny beer to drunk college guys.”

When they’d started their journalism degrees, they had both expected a job with the local newspaper that would lead to a column with the New York Times or a wire assignment that required a khaki blazer and a handsome translator. Now all they heard was, “Journalism is dead. You need to start a blog.” She and Emily scraped up money for domain names but neither of them got very far. Her life had become so dull and disappointing she was too embarrassed to write about it.

Emily was having the same problem. “I could describe the texture of the vomit delivered to my left sandal by a guy in a Georgia Tech jersey, or how I’ve started stealing my parents’ dog’s antidepressants.”

“Don’t worry,” Rachel said as she moved her chair into the shifting shade of the umbrella in Emily’s backyard. “I won’t get it. I’m not really qualified. Five years’ experience? Everyone wants five years’ experience. What I really need is a time machine.”

“But what if you do get it?” Emily said squinting at her. “I mean, a real job. One your parents wouldn’t be embarrassed to tell their friends about. I see my mom’s lip quiver before she tells people I’m a waitress at Kelly’s. She’s embarrassed. I don’t blame her. All those ballet lessons, cello lessons, Saturday Spanish classes, SAT prep courses, so I could get ahead. That’s what they said. So I could get ahead. Ahead of what?” She leaned back in her chair. “I wear a green apron with a pin that says ASK ABOUT OUR BUCKET SPECIALS. I count out change and signal to the bouncer when he needs to intervene. But see, I use the word “intervene” instead of “throw his ass out.” So it was all worth it, right? Because…vocabulary.”

“At least you’re good at something. I was a horrible waitress. Always forgetting who got the water, who got the wine. Twice I left a family sitting there, at a table, for almost an hour before even taking their order. The tips they gave me were out of pity. I saw it in their eyes.”

“You’re good at something. You just don’t know what it is yet,” Emily said, unwrapping a piece of gum and folding it into her mouth. “I should go back to school, take some architecture classes. That sounds so much better, right? ‘My daughter’s studying to be an architect.’ Especially if you go off to Dubai and leave me here alone.” Her eyes got shiny with tears. She looked away. “Or you could take me with you.”

None of it was awful. They weren’t starving. They weren’t homeless. But enough days repeat themselves and you can’t imagine any day in the future being different than the one before it. This is how people fail, Rachel thought. A little bit at a time.

Two weeks went by without a reply. Then one night she remembered the business card in her nightstand. The one she’d had for over a year. The one she’d almost tossed in the garbage. When she had put it in the drawer she’d wondered why she was keeping it, but she knew she’d never get another business card with the word “sheikh” on it. She dumped the drawer on her bed and dug through the gum wrappers, hair ties, and scraps of bad poetry she’d written late at night when she couldn’t sleep. There it was, a simple white card embossed with the name Sheikh Ahmed Al Baz. He lived in a city called Riyadh, not Dubai. Wherever it was, it was closer to Dubai than Atlanta. So she wrote him an e-mail, asking if he remembered her, asking if he’d heard of the Al Zari Hotel.

So, readers, how are you enjoying the story so far? Let us know in the comments… And if you can’t wait until next month, you can always download the complete episode of “Arriving” (this is just the beginning) —as well as the next episode, provocatively entitled “Party on Palm Island”—from Amazon.

Callista Fox moved to Saudi Arabia when she was eight and lived there off and on until turning 19. she went to boarding schools in Cyprus and Austria. She has written two travel books and a travel column in the Sunday Oklahoman. Currently, she writes proposals for a consulting firm that provides technology and management solutions to governments and nonprofits around the world.

STAY TUNED for tomorrow’s post, an interview with this month’s featured author, Alexander McNabb, back by popular request. We’ll be talking about, and giving away, the final book in his Middle East trilogy: Shemlan!!!