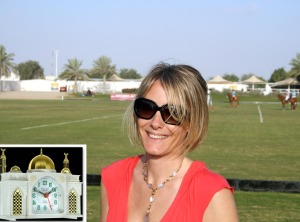 What made you leave your homeland in the first place?
Despite being 100 percent British, I never felt at home in England. As young as six years old I used to wake up feeling “displaced.” I was unable to identify that feeling until I moved to Dubai and realized that the feeling had gone. To be honest, I think “home” could be anywhere that has a positive attitude, hot sun, blue sky and a glittering sea.

Was anyone else in your family “displaced”?
My father grew up in India as the child of expat parents and so my own childhood in England was full of stories of hill retreats, jungles, hot sun, ayas and curries. My mother was born to expat parents in Romania. My aunt emigrated from the UK to Canada.

My husband, whom I met at university in the UK, is also displaced — I don’t think it’s a coincidence we ended up together. Of Indian origin, he grew up largely in Kenya and did his secondary schooling and university in the UK. We were married in Nairobi and then lived in the UK for one year. My husband went to Dubai on business, brought me back a book about Dubai and said “Let’s move there!” I didn’t need any convincing. We sold our house and cars, and shipped all our possessions over and have, so far, never looked back. 🙂

So you’ve felt the most displaced in your homeland?
Yes. Growing up in England, I felt like an alien. Throughout my teenage years I plotted my escape. I knew I would leave as soon as I could. It was just a matter of when, where and with whom. Even now, when I go back, I feel like a foreigner.

Is there any particular moment in Dubai that stands out as your “least displaced”?
Probably the first weekend after my husband and I moved to Dubai — when we sitting on the public beach watching the sun go down and the sand turn from white to pink and listening to the azaan (call to prayer) echo across the beach. I had that first flutter of “This is home! We’re not on holiday!” excitement, which still continues, even after 14 years.

You may bring one curiosity you’ve collected from your adopted country into The Displaced Nation. What’s in your suitcase?
A plastic mosque alarm clock that wakes you with the azaan [see photo inset].

You are invited to prepare one meal based on your travels for other members of The Displaced Nation. What’s on your menu?
Emirati food revolves largely around meat and I am a vegetarian, so I would have to broaden it to include other Middle Eastern cuisines. Rather than three courses, I’d offer you a selection of mezze (small dishes):

We’d wash it down with a rich red wine from Lebanon’s Château Musar, Ksara or Kefraya.

For dessert I would offer you a delicious Umm Ali — an Egyptian version of hot, bread pudding, served with a little vanilla sauce. And, of course, a cardamom-laced Arabic coffee to finish.

And now you may add a word or expression from the country where you live in to The Displaced Nation argot. What will you loan us?
Inshallah (If it’s God’s will) — it’s the word you hear the most when you want to get something done and you’re begging for a commitment that it will be. It’s also a word that UAE expats use, in their transient lives, to acknowledge that they aren’t entirely sure of what may happen next. “We’ll be staying here for two years, Inshallah.”

This month we are looking into beauty and fashion. What are the best Emirati beauty secrets you’ve discovered?
From observing highly groomed Arab ladies, I’ve learned the value of the perfectly shaped eyebrow – something to which I’d barely paid any attention in England. I’ve also discovered the joys of a good scrub in the hammam. It’s not Emirati per se, but does have a long history here. And although you don’t often see a UAE national lady without her shayla (rectangular headscarf), the beauty salons are full of Emirati ladies having their hair blow-dried — I’ve learned to get my hair professionally “blown” before any major social event. It gives you an instant polish that makes all the difference.

What about fashion — any beloved outfits, jewelry, or other accessories you’ve collected in the UAE?
Emirati ladies put a lot of thought into accessories such as sunglasses, handbags and shoes, given that the rest of them is covered by the abaya (robe-like dress or cloak) when out in public. I’ve picked up their habit of using a great handbag to pull a look together. I also have a beautiful, jewelled black thobe (ankle-length garment traditionally worn by Arab men) that doubles up as a great evening dress.

Editor’s note: Annabel Kantaria was awarded one of The Displaced Nation’s “Alices” for a post she composed about the need for “behavior lessons” before working in the UAE.

Readers — yay or nay for letting Annabel Kantaria into The Displaced Nation? Tell us your reasons. (Note: It’s fine to vote “nay” as long as you couch your reasoning in terms we all — including Annabel — find amusing.)

STAY TUNED for tomorrow’s installment from our displaced fictional heroine, Libby, who is once again on her own while her feckless husband clocks up more hotel points and air miles — perhaps he intends to be present at the birth of their twins via Skype? (What, not keeping up with Libby? Read the first three episodes of her expat adventures.)

img: Annabel Kantaria at a polo match in Dubai; inset: her plastic mosque alarm clock, which she proposes to bring into The Displaced Nation.