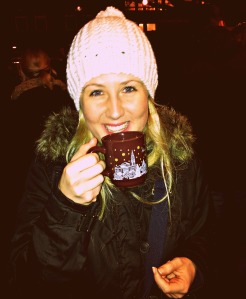 What made you leave your homeland in the first place?
The only thing that really made me leave my home was me. I had traveled on and off throughout my studies and was ready for something a bit more … daring. I wanted to live in Europe, not just travel through it whenever I could get enough money and find enough time. I am incredibly lucky to come from the country I do. To return to it would be no problem, to have its passport is a blessing. I just wanted to try something different, and in Germany I found something more solid to assuage my constantly itching feet.

Was anyone else in your family “displaced”?
My parents are both travelers and my mother spent a year working in London in her twenties. My uncle spent four years living in South Africa and traveling through Europe, before meeting his Swiss wife and bringing her back to Australia — she’s now displaced. I think many Australians are nomadic by nature — we like to wander, we like to see what’s out there. It’s in our blood.

Describe the moment when you felt most displaced since making your home in the historic university city of Münster.
Münster is one of the “nicest” cities in the world, so my displacement here is usually a case of: “What’s a girl like me doing in a nice city like this?” I’m pleasantly displaced, in other words! But while there haven’t been precise moments of aggravation, there have been parts of the ongoing adjustment process that made me want to click my heels together three times. As much as I love it, Germany has this thing with bureaucracy and paperwork and red tape; and sometimes, when I am drowning in letters from my insurance company, or wading through the healthcare system, or putting together paperwork for my visa renewal, or trying and failing to understand the language, I do think: wouldn’t it just be easier if you were at home? I’ll soon be moving to Bavaria — and all the bureaucracy that will come with a new job, a new visa and a new state (or as some Germans would have you believe, a new country) will probably have me hurling abuse at walls every so often. Just for therapy. Oh yes, and when it is -18 degrees celsius, I start thinking: what the hell am I doing in this country?

Have you also had some moments when you feel more at home in Germany than you did in Oz?
Any time I have a cup of tea in hand and am talking to a good friend, I feel as if I could be anywhere in the world, and this person and I would still have stories to share and understanding to give. It isn’t a matter of feeling more at home than in my home country, it is a matter of feeling as at home — and I think that’s as comfortable as it gets.

You may bring one curiosity you’ve collected from your adopted country into The Displaced Nation. What’s in your suitcase?
Probably an enormous amount of würste in the many and varied forms it comes in.

Food is close to the heart of all Displaced Nation citizens. Are there any other special German foods you’d like to offer us besides German sausages?
Yes — Schnitzel (deep-fried veal) and rotkohl (German red cabbage).

I assume you’d drain the cabbage in your Villeroy & Boch colander? I saw a photo of it on your blog — rather whimsical and wonderful! And now you may add a word or expression from the country where you live in to The Displaced Nation argot. What will you loan us?
From Germany: Actually, I have two: Das stimmt (that’s true) — it rolls off the tongue; and schnabel (a bird’s beak or bill) … because it is SO CUTE.
From Greece: Siga siga (slowly slowly) — it sums them up perfectly.

This month, because of Valentine’s Day, The Displaced Nation has been delving into the topic of finding love abroad. And today is Leap Day, when according to legend, women get to propose to men. Have you found a candidate in Gerany?
I met the Significant German — I call him SG on my blog — within four months of moving to Münster. I wrote about our story in a blog post last November. As I said then, if I had to give a tagline to the movie poster for my life as it currently is, it would be “she came for the adventure and stayed for love.” Sounds romantic and exciting, doesn’t it? But it’s a new one for me.

I read that on Leap Day (February 29), women are allowed to propose to men. Any plans?
Well, I’m starting my second big life in Germany TOMORROW when I move to Bavaria to be with SG.

On a more prosaic note, are German men very different from their Aussie counterparts?
Oh Lord, the differences are many. The main thing — and this applies to Australian men as compared to many European cultures, not just Germany — is that Australian men have this ongoing thing with being a “bloke”: masculinity in its conventional sense is quite important to an Australian male’s identity, even if they aren’t aware of it.

Also, this month we’ve been looking at expat and travel films, in honor of the Oscars. Do you have any favorite films in this “genre”?
Bienvenue chez les Ch’tis” (Welcome to the Sticks) — not exactly about an expat, but the character moves towns in France. It captures the essence of moving and feeling like an alien, then adapting, perfectly! And as far as the Love theme of February goes: Love Actually. Always Love Actually.

Readers — yay or nay for letting Liv Hambrett into The Displaced Nation? Tell us your reasons. (Note: It’s fine to vote “nay” as long as you couch your reasoning in terms we all — including Liv — find amusing.)

STAY TUNED for tomorrow’s installment from our displaced fictional heroine, Libby. Having de-stresed with Oliver on their Valentine’s Day weekend, she thinks she may be ready to face the Woodhaven world again and its tribulations. But as we all know, it takes more than a facial and pedicure to attain such a level of serenity. (What, not keeping up with Libby? Read the first three episodes of her expat adventures.)

img: Liv Hambrett with her mug of glühwein in Münster, Germany.