THE DISPLACED Q: With enough time and resources, what would you most like to learn in your adopted culture? 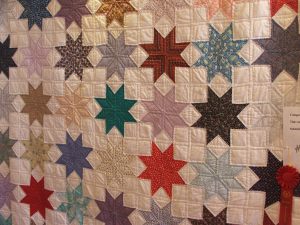 A long time ago, in a country far, far away, my nine-year-old self visited a museum in England. The American Museum in Bath was my first experience of anything American that wasn’t viewed on a black-and-white TV, and, while I recall finding the museum interesting, there was one particular exhibition that is still lodged in my long-term memory: the extensive collection of antique quilts.  Exquisite, detailed, and painstakingly hand-sewn by American women hundreds of years ago, these quilts and the stories behind them fascinated me.

How difficult can it be?

Fast forward a couple of decades, and there I was, newly arrived in New England. I’d worked out the day-to-day details of where to shop, where to bank, and how to order a pizza in a fake American(ish) accent so that it got delivered to the right address. Perhaps it was the amount of free time suddenly on my hands, or the impending arrival of another baby that put me in a domesticated mood, but when I received in the mail a brochure for adult education courses at the local high school, I signed up for Quilting For Beginners. I was in the heart of quilting territory, and I was going to make one of those big quilts. How difficult could it be, if women two hundred years ago made them by hand, by candlelight?

The course lasted for eight weeks. If I’d previously admired the Old American quilters whose handiwork graced the museum in Bath, at the end of those eight weeks they had achieved god-like status in my mind. It’s not as if I was a novice at sewing. My mother, an expert needlewoman and daughter of a tailoress herself, had taught me the basics long ago. But whereas I was making a small lap-quilt on an electric sewing machine, many of the much larger quilts I’d seen in Bath would have been made by hand;  the first American patent for a two-thread machine wasn’t issued until 1846.

…and an appreciation for our foremothers

In the same way I am in awe of Austen and Dickens writing without the help of even a typewriter, let alone a Mac, I am humbled to think of the hours these women spent in creating a textile legacy for their country’s future generations. The two month process of learning a craft associated with the part of the world where I was living made me appreciate aspects of the region’s history and early life, perhaps more than visits to American museums on this side of the Atlantic did.

The quilt I made is still here, draped neatly over a chair in the spare bedroom, a reminder of eight weeks  of cutting, pinning, sewing, and then unpicking when it all went wrong — but eventually finishing. Eight weeks of learning a new craft…and so much more.

Readers, what about you? What would you like to learn in your adopted country, and what else would it teach you?

THE DISPLACED Q: Expats, repats, what’s the most outlandish tweak you’ve made to your Thanksgiving menu?

Since my repatriation to America, Thanksgiving has become my very favorite holiday here. This is partly because of a tweak that I make to the menu, but we’ll get to that later.

I wasn’t always so thankful for Thanksgiving. I only celebrated this American holiday twice while living abroad for many years, first in England and then in Japan — and to be honest, I didn’t really miss it.

Both celebrations took place when I was pursuing graduate studies at a British university.

The first time was for my very first Thanksgiving away from my family. I joined several other American grad students in preparing a traditional Thanksgiving dinner to serve in the dorm. Our guests were mostly other international students who were curious to experience an authentic version of this quintessentially American custom — as I recall, there were very few Brits.

At one point, a rather bitter argument erupted between Anna, a Harvard-educated woman who was pursuing a higher degree in feminist studies, and Andy, a Georgetown-educated man who was doing an M.A. in politics.

Andy didn’t like the fact that Anna was carving the turkey, proclaiming to the assembled guests:

It can’t be Thanksgiving if a WOMAN is carving the turkey.

I don’t really remember what happened after that — whether Andy insisted upon taking over, or Anna stormed out of the room. But it did cast a bit of a pall over the proceedings.

The food, though, was a close facsimile to the meals I’d enjoyed at home. And the arguing part? That was something I could relate to as well.

And there was snow, which we could see through the huge dorm windows, covering the panoramic Constable (literally) landscape below.

The only other time occurred a few years later, when an American friend came to live in North London on a teaching exchange with the Harrow School.

He, too, was spending his first Thanksgiving away from home, so decided to host a potluck Thanksgiving dinner in his living quarters.

Again, I think the food was good, but as I recall, the guests, most of whom were English, thought that potluck was a funny way to do a formal dinner. And the setting wasn’t exactly conducive to re-creating a New World feast. Walking from Harrow-on-the-Hill station, we passed by boys in the quaint Harrow uniform, including black ties (allegedly they are still in mourning for Queen Victoria!).

After that rather harrowing (sorry, couldn’t resist) experience, I stopped doing Thanksgiving. I married a Brit and we invariably went to his family for Christmas dinner, which — probably not coincidentally — resembles the Thanksgiving meal enjoyed by the Pilgrims. Turkey is the most popular main, cranberry sauce and all. (No pumpkin pie, though!)

Even when we moved to Japan, where there were more Americans, I didn’t reinstate the custom. It seemed too much like hard work competing at the international grocery stores for vastly overpriced frozen turkeys (specially imported for the occasion) and cans of pumpkin.

What’s more — and I probably should have mentioned this earlier — I’ve never been especially keen on turkey. Once, when I was an early teen, I got food poisoning from an undercooked bird, a memory I’ve found hard to erase.

Something else I forgot to mention is that although I enjoy cooking, I’m not a roaster or a baker. I have never achieved the requisite culinary skills to produce a Thanksgiving dinner on my lonesome — even to this day, when I’m living in the U.S. again.

Nor did I especially enjoy the production such a big meal entails. If I’m going to spend a lot of time in the kitchen, I’d prefer to be producing something a little less bland than a roasted turkey, such as a Madhur Jaffrey Indian spread.

New thought: Maybe going abroad gave me the chance to escape from Thanksgiving? I wonder…

Giving thanks for Thanksgiving…but for one tweak!

So it is strange, the inordinate fondness I now have for this late November holiday. I like it because, unlike Christmas, it’s secular, so you don’t have to hesitate in wishing someone a happy Thanksgiving. It’s also less commercial, consisting primarily of an elegant meal with family and friends (I’m good at tuning out football).

I even enjoy eating turkey more than I used to — especially the dark meat. According to the Wall Street Journal, it’s the sides that American people sometimes tweak. But I like the sides. My absolute favorites are the stuffing and mashed potatoes, in that order.

All of that said, I do feel compelled to make one major tweak because of my hybrid background. Instead of turkey sandwiches the day after, I prefer chirashi-turkey-zushi!!!

Chirashi is Japanese for “scattered” — a scattered bowl of assorted fresh ingredients. Most likely you have tried chirashizushi: a bowl of sushi rice topped with a variety of sashimi (raw fish) and other garnishes. (See #2 in the photo.)

What my (second) husband, who is Japanese, and I like to do, on the day after Thanksgiving, is to substitute leftover turkey for the raw fish.

Chirashi-turkey-zushi is tasty, fast, and easy to make — particularly if you can get ahold of:

There are no hard and fast rules as long as you get the seasoning right. And in my (admittedly rather biased) view, turkey goes as well with that seasoning as raw fish does!

Okay, your turn to tell me: what’s your idiosyncratic contribution to America’s national feast? Or if you’re not American, what do you do to internationalize your native festive spreads this time of year? I’m all ears, and tastebuds…!