Leave a comment Posted by The Displaced Nation Team on June 25, 2014

Alice Shu-Hsien Wu (her own photo).

Elizabeth (Lisa) Liang is back with her monthly column about Adult Third Culture Kids (ATCKs) who work in creative fields, Lisa herself being a prime example. A Guatemalan-American of Chinese-Spanish-Irish-French-German-English descent, she has developed her own one-woman show about being a TCK, which was the closing keynote at this year’s Families in Global Transition (FIGT) conference.

Happy summer/winter/rainy season, international readers! As some of you may recall, last month I talked to Cathleen Hadley, a fellow ATCK contributor to the anthology Writing Out of Limbo, dedicated to telling the stories of those of us who grew up among different countries. Today I’m interviewing another Limbo contributor, Alice Shu-Hsien Wu. An intercultural communication consultant and lecturer at Cornell University, Alice is particularly interested in intercultural adjustment and in internationally mobile families. She has produced two acclaimed videos about college students who have led internationally mobile, nomadic lives, in which the students themselves discuss such challenges as transition, cultural identity, and rootlessness.

Welcome to The Displaced Nation, Alice. I understand that you were internationally mobile while growing up, living in England, Finland and Sweden in addition to the United States.
Yes, my father was a biochemistry professor and had sabbaticals in various places. We went from New York City to Palo Alto, California, when I was 6 and to Upstate New York when I was 7, and then to England when I was 11 and back to New York State when I was 12. We also sometimes traveled to various countries where my father had meetings. I was a Rotary exchange student in Finland when I was 17; went to college and grad school in New York; and then, at age 26, went to Sweden to study and work, returning two years later to Ithaca, New York, where I still live.

Were you happiest in a certain place at a certain time?
I’ve been happy in many places—one of my favorites was California because of the sunny weather, fruit trees and flowers in my yard, and sand in the playgrounds (I was 6 then, remember). This was a welcome change from living in NYC—where the playgrounds were concrete and you weren’t allowed to walk on the small amounts of grass.

“Then when I got here it was a big adjustment identity thing: I didn’t feel American…” – Lynn, US

How did you find your various “repatriation” experiences?
My repatriation from Sweden was probably the most challenging—since I had lived there longer and gotten more immersed in the culture through school, work, and friends. I remember thinking American TV newscasters smiled and laughed too much compared to Swedish commentators and that college and grad students in the United States dressed very informally compared to students in Stockholm. Everything in the U.S. seemed bigger than I had become accustomed to in Sweden—gigantic tableware and portions in restaurants (especially in California), huge shopping carts and vast numbers of products in supermarkets. Also, I was surprised by the general lack of discussion about current world events in the U.S., compared to the amount and frequency of these discussions in Europe.

Now you sound like the other Alice: in Wonderland! (I mention because she’s the Displaced Nation’s mascot.) As an instructor at Cornell, you’ve made two important documentaries about global nomads/TCKs, Global Nomads: Cultural Bridges for the Future (1994) and Global Nomads: Cultural Bridges for the New Millennium (2001). What did you like best about the creative process?
Meeting the students and getting to know them—they were fascinating, honest, and articulate. I screened the first global nomads video for the student interviewees at the end of the school year, and they liked it so much they decided to form a global nomads club. They asked me to be their advisor and I ended up working with them for the next three years. They were amazingly creative, active, and energetic and brought a lot to the campus community.

“Global Nomads have the ability to educate others…” – Liliona, Ghana

What attracted you to the documentary format? I have talked to other ATCK actors like myself and to novelists and artists, but you are my first videographer.
Clearly, there are many effective ways to portray the GN/TCK experience, but I was more familiar with the documentary format since I’d used it in teaching. For example, I’d used videos during intercultural training sessions for students and staff at Cornell to introduce topics like cultural adjustment, culture shock, and reentry shock. I also videoed international students as well as first-generation Americans who were participating in panels about aspects of American culture, as well as some international students who were teaching and doing role-plays. So I was very comfortable with the format. I really like being able to feature students’ own words and impressions—especially when I can capture them interacting with other students. In the first video, all of the students were from Cornell. In the second video, the students were from six different schools across the United States: San Diego State University, Colorado State University, The College of Wooster, George Mason University, Syracuse University, and Cornell. 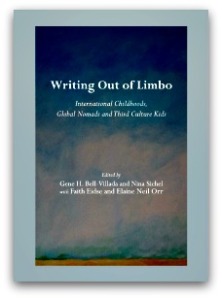 In your essay in Writing Out of Limbo, you describe the impact of the videos not only on the college students who participated in them but also on the TCKs in your audiences. You produced these two documentaries in the era before social media. How did the news spread?
I showed the videos to as many groups at Cornell as I could: students, including Resident Advisors in dorms and the members of an international student discussion group, as well as groups of staff. I also screened them at international and intercultural conferences. Also, the students who appeared in the first video were great with promotions. They showed it to their dorm-mates to help them understand the GN experience, as well as at an initial meeting of their global nomads club to introduce prospective members to the concept. And they traveled together to a Global Nomads International (GNI) collegiate conference in Virginia where they screened it for GNs and TCKs from other colleges. Audience members who’d been TCKs/GNs could really relate to the students on screen, and word soon spread.

“I never wanted to put down roots…”- Brian, US

Did making these videos help you to better understand yourself as an ATCK?
I could relate to many things that the students talked about, and making the videos helped me think about some of my own experiences such as leaving my friends many times and having friends in many different places.

Do you identify most with a particular culture or cultures? Or are you like many TCKs who are more likely to identify with people who have similar interests and perhaps similar cross-cultural backgrounds? (And of course it’s not a given that we’ll identify with them!)
I identify with some aspects of Nordic cultures like Sweden and Finland, some aspects of Chinese culture (due to my family background), and some aspects of American culture. I always seem to meet global nomads and Third Culture Kids wherever I go: I really enjoy it. After learning about the concept of global nomads and Third Culture Kids at the Summer Institute for Intercultural Communication and from the late, great David Pollock, I realized that a lot of the friends I’d made at college were global nomads (and they were very interested in learning more once I’d informed them).

As an ATCK, do you want to move frequently, or do you prefer to have a home base and only travel for pleasure?
My suitcase is always partly packed so it is easy to go on the next trip. On a recent trip to the West Coast, I was thinking about how much I love seeing all the gates listing flights to various parts of the world. I like to imagine what it would be like to jump on one of these planes and end up in a new part of the world. That said, I also enjoy having a home base, especially since I have kids who are quite rooted and don’t like me to be away for very long.

Are you working on a new TCK video project?
Yes. This spring I filmed three panels of Cornell students at Cornell’s Language House. This time I am looking at the influence of technology on the global nomad/TCK experience and how this compares to the experiences of GN/TCK students in my previous two videos. In addition, I am making a video that follows up on some of the students who participated in my first two films, and am planning to use social media tools.

Thank you, Alice! Readers, if you’re interested in learning more about Alice’s work or obtaining a copy of either of her documentaries, you can go to the Families in Global Transition (FIGT) website. And, to reiterate, you can read her chapter describing her work in Writing Out of Limbo: International Childhoods, Global Nomads and Third Culture Kids. The subheds above are all quotes from the students featured in her second documentary. Please leave any questions or comments for Alice below.