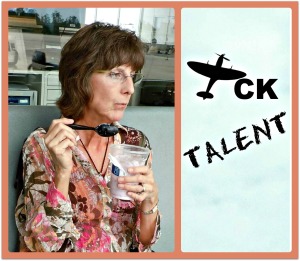 Cathleen Hadley in the transit lounge nervously awaiting her son’s arrival from Afghanistan, taken by her husband, Roger.

Elizabeth (Lisa) Liang is back with her monthly column about Adult Third Culture Kids (ATCKs) who work in creative fields, Lisa herself being a prime example. A Guatemalan-American of Chinese-Spanish-Irish-French-German-English descent, she has developed her own one-woman show about being a TCK, which was the closing keynote at this year’s Families in Global Transition (FIGT) conference.

Greetings, readers! My guest today is Cathleen Hadley, my fellow ATCK author in the anthology Writing Out of Limbo: International Childhoods, Global Nomads and Third Culture Kids. Cathleen grew up in South America and the USA; she is a visual-turned-conceptual artist now living in Oviedo, Florida.

Welcome to The Displaced Nation, Cathleen. I understand that as the US-born TCK child of American parents—a Foreign Service dad and a homemaking mom—you lived in the United States (Washington, DC and Maryland), Venezuela, and Argentina before enrolling in Hartford Art School, part of the University of Hartford in Connecticut, and starting your adult life back in your “home” country. Recalling these many transitions, do you have a place and a time where you felt happiest, as in least displaced?
I had a happy childhood in Maryland, but of all the places I lived while growing up, I liked Buenos Aires the best. BA was like a first love; I had come to it fresh, and found it fascinating. It gave me the freedom to explore, discover joy in my life and youth, find myself in the arts… The depth of my feelings for this city are perhaps best summed up in my reaction to the first book I read by the Argentine writer Jorge Louis Borges (who was a living celebrity at the time), his short story collection Labyrinths. I likened myself to one of his halls of mirrors, and felt as though I lived in his circular time travel of art: prose to dreams or dreams to canvas and so on.

Was it an adjustment coming back to the U.S. after such a heady experience?
When I left, I carried as many things Argentine as I could. I had a lot to relearn. In BA, for example, I was courteously late for all appointments, but that was unacceptable in the USA. I had forgotten that if a class started at 8:00 a.m., I should arrive 15 minutes earlier or at least be on time. This reset to my inner clock was harsh. I still carry the music of the language spoken with soft “che” sounds. It grates on my ears to hear the City of Good Airs mispronounced.

But I presume you enjoyed attending art school?
My first art school: the smell, lighting, and echoes in those rooms resonated with my awareness of being in a circle of like-minded souls. Each project was an awakening, a revelation of inner potential.

Becoming a tourist in her own country

In your essay in the anthology Writing Out of Limbo, called “Artist in Transit,” you write about the difficulties of repatriation. I can relate! Eventually, you married a U.S. Navy officer and the pair of you ended up living in several different states.
After years of meeting Germans, Indians, and other assorted nationalities who congratulated me on my awareness of the culture of others but admonished me for my lack of knowledge about my native land, I decided that the Navy could serve as my passport to the United States—I would follow my husband, Roger, in his career. I particularly enjoyed being stationed in the Pacific Northwest, our final destination while he was active Navy. It offered the combination of climate from where I grew up in Maryland (think gardening), the temperate weather of Buenos Aires, and the emerald green and mists of the Indonesian Islands.

How did moving to different states compare to your earlier experience of moving from country to country?
The experiences were not dissimilar. Each place we lived in the United States had a different routine and a distinct local culture. Living in Ridgecrest, California (the Mojave Desert) was vastly different from living in San Diego—and that was within the same state! The Navy culture and traditions—those we carried with us everywhere. And having a child, a son, rooted me in life/home.

And now you live in Florida?
Now I am in a place that was not on my map—Florida, where I moved to be near my parents. Roger and I are rooted here by necessity, by the roof over our heads, his job, and my disability (chronic back pain).

I’m so sorry to hear about your back pain. That would be hard for anyone to endure, but especially an artist and a traveler! Going back to your upbringing: are you like many of us TCKs in that you tend to gravitate towards people who have similar interests and perhaps similar cross-cultural backgrounds? (And of course it’s not a given we’ll become fast friends…)
Identifying with people from my own culture is an ongoing process, and to this day I often find myself failing when making an effort to blend in. I suppose I am happiest with my dear old friends from my traveling TCK days and with those Navy folks from my ATCK days. And I was drawn to you, fellow author—Limbo brought us together because of the “resonance” we find in each other’s stories. Though we’ve never met in person, I am certain that if we did, we’d be comfortable and familiar with each other.

Something that resonated with me from your Limbo essay was your description of how you behaved on home leave during your adolescent years: “I began wearing a mask, holding back information, or my true stories and feelings.” I gather you found ways to express yourself through your art, as I did through acting. Are there particular art works of yours that express these feelings of transience or loneliness or instability—and what about the freedom, curiosity, and love of travel you’ve also experienced?
Yes. I can share several examples:

I created this painting, “Arrival”, a cleaned-up version of which was used on the cover of Limbo, when imagining what my son would see when serving in Afghanistan. That was a speechless, visual time for me. I wanted to paint endless versions of the same horizon until he came home. 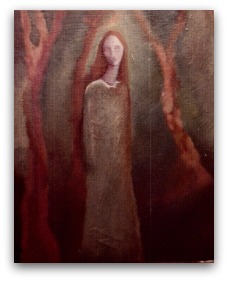 “Phantom in the Woods,” by Cathleen Hadley

Here I painted myself looking like a phantom standing in a dark and gloomy woods, which symbolized the closed-in feelings I had about transience, loneliness, and instability. The ghost is passing through the landscape of an imaginary world because “place” did not yet exist.

Bug Quilt, created by Cathleen Hadley for her son, Alan.

I asked my son to pick out whatever quilt pattern he wanted and I would make it for him. Of course he picked one that required a complicated technique called appliqué, which requires attaching small pieces of fabric to a larger piece. It was way out of my league—not on my list of quilting goals. But making Bug Quilt represented my love for him and my husband, and what it took to make a home for all of us.

What sort of artwork do you find yourself doing now? And is it influenced by any culture(s) and/or by your peripatetic upbringing?
Today, I am a conceptual artist adapting by necessity. I had worked with many wonderful local artists—but had to give that up in 2012 due to my recurring back pain, which influences the mediums I can and cannot use. For one year—as I sat on my terraced porch—with a view over trees directly across from where I sat, I took photos of the sunrise and the changing clouds. That view became my canvas. It was the most accessible art I had at the time. I call it the cloud photo series: 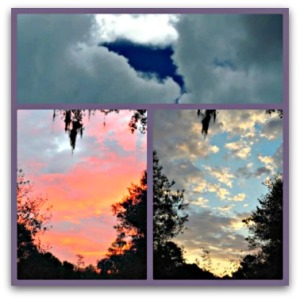 Three of the photos in Cathleen Hadley’s “cloud series.”

Today’s painting are these words on paper:

Time to open those boxes?!

I imagine that due to your back pain, you can no longer travel as you used to. But do you still have the ACTK’s “itchy feet”?
I have worse than itchy feet. How about itchy underworked imagination? Some days I’ll move wall hangings, rearrange the photos on display. Other days, it’s the furniture, or the books…anything that isn’t nailed down. My poor husband! For the first time, I am focusing on “place”. What would I do, what will I keep, to make this place more than a temporary home? As far as travel goes, the urge to travel and live elsewhere remains, but I am becoming a person who wants a home base as well. I consider myself to be in the transit lounge of my life. When we relocated to Florida, I became homesick for the first time for the Pacific Northwest. I am over that now.

Are you working on a new art project or projects?
I am in a period of transformation. From years of having to change or make do, I recognize it as a moment before something new emerges. It’s a slow and alone time and I hope to use it wisely (well). I am feeling remarkably undefined—and that is okay. I am making an art of managing expectations, trying to lose some of my structured behavior and let things unfold. Find my place and be satisfied. Not every day has to be an answer to an existential question. I am on a quest to be a homemaker—lay down the past and make a homey home. A home as a place to speak from, somewhere to simply be. Time to open those boxes!

Thank you, Cathleen. I do hope we get the chance to meet in person some day! Readers, I hope you’ve enjoyed getting to know Cathleen through this post. Please leave any questions or comments for her below.

10 responses to “TCK TALENT: Cathleen Hadley, Porteña at Heart and Artist by Calling”