Who is it that can tell me who I am? Third Culture Kid drama! 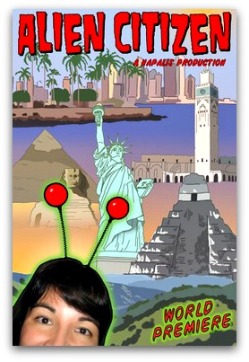 At the height of my own repeat expat experience—when I had a foot in Asia (Japan), Europe (UK) and North America (United States)—I often thought of this line from Shakespeare’s King Lear:

Who is it that can tell me who I am?

Prone to being somewhat melodramatic and hyperbolic (yes, I know I don’t have three feet!), I decided I’d peaked out too early. After all, Lear was an old man when he cast himself out and then had to grapple with what it feels like not to have a home or identity, whereas I was still a young woman.

It’s a good thing I was never a Third Culture Kid, or TCK—that’s all I can say, or else we’d be in for some MAJOR drama on this site. Instead we can leave that to someone much more suited: the actress Elizabeth Liang, who is the subject of today’s post. A self-described Guatemalan-American business brat of Chinese-Spanish-Irish-French-German-English descent, Liang was brought up by peripatetic parents in Central America, North Africa, the Middle East, and Connecticut.

Having faced the existential question of “Who are you when you’re from everywhere and nowhere?” practically from the moment of birth, Liang has channeled her thoughts into the creation of a one-woman show, Alien Citizen, which will have its world premiere in Los Angeles with performances this coming Friday and Saturday, May 3-4  (closing June 1). It’s being presented by Liang’s own company, HapaLis Productions, in association with the Multiracial Americans of Southern California.

Any TCKs reading this post (and/or their parents) should be happy to hear that Lliang’s play is not a tragedy. According to the press release, which she shared by email last night, Alien Citizen has both funny and poignant moments:

Though Liang is busy preparing for Friday’s opening, she was kind enough to answer a couple of my questions. Naturally, I wanted to hear more about why she’d written the play and the audience she had in mind for it. Here’s what she told me:

I wrote Alien Citizen for my fellow global nomads and TCKs, because we rarely see our stories portrayed on stage or screen. I also wrote it because I kept being asked if I was from the Midwestern USA and I wanted to set the record straight: my story is unusual, and, I hope, interesting. The play is about identity, which everyone grapples with, but I especially hope that everyone who has lived a cross-cultural life—anyone who has felt like a bridge or an island or both—will relate to it.

Aha, I knew it! It’s for the likes of me as well! And probably you, too, reader, if you’re a Displaced Nation regular. We could use a little drama in our lives…

A few choice lines from the drama

I also asked Liang to share some lines from the play. She obliged with the following list:

I must say, I like that one about everyone in the theatre being weird. Maybe I should have tried my hand at acting after repatriating? (Except at this point I’d choose to be a Korean soap opera star—yes, I know I’m displaced!)

Show our TCK performer some love!

Readers, it’s time we showed Elizabeth some love for what she’s up to this month. If you live in the LA area, get your ticket half price through May 25th and after that at regular price.

Questions for Elizabeth, calls for encores? (Should we invite her to submit a post on how the play was received?) Please leave them below. And on Friday evening LA time, let’s all shout out, from wherever we are in the world, “Break a leg, Elizabeth!”

STAY TUNED for tomorrow’s post, another installment in the life of our fictional expat heroine, Libby. (What, not keeping up with Libby? Read the first three episodes of her expat adventures.)

4 responses to “Who is it that can tell me who I am? Third Culture Kid drama!”