3 Comments Posted by The Displaced Nation Team on March 25, 2017 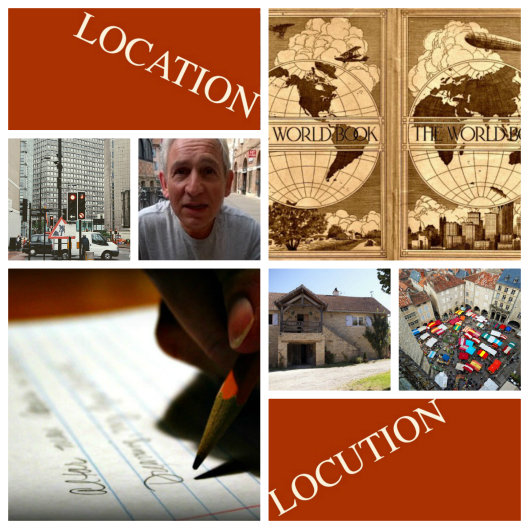 Tracey Warr is here with a fellow British novelist Stephen Goldenberg, with whom she’ll soon be appearing for a book talk in Villefranche-en-Rouergue. It’s one of France’s most beautiful villages and the setting for Goldenberg’s latest mystery novel.

My guest this month is fellow novelist Stephen Goldenberg, who was born, and has lived most of his life, in London. He now lives for a portion of the year in south-west France, a location that inspired his latest novel, Car Wheels on a Gravel Drive.

Goldenberg studied Law at Oxford University; but because of his love for reading great literature, he went on to train to be an English teacher. For the next 35 years he taught English in London secondary schools and became one of the first school teachers to introduce the subject of Media Studies.

Since taking early retirement, Goldenberg has written and published three novels and renovated an 18th-century stone-built farmhouse in the village of Calcomier in the Aveyron, a region of southern France named after the Aveyron River. He and his partner, Sue, have lived in the house for around five months a year for the last ten years. They try to be as involved as possible with the community, including helping out at the annual village fete. The house, Stephen says, is a perfectly peaceful place to write, especially on the small shaded terrace down by the river.

In addition to Car Wheels on a Gravel Drive, which came out last year and, as mentioned, is set in rural France, Goldenberg has self-published two other novels of suspense, both set in Britain: The Lying Game (Matador, 2012) and Stony Ground (Lulu, 2007). He says that his latest book reflects his fascination with the laid back rural French lifestyle and the lives of the many British expats who live there permanently. 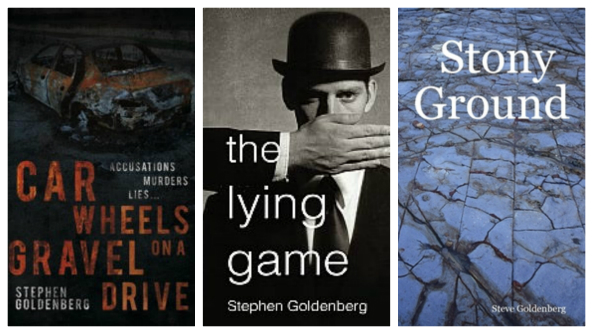 What’s next? Goldenberg will be back on his home turf. His next novel, The Autobiography of an Invisible Man, takes place in London and is based on the life of a man who occasionally modeled for the displaced Irish-born British artist Francis Bacon.

Welcome, Stephen, to Location, Locution. Which comes first when you get an idea for a new book: story or location?

For Car Wheels on a Gravel Drive it was definitely location. For my other novels, it’s been the story first followed by the assumption that it’s automatically going to be set in and around London because that’s where I’ve spent the vast majority of my life. But it was my partner, Sue, who suggested that I should set my next novel in south-west France since, by then, we’d had the house near Villefranche de Rouergue for six or seven years and were beginning to feel at home.

Your main characters are English expats?

Once I had my location, it was obvious to me that my main characters would be English expats who had relocated to rural France from London. And then, I decided that they would have made this move for the wrong reason—namely, because they were having troubles with their relationship and decided that a dramatic change of location and lifestyle would solve their problems. Also, at about the same time, the murder of an English expat, Jacqueline Wilson, who lived not far from us, had hit the headlines and gave me the idea of writing a murder mystery novel involving an Englishwoman who had recently relocated to the area.

For me, sense of place is always created through a very light touch approach. I’m not one for masses of detailed description or massive amounts of research. A cumulation of small details can create a strong atmosphere. I particularly like to include the slightly quirky or unusual. For example, my use of a real café/restaurant in Aurillac called L’Abside, which is in a strange building grafted on to the side of a church.

Much as I’m a lover of food, especially the cuisine of south-west France, it doesn’t play much of a role in my novels. In the case of this novel, it was very much about culture—especially the experience of expatriates trying to adapt to the language and culture of their adopted country in circumstances that are far from ideal. As far as the landscape is concerned, I wanted to write something that reflected my experience as a big city dweller getting used to the radical difference in moving to a small village in rural France.

Can you give a brief example of your latest work that illustrates place?

Jeremy had lost track of what day of the week it was until he drove into Villefranche at lunchtime and saw that the restaurants were crammed full. Of course. Thursday. Market day. He zigzagged around the stallholders in the Place Notre Dame packing their produce into vans, skipping out the way of the municipal dustcart hoovering up the fruit and vegetable detritus. He climbed the steps up to the terrace on the far side of the square and surveyed the café’s outdoor seating area, firstly to check that there was no-one there that he knew and, when he was sure of that, to find an empty table.

If it is the main setting, then the answer is very well. Even though I don’t include that much description in my actual writing, I need to have a clear sense of exactly where my characters are. However, I do not believe in doing too much research for novels and, sometimes, I slip in settings that I hardly know at all (e.g., Decazeville in the present novel) just because it was the most convenient town between Villefranche and Aurillac.

Location isn’t something that particularly attracts me in choosing which novels to read and often, I find writers who are too heavy on atmospheric description off-putting. But there are two writers who, I think, use location really well. Thomas E. Kennedy is an American who lives in Copenhagen and sets his novels there. It’s a city I’ve never been to but, thanks largely to his writing, I hope to pay a visit soon. And then there’s one of my all-time favourite writers, Richard Russo, whose novels are set in small town upstate New York. I visited the area a couple of years ago and, because of his writing, found it strangely familiar.

Thanks so much, Stephen, for your answers. It’s been a pleasure.

Readers, any questions for Stephen? Please leave them in the comments below.

As ML mentioned at the outset, Stephen and I will both be talking about our recent novels in Villefranche-en-Rouergue, France. The event takes place on 21 April 2017 at the English Library. All Displaced Nationers are welcome! For further details, please contact me at traceykwarr@gmail.com

Meanwhile, if you would like to discover more about Stephen Goldenberg and his novels, I suggest you visit his author site.

Thank you so much, Tracey and Stephen! I find it intriguing that Stephen tries not to over-research location, even when using an adopted home as a setting. He is right that it’s a balance, and authors can get carried away describing place. —ML Awanohara

Tracey Warr is an English writer living mostly in France. She has published three early medieval novels with Impress Books: Conquest: Daughter of the Last King (2016), The Viking Hostage (2014), and Almodis the Peaceweaver (2011), as well as a future fiction novella, Meanda (2016), set on a watery exoplanet, as well as non-fiction books and essays on contemporary art. She teaches on creative writing courses in France with A Chapter Away.

All other visuals use photos supplied by Stephen Goldenberg or book cover art.