LOCATION, LOCUTION: Novelist Dinah Jefferies melds themes of displacement and loss with the seductive beauty of the East

2 Comments Posted by The Displaced Nation Team on December 3, 2016

Tracey Warr is here with fellow historical novelist Dinah Jefferies. Dinah has led an unusually eventful life: not only has she lived in various countries but she has also suffered the loss of a child. These experiences have fueled a writing career that took off when Dinah reached her mid-sixties.

My guest this month is Dinah Jefferies, who was born in 1948 in Malaya—as Malaysia was known then—where she spent the first nine years of her life, growing up against the background of civil war. Once Malaya gained independence from England, her parents decided to move back home.

Dinah found it wrenching. As she told a UK magazine:

“I was incredibly happy in Malaya. We just wore flip-flops and pants at home; it was so hot… I loved going to the Chinese quarter with my amah, sitting cross-legged on straw mats with her family, eating bright yellow, strong-tasting ice cream. It was like nothing like I’ve ever tasted since.”

Moreover, England did not make a good first impression:

“I just remember absolute devastation when I saw what England was like: February, the middle of winter – grey, cold, wet; no sunshine; horrible clothes.”

Dinah was bullied at school, and although she defended herself, that “feeling of not being quite a member of anything has stayed with me all my life.”

This outsider status led to a certain restlessness, which should be familiar to any of our Third Culture Kid readers. As a teenager, Dinah lived in Tuscany and worked as an au pair for an Italian countess. Much later, with her second husband, she attempted to retire in a 16th-century village in Northern Andalusia—a plan cut short after they lost most of their money in the crash of 2008.

But the experience that shattered life as she knew it was the death of her son in 1985, when he was just 14. Formally trained as an artist, Dinah channeled her unrelenting grief into her art work. Later her move to Spain afforded an opportunity to experiment with fiction writing. After settling in Gloucestershire to be near her grandchildren, she took to writing full time and found she enjoyed weaving her experiences of loss and displacement into stories set in the “extremely seductive beauty of the East.”

Dinah’s first published novel, The Separation, came out in 2014, when she was 65 years old. Set in 1950s Malaya, the book tells the story of a mother who journeys through the civil-war-torn jungle to find out why her husband and daughters moved up country without her.

Dinah landed a contract with Viking Penguin for that book and has produced a novel for them every year since:

To research her books Dinah has traveled to Sri Lanka, Vietnam and India. She will be speaking at the Fairway Galle Literary Festival in Sri Lanka in January, should any of you Displaced Nationers find yourselves in that part of the world.

Welcome, Dinah, to Location, Locution. Which tends to come first when you get an idea for a new book: story or location?

For all four of my books the location came first, though story comes a very close second. Once I’ve decided on the place, I then research the period and usually while researching that, the kind of characters I want begin to emerge. Sometimes I have the kernel of an idea before I hit on the location. For The Tea Planter’s Wife I did have the idea of a life-changing secret before I chose Sri Lanka—or Ceylon as it was then known.

What is your technique for evoking the atmosphere of the various places where you’ve set your four novels?

It’s all about sensory detail. For my third book, The Silk Merchant’s Daughter, set in Vietnam, it was all about evoking the contrast between the elegant French quarter of Hanoi, as opposed to the clutter and noise of the ancient Vietnamese quarter with canaries singing in bamboo cages and the scent of charcoal and ginger in the air. The setting has to work to support the story in some way, and as this is a story of a woman caught between two worlds. I needed to show how different those two worlds were.

All those and more. I include everything I can to create the atmosphere of the place and the time. For historical fiction, one has to get the historical details right, too: the type of buildings, what people wore, their mindset, etc. It’s about what the characters would be seeing in their daily lives and how they would be interacting with their surroundings. For me the landscape has to almost be a character in itself. I try to re-create the beauty of the world in question as well as its unique personality.

From The Tea Planter’s Wife:

“Below her, gentle, flower filled gardens sloped down to the lake in three terraces, with paths, steps and benches strategically placed between the three. The lake itself was the most gloriously shining silver she’d ever seen. All memory of the previous day’s car journey, with its terrifying hairpin bends, deep ravines, and nauseating bumps, was instantly washed away. Rising up behind the lake, and surrounding it, was a tapestry of green velvet, the tea bushes as symmetrical as if they’d been stitched in rows, where women tea-pickers wore eye-catching brightly coloured saris, and looked like tiny embroidered birds who had stopped to peck.” 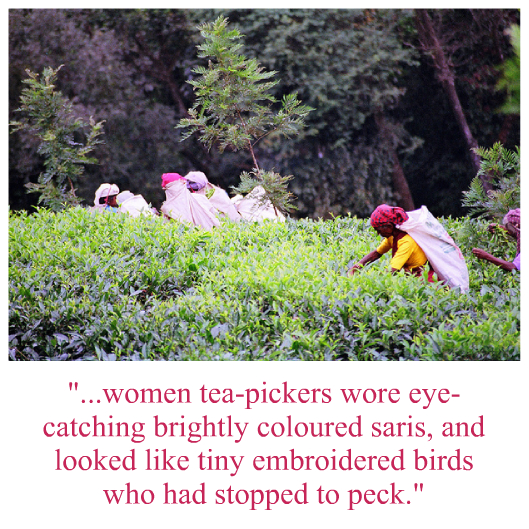 I like to know it as well as I can and I always visit a location I’m planning to use. Just being in a place can help in ways you never could have imagined if you hadn’t been there. When doing research for The Tea Planter’s Wife, I was staying at a tea plantation in Sri Lanka and found a library of wonderful books I’d never have known about back home. Those books provided me with amazing details, as did sitting outside in the evening watching the fireflies and listening to the cicadas. Being there made it real.

I love Julia Gregson’s book East of The Sun for the way it evokes a particular time in India. Also Simon Mawer’s The Girl who Fell from the Sky set in wartime France. Both are great books with terrifically realistic settings that are an important element of the story. 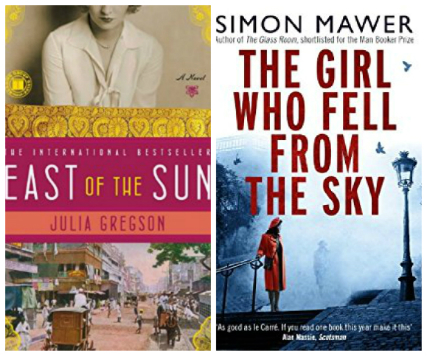 Interesting! I should tell you that one of my other guests, the novelist Hazel Gaynor, chose your books—The Tea Planter’s Wife and The Silk Merchant’s Daughter—in answer to this question. Also, my very next guest will be one of your picks, Simon Mawer.

Thanks so much, Dinah, for joining us. It’s been a pleasure.

Readers, any questions for Dinah? Please leave them in the comments below.

Thank you so much, Tracey and Dinah! Dinah, your Third Culture Kid story tells us so much about you. I wonder if it’s the reason location comes first, before story? And hats off to you for starting a writing career in your sixties. What a tribute to resilience, as well as to the therapeutic power of art! —ML Awanohara

Tracey Warr is an English writer living mostly in France. She has published two medieval novels with Impress Books. She recently published, in English and French, a future fiction novella, Meanda, set on a watery exoplanet, as an Amazon Kindle ebook. Her latest medieval novel, Conquest: Daughter of the Last King, set in 12th-century Wales and England, came out in October.

2 responses to “LOCATION, LOCUTION: Novelist Dinah Jefferies melds themes of displacement and loss with the seductive beauty of the East”