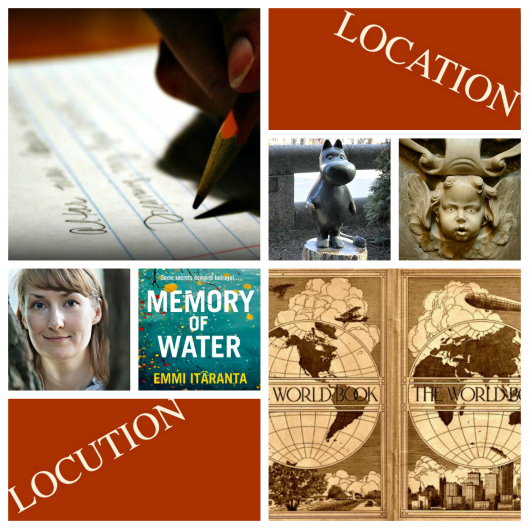 Tracey Warr is here with a Finnish-born writer Emmi Itäranta, for whom displacement means living in another country (England) and writing dual-language dystopian novels. As a special note to long-time Displaced Nation readers, the book that had the greatest impact on Emmi as a child was Alice in Wonderland—until she discovered science fiction and fantasy.

Greetings, Displaced Nationers. My guest this month is Emmi Itäranta, who grew up in Tampere, a city surrounded by two lakes in southern Finland.

And if her childhood was spent in a territory located between Lakes Näsijärvi and Pyhäjärvi, she has chosen to spend her adulthood afloat between two languages, Finnish and English.

After earning an MA in Drama from the University of Finland and temping for a few years in jobs ranging from scriptwriter to press officer, she challenged herself to do an MA in Creative Writing in English at the University of Kent in the UK. As part of that course, she began writing her first novel, Memory of Water, working in English and Finnish simultaneously. As that title suggests, it’s set in a dystopian future where fresh water is scarce. 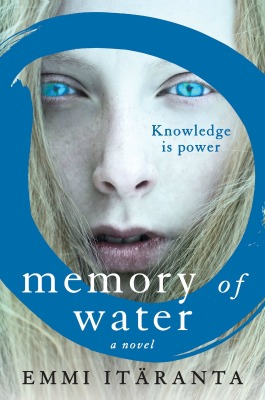 England is now Emmi’s home: she has lived in Canterbury since 2007. But she continues to write fiction in both English and Finnish. (She speaks English at home with her Spanish husband.) Emmi feels that her books would be different altogether if she wrote them in only one language. In answer to an interviewer’s questions about the dual-language process that produced Memory of Water, she had the following to say:

I began writing the book in English because part of it formed my creative writing dissertation at the University of Kent, but early on I realised that drafting it in Finnish at the same time helped me polish the writing. The two languages seemed to support and inform each other. You get very, very close to the text when you work in two languages; translators often spot details that the author and editor may have missed. It is a slow process, and hard work, but ultimately I find it rewarding.

Emmi has now come out with her second novel. Published in Finnish in 2015, it has just now made its English-language debut in the UK with Harper Voyager, under the title The City of Woven Streets. The U.S. edition, to be published later this year, will be called The Weaver. 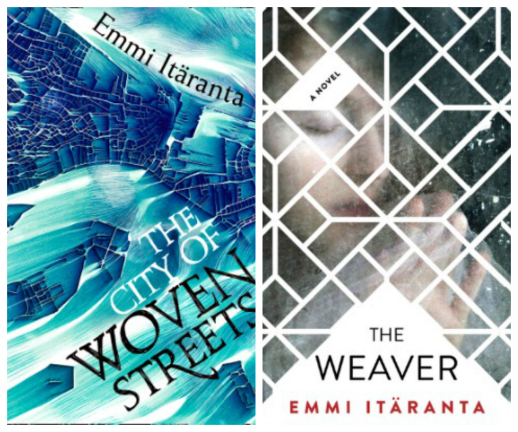 The City of Woven Streets / The Weaver is a story about an island that is slowly sinking into the sea (if Emmi’s first book had too little water, this one has too much), and where dreaming is forbidden. It has elements of urban fantasy but its world has a feel of the past, rather than present or future. In a city where human life has little value, you must practice a craft if you want to stay alive.

Now let’s talk to Emmi about she gets her readers to experience these extraordinary settings.

Welcome, Emmi, to Location, Locution. Which comes first in your novels, story or location?

For my second novel, The Weaver / The City of Woven Streets, the location came first. I saw an imaginary city with its strange own internal laws and spent months writing scenes that simply explored the setting but were not yet connected by a story. This surprised me because in my first book, Memory of Water, the story and location were intertwined from the beginning. For that book, the first image that came to me was a young woman preparing tea in a dry future world. The story called for a specific location—far north, near the Arctic—and the location shaped the story.

For those who haven’t read Emmi’s first novel yet: The main character, Noria, lives near present-day Kuusamo, northern Finland, where she is learning to become a tea master in her father’s footsteps. By then Finland is ruled by an Asian superpower, and water for tea is a rare treasure.

Emmi, your novels have a strong sense of place. Can you tell us what techniques you use for evoking those feelings in your readers?

I try to imagine how the characters would experience the place through their senses. What are the shapes and colours surrounding them? How does the air smell and taste? How does the ground feel under their feet, what sounds does it make as they walk? What do they notice, what is relevant to them individually, but also as part of the community that inhabits this setting?

All of those, but I would also add things like weather and seasons. Furthermore, I think a sense of history is important, in fiction just as it is in real life. Even if we don’t know the history of a location in detail, the feeling that there is one helps make it more plausible and gives it depth.

Did you have any real cities in mine when you created the city in The Weaver / The City of Woven Streets?

Yes, The Weaver / The City of Woven Streets is set in a fantasy world but to make it feel tangibly real, I used my knowledge and impressions of old European cities I have visited, mainly Prague, Venice and Dubrovnik. 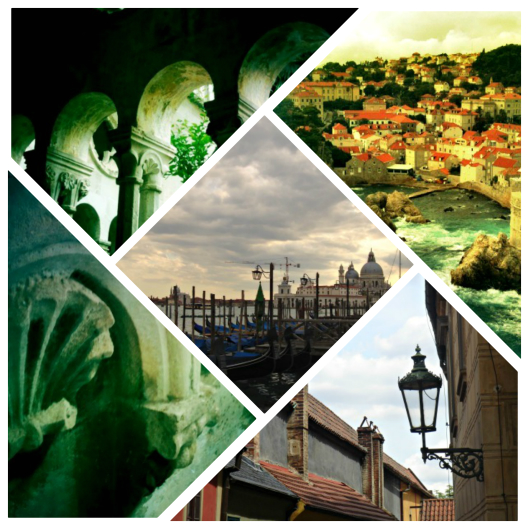 I’d like to share a passage from the first chapter of The Weaver / The City of Woven Streets. It aims to create a sense of the surroundings my main character, Eliana, lives in, a world that is unfamiliar and recognisable at once:

I like the air gondola port because you cannot see the Tower from there: its tall, dark figure is concealed behind the wall and the buildings of the House of Webs. Here I can imagine for a moment that I am beyond the reach of the Council’s gaze. I like the port best at this hour, when the cables have not yet started creaking. The vessels are still, their weight hanging mid-air, or resting at the dock, or floating in the water of the canals. The gate cracks open without a sound. The wrought iron is cold against my skin, and the humidity gathered on its surface clings to my palms. The cable of the air route dives into the precipice, which begins at the rock landing of the port, and the city opens below. I walk along the landing close to the brink. It is steep as a broken bridge. Far below, the sharp edges of Halfway Canal cut through the guts of the island, outlining waters that always run dark, even in brightest summer light.

The sky has begun to fade into the colours of smoke and roses. The first light already clings to the rooftops and windows, to the glint of the Glass Grove a distance away. The flood has finally ceased to rise, and down in the city the water rests on streets and squares. Its surface is smooth and unbroken in the calm closeness of dawn: a strange mirror, like a dark sheet of glass enclosing a shadow double of the city. 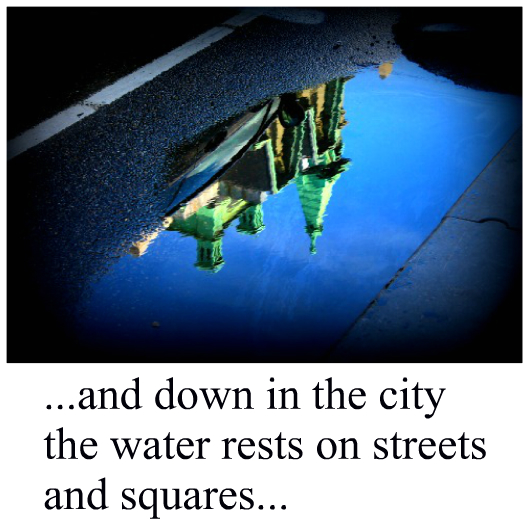 My stories tend to be set in the future or entirely fictional worlds, so you could say the settings are imaginary for the most part. However, I do use real places as inspiration and find that visiting them where possible really helps bring the fictional setting to life. For The Weaver / The City of Woven Streets, I looked at photographs and journals from my visits to different cities, particularly those with a long history. I’m always interested in trying to understand how different eras have shaped a place. So the end result becomes a mixture of imagination, history, memory and subjective experience.

There are so many, but the first one that comes to mind is China Miéville and the strange geography of his novel The City and the City. It portrays two fictional cities that overlap, yet are distinct from each other with their own unique and recognisable features, cultures and complex unspoken agreements that define the border between the two. The setting almost becomes a character in its own right. 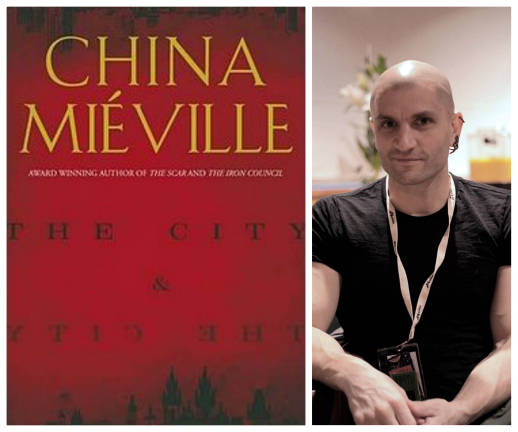 Thanks so much, Emmi, for your answers.

Readers, any questions for Emmi? Please leave them in the comments below.

Thank you so much, Tracey! I loved hearing about the way Emmi’s imagination works, feeding on everything from linguistic differences to her travels within Europe. —ML Awanohara

Tracey Warr is an English writer living mostly in France. She has published two medieval novels with Impress Books. She just now published, in English and French, a future fiction novella, Meanda, set on a watery exoplanet, as an Amazon Kindle ebook. Her new historical novel, Conquest: Daughter of the Last King, set in 12th century Wales and England, will be published by Impress Books in September.

Photo credits: Top of page: The World Book (1920), by Eric Fischer via Flickr (CC BY 2.0); “Writing? Yeah.” by Caleb Roenigk via Flickr (CC BY 2.0). Emmi’s author bio photo is by Heini Lehväslaiho. All other photos were supplied by the author or downloaded from Pixabay except for 1) in top collage: Cherub (Canterbury, England), by Upupa4me via Flickr (CC BY-SA 2.0); and 2) in bottom collage: Author China Mieville at Utopiales 2010 (France), self-photographed, via Wikimedia Commons (CC BY 3.0).