1 Comment Posted by The Displaced Nation Team on February 3, 2016

Columnist Lorraine Mace, aka Frances di Plino, is back with her latest interview guest.

Part of being an Irish emigrant, whether in the UK or farther afield, is a nostalgia for the homeland and its green fields and rich, dark soil—as my guest this month, crime writer Sheila Bugler, will attest.

Sheila grew up in a small town in the west of Ireland. After studying psychology at University College Galway, she left her native land for a life abroad, working in Italy, Spain, Germany, Holland and Argentina. Today she lives with her husband and two children in Eastbourne, a seaside resort town on the south coast of England. Despite being settled in the UK, she pines for Ireland and describes herself as a “reluctant emigrant.”

What’s more, these intense feelings for the Emerald Isle are what fuels her creative efforts. Sheila is the author of an acclaimed mystery series published by Brandon Books, an imprint of Ireland’s O’Brien Press, consisting so far of three books of a planned six: Hunting Shadows (2013), The Waiting Game (2014), and All Things Nice (forthcoming, April 2016). The series features Detective Inspector Ellen Kelly, a character whose “Irish roots shine through,” as one Amazon reviewer puts it, and is set amongst the displaced Irish community in southeast London.

As Sheila remarked in an interview with Triskele Books:

I adore Ireland and miss it (despite being very happy in the UK). For me, writing really is a way of connecting with my country. I write Irish characters (not exclusively, of course) and it was always very important to me that Ellen’s roots were Irish. At the moment, I can’t imagine writing a novel that doesn’t have some connection to Ireland.

Her characters, too, are inspired by place: by the bleak wilderness of the North Kent coast. Perhaps they find it reminiscent of the bleak and beautiful Aran Islands off the coast of Galway?

But let’s not get too carried away. It’s time to give Sheila the floor and hear what she has to say about location, locution.

Welcome, Sheila, to Location, Locution. You have a strong sense of place in your writing, but tell us, which tends to come first, story or location?

Thank you for inviting me, Lorraine. In answer to your question: Story. But often there is a single image, in a particular place, which is the inspiration for that story.

What techniques do you use for evoking place in your crime stories?

I am quite an instinctive writer and try not to overthink the process as it happens. Of course, like all writers I have had to learn the basic techniques, but I don’t think you can force yourself to write in a particular way. Although location plays an important part in my novels, this isn’t a deliberate choice—it’s something that happens naturally as I write.

I like the way location can enhance a particular atmosphere you are trying to create. In my first two novels, Hunting Shadows and The Waiting Game, parts of each book are based in the beautiful, bleak Hoo Peninsula of north Kent.

In Hunting Shadows, this is the perfect location for one of the central characters, Brian. He is an isolated loner and the isolated landscape is a great way of showing how Brian lives his life. In contrast, there is a character in The Waiting Game who uses the Hoo’s wide open spaces and big skies as a backdrop to her work as an artist.

If I am struggling to create a sense of place, I will do some or all of the following: 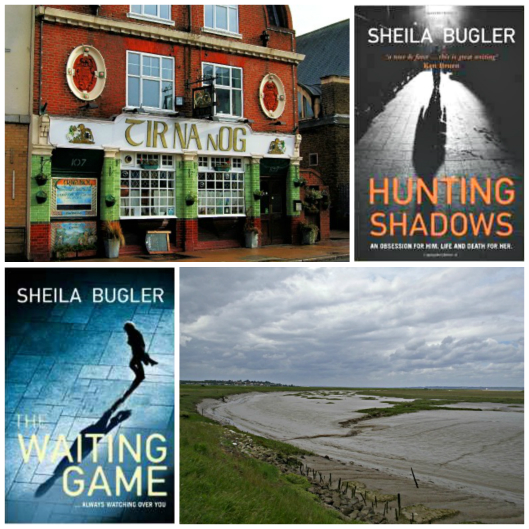 Which particular features have you used to create a sense of what clearly is to you a special location? Landscape, culture, food?

Obviously it’s all of those things. However, you don’t need to use every one of them to evoke a sense of place.

The author JJ Marsh, for example, puts a lot of importance on food when she is writing about the different locations in her novels (I should add she doesn’t just write about food!).

The Irish noir writer Ken Bruen perfectly evokes the city of Galway[https://en.wikipedia.org/wiki/Galway] with almost no reference to the external landscape. Instead, he brings the city to perfect life through his characters’ voices and the internal spaces, particularly the pubs. Likewise, Ian Rankin manages to perfectly evoke his home city of Edinburgh without ever needing to give us “in your face” descriptions.

As in real life, your characters move through a rich world of noises, smells, colours, places and other people. If you don’t forget that when you are writing, then neither will your readers.

I’m pleased you mentioned JJ Marsh. She was the original creator of this column! But returning to your own works: can you give a brief example from your writing that illustrates place?

First, a short scene from my novel, Hunting Shadows. In this scene, I tried to give an impression of the location through the reactions of the two characters:

Ellen stepped out of the car and looked around. The place reminded her of the black-and-white photos in her parents’ house of old Irish towns. It gave her that same feeling that she was observing somewhere from a time long past. Apart from a scattering of houses—a mixture of semi-derelict Victorian cottages and cheap, flat-roofed eyesores—there was nothing else.

From where she stood, the landscape sloped down to the Thames marshes, bleak and desolate under the heavy sky.

Ellen frowned. “What? I can’t hear anything.”

“Duelling banjos,” he said. “I knew it. “Deliverance” country. We’re not safe in a place like this.” 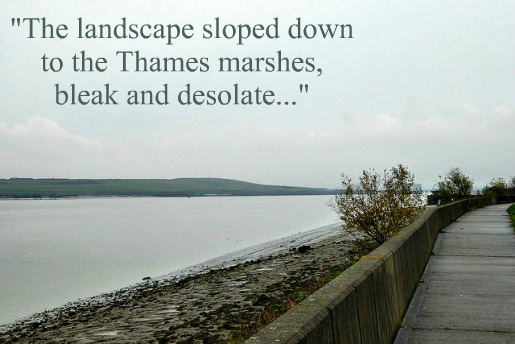 And here is a very different piece from a stand-alone novel I am working on called Walk Away. I don’t normally write this descriptively but my own love for this part of Ireland obviously influenced me:

The town was on the southern edge of Galway Bay, the hills of the Burren sloping up behind it, the vast sweep of the Atlantic Ocean stretching out in front of it. Next stop America. It was beautiful. He knew that. Probably always had.

Sydney was home these days. A modern, open-plan apartment with muted colours, floor to ceiling windows and views across Sydney Harbour. All very tasteful and perfect for a shit-hot, sharp-dressing, arse-kicking, wheeling-and-dealing corporate lawyer.

But this, he had forgotten. The way the limestone landscape seemed to move as the light reflected off it. Changing colour all the time from purple to pale pink to grey and back to purple again, in harmony and contrast with the sea.

How well do you need to know a place before using it as a setting?

If you are using a real location as a setting, you need to know enough about it so it seems real to your reader. In today’s world, there is no excuse not to do this. We all have access to the internet and Google maps. If you haven’t visited a place, do some basic research and make sure you include this in your novel. Using a real pub, for example, instead of making one up can really add to the sense of authenticity.

I once read a crime novel set in Lewisham (where I was living at the time). In one scene, a character is walking down Lewisham High Street and bemoaning the lack of a Marks and Spencer’s. We have M&S in Lewisham! This—and other aspects of the novel—made it clear to me the writer had never been to Lewisham and didn’t know anything about the place he was writing about.

Of course, we can also write about fictional locations. If you do that, your own sense of the place needs to be well-formed before you write about it. The important thing is this: whatever location you choose, it must feel authentic for the story you are writing.

For many reasons, I hold Ken Bruen up as a master when it comes to using location in his novels. He perfectly evokes Galway city, capturing not only its beauty but also the voices and characters of the people who live in that very special place. He is my absolute writing hero.

Thanks so much, Sheila!

Readers, any questions for Sheila Bugler? Please leave them in the comments below.