3 Comments Posted by The Displaced Nation Team on August 10, 2017 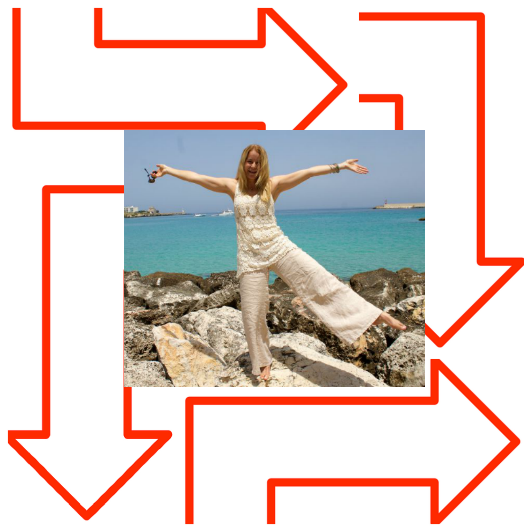 Readers, I’m happy to report that Chandi Wyant came up with a winning algorithm for her new memoir, Return to Glow: A Pilgrimage of Transformation in Italy. She is therefore proceeding to the second round of the Expat Author Game.

During this round, we’ll be trying to see how closely she measures up to the Displaced Nation’s (admittedly somewhat quirky) notion of an “international creative.”

On the face of it, Chandi has a solid claim to being “international.” Not only has she lived in Europe (Italy, Switzerland, and England) but also in South Asia (India) and the Middle East (Qatar).

That said, she recently confessed to one interviewer that after spending so much of her life abroad, she developed a huge appreciation for her native California:

I see it now as one of the most beautiful and healthy places in the world to live. Not only does it have every kind of stunning landscape you could want, it has an abundance of organic food, and an abundance of educated people who know how to think critically. I’m not too impressed with the US right now—but if I look at California just on its own, it’s a darn close second to Italy.

Furthermore, I think it’s fair to call Chandi “creative”. She was encouraged from a young age to paint and draw a lot, with the result that she often “sees photographs” in the world around her. (Notably, she shares one of her actual photos below.) Writing is also important to her. While in Qatar, she taught history at a local college and got to know a lot of young Qataris. She conducted interviews with some of them and some day hopes to turn those interviews into a book. That’s in addition to the memoir she just produced about her pilgrimage along the Via Francegena.

Even the title of her personal Website is creative: Paradise of Exiles, which is what the Romantic English poet Shelley called Italy.

But now it’s time to see how Chandi manages Round Two, where points are scored for intangible indicators of an expansive, global outlook and the ability to take a creative approach to exploring the world.

Welcome back, Chandi, and now let’s get started. Many residents of the Displaced Nation have had a moment or two when they’ve felt like a character in Lewis Carroll’s Alice in Wonderland, myself included. How about you? Or if you’d prefer, you can use a quote from another children’s book.

“You have brains in your head.
You have feet in your shoes.
You can steer yourself
any direction you choose.”

The feet in the shoes and any direction you choose reminds me of the time I got lost on my solo pilgrimage in Italy. My feet in my shoes were not doing well. I had developed plantar fasciitis and had bought arch supports but they were sliding around in my shoes. It was super hot, it felt like there was a gremlin in my shoes stabbing my heals, and I was lost in stark wheat fields somewhere south of Siena. Then I simply chose a direction, and by making a choice, I was able to stop being anxious about how to find my way.

Moving on to the next literature-related challenge: According to George Elliot’s Maggie Tulliver, the best reason to leave her native village of St. Ogg’s would be to see other creatures like the elephant. What’s the most exotic animal you’ve observed in its native setting?

An oryx in Qatar. It’s a large species of antelope that is native to the Arabian Peninsula. It nearly went extinct due to poaching but has been reintroduced.

Last but not least on this series of literary challenges: We’re curious about whether you’ve had any Wizard of Oz moments when venturing across borders. Again, please use a quote or two.

GOOD WITCH GLINDA TO DOROTHY: “You are capable of more than you know.” Definitely the capability thing comes up a lot when I travel alone (or move alone) to far flung places, both of which I seem to do. I didn’t necessarily set out to travel alone and move abroad alone so many times in my adult life. It all started when I was 19 (that was in the 80s), when I did a budget backpacking trip in Europe with a friend. After four months of travel together, we split up in Istanbul. In my first 24 hours of solo travel, all kinds of crazy things happened and I quickly learned that as soon as you cut through the fear and embrace the world, that it embraces you back. (These stories are recounted in more detail in my book.)

Moving on to another dimension of creativity: telling tales of one’s travels through photos. Can you share with us a favorite photo you’ve taken recently that in some way relates to your creative life, and tell us why it has meaning for you?

This one I took recently in Lucca, Italy (where I now live). It has meaning because doorways like these symbolize for me an opening of consciousness, and an invitation to step into mystery.

And now for our interplanetary challenge: Can you envision taking your exploration of other modes of being beyond Planet Earth? How about a trip to Mars?

I don’t want to offend anyone who is super into Mars but I have no interest in going to Mars or any other planet. I am awed by the planet we have and how special it is, and it’s an enormous shame that we’ve not learned to respect it and take care of it. I am much more interested in how we can better appreciate and take care of planet Earth, rather than attempt to get to Mars, which clearly is vastly inferior to Earth, as far as sustaining life.

Congratulations, Chandi! Just as I suspected, you easily rose to the challenge of Part Two of our Expat Authors Game. Personally, I found your Dr. Suess citation inspired! Readers, are you ready to score Chandi’s performance on Part Two? How did she do with her literary references? And what about that animal of hers: rather unusual! And don’t you like that photo of her up top, looking so joyful in an Italian setting? She says she hasn’t mastered the technical side of photography, but that photo of the doors in Lucca suggests otherwise…

Finally please note: If you want to keep cultivating your inner glow under Chandi’s influence, be sure to check out her author site and its companion Facebook and Instagram pages.

Photo credits: Photo of Paul and the ocean supplied; all other photos from Pixabay.

3 responses to “EXPAT AUTHOR GAME: What score does Chandi Wyant earn on the “international creative” scale? (2/2)”