DIARY OF AN EXPAT WRITER: A summer of unwinding, recharging & charging ahead

Leave a comment Posted by The Displaced Nation Team on September 3, 2017

American expat in Hong Kong Shannon Young has been updating us on her quest to become a full-time writer since her first post in October 2014, nearly three years ago. As her summer 2017 update shows, she’s come a very long way!

It’s a bright, sunny day in Hong Kong, and summer is in full swing. This is the time of year when even the tourists are hesitant to go out and brave the muggy weather here in the sub-tropics. I’m already back at work in my usual Starbucks after my own summer travels.

Since my last update in the spring, I’ve been busy finishing the fifth and final book in my young adult fantasy adventure series, Steel & Fire. Night of Flame launched on May 20th, wrapping up my second major series under my Jordan Rivet pen name. (The first is the Seabound trilogy.)

I think it’s safe to say that the Jordan Rivet name is here to stay.

The end of May also marked the first full year in which my writing income matched or exceeded what I earned in my previous day job.

It seemed like a good time to go on holiday!

JUNE: Something of a writing break

In June, I spent four weeks with my family in Arizona. My fellow members of the Displaced Nation know what this entails: catching up on a year’s worth of quality time, eating at all your favorite places, and noticing all your home country’s idiosyncrasies.

One thing that always surprises me when I go home is the sheer number of choices in the grocery stores. You can buy anything you want in Hong Kong, but in the United States there seem to be infinite variations of each thing. (For example: I counted eleven different types of M&Ms in a single convenience store.) I also notice how much strangers make small talk. There’s usually an adjustment period where I stare blankly at cashiers who ask about my day. I can no longer tell how much people actually want to know when they strike up a conversation.

Since I’d just wrapped up my fantasy series, I decided not to set any serious writing goals for this summer. I made a few final edits to the side project I wrote while working on Night of Flame. This book, a post-apocalyptic story in a different vein than my Seabound series, is my tenth Jordan Rivet novel, and I think it’s the best yet. I’m currently exploring the possibility of going hybrid with it (i.e., finding a traditional publisher for some books while continuing to self-publish others). I’ll keep you posted on how it goes, Diary.

Of course, I can’t stay away from writing completely. My mom and my 15-year-old sister both enjoy writing, and we had a few great work sessions at cafés around Arizona. I even got to read the first chapter of my sister’s novel-in-progress (it’s awesome). Being an expat means it’s especially noticeable when younger family members grow up in leaps and bounds while you’re away. I’m coming up on my seven-year anniversary in Hong Kong, and it’s nice that my youngest sister and I have started connecting over this shared passion.

During those sessions with my family, I worked on the worldbuilding and outlines for my shiny new fantasy series. This trilogy will be set in a different world than my Steel & Fire series, which means I get to invent a new magic system and figure out new hierarchies and political systems.

My goal for this series is to appeal to the same readers who enjoyed Steel & Fire while also being able to try all kinds of different things. The books will follow a single point-of-view character, and I’m going for a tight, tense plot rather than something sweeping and epic.

I ended up outlining all three books for the new trilogy while I was in Arizona, though I’m sure the details will change as I get into it.

JULY: Indie author reunion in London & a week in Iceland

From Arizona I flew to London to meet up with my husband, who was finishing up a business trip. While there, I met with a group of indie authors who have been a huge part of my writing life over the past two years. We are all members of the same Facebook group, and these writers have taught me many of the strategies that have contributed to my self-publishing success.

Though nervous about meeting Internet friends in real life, I found it even better than expected. The author life can be lonely, and it’s good to talk shop with people who are building their careers in the same way I am. All of us are trying to figure things out, often through trial and error. It’s been wonderful to share the journey.

From London, my husband and I flew to Iceland for a week-long trip we’d been talking about taking since we met, almost ten years ago. I know it’s a trendy place to visit right now—and it completely lives up to the hype!

Iceland also proved the perfect place to visit while the worldbuilding for my new series was kicking around in my head. Many of the places in that world aren’t set in stone yet, and I ended up adding a bit of Icelandic flavor to my mental images. 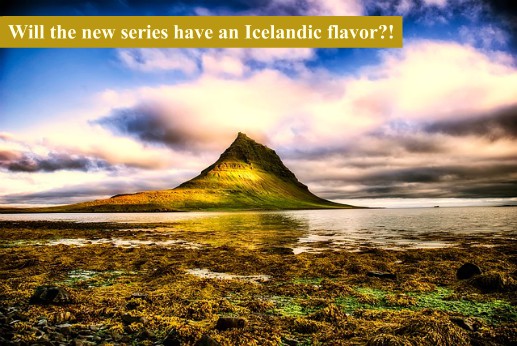 END-JULY TO AUGUST: Glad to be back in the writing saddle!

By the time I returned to Hong Kong, I was chomping at the bit to get started on the new series. After a day to recover from jet lag, I hit the ground running on the first book. After thinking about it all summer I had a pretty clear idea of how it was going to turn out. Of course, there are always surprises in the writing process, and this book was no exception.

Though the beginning went slower than anticipated as I got to know the new characters and started filling out their world, I finished the rough draft in just under three weeks. As always, I’m sure it’s going to need a lot more work. Coming in at less than 60,000 words, I think it’s missing a few chapters that will help bring the world to life.

I’ve printed out the draft, and it’s burning a hole in my bag right now, just waiting for me to open it up and start reading.

Even though summer is not yet officially over, I’m happy to be back to work. It’s always nice to get out of Hong Kong, but it’s good to be home, too.

I first started writing when I moved to Hong Kong, and this is still where I do it best. In a few weeks, I will be able to apply for permanent residency, another step along the road to establishing a lasting place for myself here.

I think I’ll always feel like an expat, a little displaced, a little homesick. But the baristas at my Starbucks seem happy to see me, and for now at least, this is home.

As always, Displaced Diary, thank you for listening.

Shannon, I can still remember clearly when you started this column. You weren’t at all sure you could make this full-time writing gig work. And now look at where you are. Amazing! And you’re even applying to become a permanent full-time resident of Hong Kong? Wow! The displaced writer’s life clearly suits you. Keep on keeping on, that’s all I can say! ~ML