1 Comment Posted by The Displaced Nation Team on April 6, 2016

The last time we heard from American expat in Hong Kong and aspiring writer Shannon Young, she was hatching some big plans for 2016. So, how many books has she managed to crank out since? Prepare to be amazed…!

As you may recall, two months ago I laid out my goals for the beginning of 2016:

#1 Ferry Tale launched in ebook and paperback just in time for Valentine’s Day. It’s a classic romantic comedy with a modern twist, featuring an American woman and a Chinese Canadian man. Here’s the cover, designed by James at GoOnWrite.com: 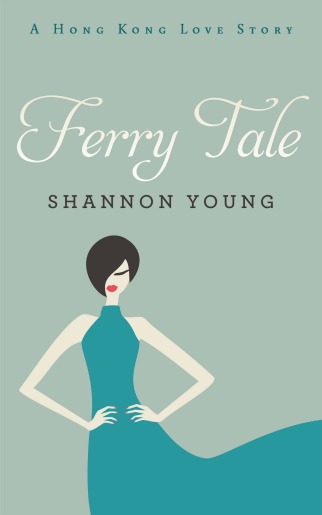 #2 The Complete Seabound Trilogy Box Set launched in March, along with one of my most successful promotions to date. This is a compilation of the post-apocalyptic adventure set at sea that I released over the course of 13 months, starting in November 2014. (I’ve reported about my progress on this in previous diary entries.)

#3 Duel of Fire is finished, edited, polished, and formatted. It went on sale last Friday, April 1st, right on schedule (no fooling!). Here is the cover from Deranged Doctor Design. PLEASE NOTE: It costs $0.99 for the first week, so definitely pick up a copy SOON if you like sword fights, magic, adventure, and a hint of romance!

I’m currently hard at work on the sequel, King of Mist, which will come out in May.

You might notice that these books are published under two different names. Shannon Young is the name given to me at birth, and I picked my pseudonym, Jordan Rivet, myself.

Have you ever wondered about that, Dear Diary? Were you thinking I might have a dual personality?

The simple answer as to why I write under two names is branding. Looking at those two book covers, which hopefully communicate their genres at a glance, you’d never know the same person wrote the books. They are not similar in any way, so you would never scan past Duel of Fire in a listing of books on Amazon and think: “It’s another Shannon Young book! I have to stop and click!”

You probably wouldn’t even be looking at the same lists. Although some readers enjoy both epic fantasies and romantic comedies (I like to read both, after all), for the most part these books are targeted to distinct groups.

To some, I am known as Shannon Young

The Shannon Young “brand” is already quite eclectic. It includes a bit of travel, a bit of romance, some stuff about being an expat, and some stuff about being a millennial. These bits and pieces are a reflection of my writing journey—and myself as a person. However, they haven’t established me as a type of author in the way that, say Nicholas Sparks, Jodi Picoult, or Malcolm Gladwell are understood to represent a particular type of book.

Indeed, although my Shannon Young work represents me as a growing and changing person, my first love as a reader has always been fantasy and science fiction.

Diary, I seem to be evolving in the direction of a Nora Roberts. Roberts is of course known for one type of fiction (romance), whereas her pseudonym, JD Robb, is famous for another type (futuristic scifi police procedurals). Except that I’m approaching it the other way around: building a brand around my pseudonym first, as my Jordan Rivet books outsell my Shannon Young books by a significant margin. Launching the Jordan Rivet name meant launching an income-generating career.

When I started the Seabound Chronicles, a post-apocalyptic adventure set at sea, I already knew it wouldn’t match my existing books. My readers wouldn’t necessarily follow me quite that far across a genre divide. I also knew I’d likely write some high fantasy when I became a good enough writer to try my hand at my very favorite genre of all. Since I’d be starting from scratch with my readership, I figured I’d go the whole way and create a new Science Fiction & Fantasy (SFF) brand.

The Jordan Rivet name has never been a secret identity (unlike JK Rowling’s Robert Galbraith), but I had fun choosing the name and thinking about how to present the brand. It was a creative exercise just like developing a character for a novel. I wanted a name that was:

And the name I settled on even pays homage to one of my favorite fantasy writers (RIP Robert Jordan).

I like to think of Jordan Rivet as the cooler, sexier version of myself. She works harder, writes faster, is better at writing dialogue, and takes more risks than the more introspective Shannon Young.

You expats will likely recognize this split-personality complex. You probably feel like a different version of yourself depending on which country you are in at any given time. And you know what it’s like to resume an old role when you return to your home country for a visit and pick up right where you left off as soon as the holiday ends.

Surprisingly, it’s possible to do this as a writer as well.

Diary, as you may have gleaned from my previous entries, there’s a further way Shannon Young and Jordan Rivet differ: in their publishing paths. I’ve only ever queried agents and publishers and signed traditional book deals as Shannon Young. It’s very much a hybrid name and includes some small press titles, an audiobook deal, a Kindle Single, and some self-published work. As Shannon Young, I’ve been able to speak at the Hong Kong International Literary Festival and present the traditionally published “stamp of legitimacy” that some outlets still require.

But Jordan Rivet is an indie name all the way. I’ve never submitted a Jordan Rivet story to an agent. I publish the books when they are edited and ready, not when someone tells me I can. It has been incredibly empowering to take this path, and it has prompted me to improve my writing and to pay more attention to the market.

And you know something, Diary, I have a good feeling about Duel of Fire, a book that wouldn’t exist yet if I were still waiting for the Seabound series to make its way through the traditional pipeline.

Obviously, different methods are right for different books and different types of writers. But indie publishing has allowed me to take my work to the next level, and I can’t wait to see the outcome of the launch that began this past weekend. Don’t forget to pick up your discounted copy pronto!

So, Diary, that is the story of why I write under two different names. When people ask me what I write in real life, small talk gets a bit complicated—a bit like when a Third Culture Kid being asked where they’re from! (My author pages on Amazon make a lot more sense!)

p.s. to Diary Readers: Do you have experiences you can share where you’ve adopted different personas in different situations? Do these personas come with different names too?

To answer your question, Shannon, I definitely think we expats and former expats are candidates for multiple names. We’re after all the kind of people who like to live out our fantasies, and some of us even write about them. Thanks for being one of them, Jordan! 🙂 ~ML

Photo credits: Photos of Shannon and her books were supplied.

One response to “DIARY OF AN EXPAT WRITER: A tale of two names, Shannon Young (expat writer) and Jordan Rivet (hipster expat writer)”