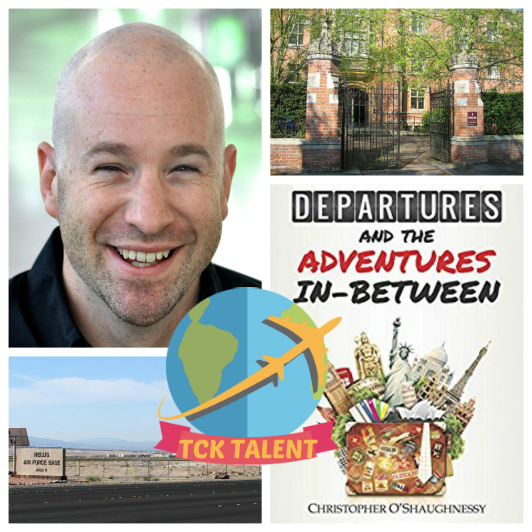 Columnist Dounia Bertuccelli is here again, in the company of another gifted Adult Third Culture Kid.

Hello again, readers! Today’s interviewee is the extraordinary Christopher O’Shaughnessy. A talented author, speaker and TCK advocate, he is passionate about what he does and also happens to be hilarious. As Lisa Ferland, editor of the Knocked Up Abroad series (see top 60 nonfiction expat books of 2016), tells it, Chris’s opening keynote speech at the Families in Global Transition conference in 2016 made a lasting impression “because he made me laugh so hard that I cried.”

Chris is a military brat. He was born in England to American parents, both of whom grew up as Third Culture Kids (his father was born in Germany and raised in France, while his mother spent most of her life in the UK). Following in the family tradition, he spent much of his childhood backing and forthing across the Atlantic as his family moved to bases in Florida and Nevada as well as to multiple US bases within the UK.

After graduating high school in the UK, Chris spent three years traveling between the United States, Germany, and Italy before returning to England to study at Ridley Hall, a theological college in Cambridge, for a degree in Youth, Community Work and Applied Theology, validated by Oxford Brookes University.

After college, Chris moved to Turkey “and then kept on gallivanting”: he can now boast of living and working across the globe and of having ventured to more than a hundred countries. (Right now he lives in Waterloo, Belgium.)

Meanwhile, his passion for nurturing youth and community has only deepened. After a career as a community director in the UK and the Middle East, and then eight years in a military chaplaincy, he became what he is today: a full-time speaker and writer sharing messages of empathy and hope with fellow Third Culture Kids, often through the use of self-deprecating humor. Particularly entertaining are his “lost in America” stories.

Chris’s first major written work is the book Arrivals, Departures and the Adventures In-Between, published by Summertime in 2014. Containing many examples from his own life, it has garnered high praise from the global community.

Welcome, Chris, to the Displaced Nation. Did growing up as a TCK influence your decision to become a writer and speaker?
Absolutely! In hindsight, a big part of the reason I chose to work with youth and communities was the desire to help people in transition. I didn’t learn the term “TCK” until my final years at university and was so thrilled knowing there was a concept which explained my experiences, that I wrote my final dissertation on TCKs. I’m a firm believer in the power of moving something from intuition to intellect. Learning I was a TCK shifted something I felt to something I could intellectually engage with, learn more about, and use as a framework to examine my life. Over the years I watched many of my peers who also grew up in transition face challenges without the benefit of realizing the strengths their upbringing had bestowed. That’s what inspired me to become a speaker and writer—I wanted “my people” to make the most of their experiences and appreciate their own unique stories. I wanted to help others process intellectually what they felt intuitively, just as I had done. That and my love of speaking into microphones.

In both your writing and speaking you’re able to touch your audience, make them laugh and think, weaving humor, empathy and hope throughout. Have you always had this ease and voice, or is this something you cultivated?
I’ve always had a love for telling stories—I find the human capacity to be moved by and immersed in story to be incredible and beautiful—and for trying to make people laugh. Laughter can be disarming because it’s genuine: it’s a physical outburst we’re relatively comfortable experiencing in a group. Comedy can be a fantastic teaching tool as we tend to remember things that have made us laugh really hard. So the desire to tell stories and make people laugh is probably in my nature, while developing the voice to do so has taken some effort. That said, I’m fortunate in that working with youth has afforded plenty of opportunities to practice and refine my public speaking skills. Kids are very honest critics! 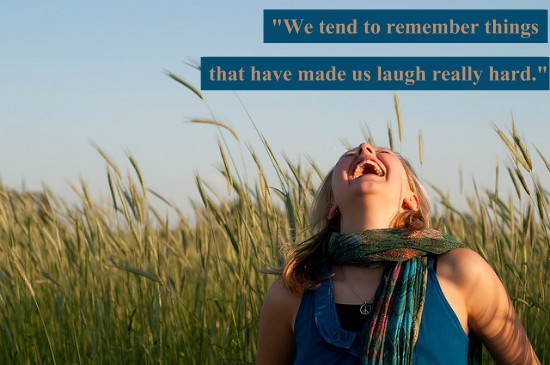 What led you to write your book, Arrivals, Departures, and the Adventures In-Between?
I have been thrilled to see the number of books about TCKs grow over the years, many of which have been helpful for me in processing my own experiences. But while I would draw on this growing body of work in my presentations to students, parents, and school faculty, I found I wanted to leave my audiences with something more than I could possibly cover in that kind of format. So I decided to write my own book in a style that would hopefully entertain while educating and helping others process intellectually what they were going through intuitively.

How long did it take you to produce the book, and what did the process involve?
Admittedly it was a few years between deciding I needed to write a book and actually doing so. In fact, it took a friend calling me to task at a pub one evening and saying, “So, this book you’ve been planning on writing: are you ever going to actually do it?” My friend took it upon herself to hold me to deadlines; as a result, I had my first manuscript in about six months. (To be fair, I’d been thinking about things for so long, it was really just a matter of sitting down to record the concepts and stories in written form.) After I got together with Summertime Publishing, it took at least another six months to finalize the book working with Summertime’s editors and designers. Conveying stories and concepts in written form is a bit different than doing so verbally. I can be far more dynamic when presenting something live, and adapt to the audience as need be. Writing is static; it’s a different kind of discipline.

Are you working on anything else at the moment?
Actually I am in the preliminary stages of producing another book! I have been devoted a lot of my work to the concepts of hope, empathy, community, and connection in our ever-globalizing world. I firmly believe that the experiences TCKs and CCKs (cross-cultural kids) have had with multiple transitions and developing a global perspective carries wider lessons for what the world needs in order to thrive in a new era of technological connectedness and cross-cultural reality. I’m working on a book exploring these concepts—along with the need to go beyond mere tolerance toward something closer to healthy connection and community. 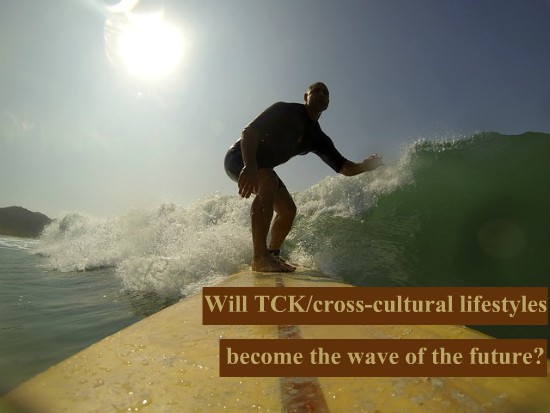 Do you have tips for other globally mobile individuals looking to publish a book or become speakers?
I’m sure it’s been said before…but get out there and do it! Writing and speaking are both skills that really require feedback and interaction to hone. Any opportunity to speak or write is a helpful one. No matter how small the audience, it builds experience and invites feedback. It requires vulnerability, and things don’t always go as planned. But isn’t that the very basis of a story? If it all goes smoothly it’s not very interesting! If we demand struggle and growth and mystery and reflection from stories to hold our attention, shouldn’t we expect the same from life?

I can see why people find your words inspirational! Finally, could you please share any other information or links you would like our readers to know about.
I am really excited about the What Expats Can Do project, put together by Cristina Balden and Claudia Landini of ExpatClic. It is an ingenious way to connect action with the concept of increasing empathy and bringing hope. They used some of the concepts I’d spoken about during my keynote speech at the 2016 FIGT conference (it wasn’t just belly laughs!) and took them so much further. There are challenges to participate in and stories to read—definitely worth checking out. Speaking of FIGT, I’m also a huge fan of Families in Global Transition. It’s got a wealth of resources and connections and hosts an annual conference where you can meet and interact with leaders, innovators, thinkers, and practitioners all focusing on the world of the globally mobile and cross-cultural. It’s inspiring and energizing! Last but not least, I frequently visit the following websites/magazines for inspiration and insight into our field:

Thank you so much, Chris! We appreciate all the great resources (and of course the shout-out!).

Readers, please leave questions or comments for Chris below. Check out his website and connect with him on social media (Facebook, Instagram, and Twitter), because as Chris says, “I really do love connecting with people and exchanging stories and adventures!” And don’t forget about his book: you can preview three of the chapters here.

Born in Nicosia, Cyprus, to Lebanese parents, Dounia Bertuccelli has lived in France, UK, Australia, Philippines, Mexico, and the USA—but never in Lebanon. She writes about her experiences growing up as a TCK and adjusting as an adult TCK on her blog Next Stop, which is a collection of prose, poetry and photography. She also serves as the managing editor of The Black Expat; Expat Resource Manager for Global Living Magazine; and is a freelance writer and editor. Currently based on the East Coast of the United States, she is happily married to a fellow TCK who shares her love for travel, music and good food. To learn more about Dounia, please read her interview with former TCK Talent columnist Lisa Liang. You can also follow her on Twitter.