TCK TALENT: Journalist Alison Cavatore has crafted lifestyle magazine for those who consider the world their home

Leave a comment Posted by The Displaced Nation Team on April 1, 2017

Columnist Dounia Bertuccelli is back with another super-talented Adult Third Culture Kid guest.

Hello, readers, and welcome to this month’s interview with Alison Cavatore—founder and editorial director of Global Living Magazine, a lifestyle publication for expats worldwide. It features exclusive content for expats by expats, including articles on living and working abroad, expatriation and repatriation, Third Culture Kids, culture shock and adaptation, international business, world-class cities, travel, and more.

Born in Pittsburgh, Pennsylvania, to an American mother and a Spanish father, Alison is an ATCK who grew up in the United States, Holland and France. As an adult, she has lived in Canada, Switzerland and the United States. Currently she is based in Arizona with her French/German husband and their six-month-old baby girl. Even though Alison hasn’t been an expat for several years, she still feels very connected with that life and looks forward to the day when she and her young family cross borders again to travel and live.

Fun fact: Alison and I graduated together at the American School of Paris, and serendipity reconnected us through expat/TCK communities over ten years later! We are living proof of the value of such communities.

Welcome, Alison, to the Displaced Nation. Due to your father’s job, you grew up largely in Europe, and now you’ve repatriated to the United States. Let’s start by talking about your travels as a young adult. How did you end up in Canada after Europe?
I went to McGill University in Montreal, Canada, for my undergraduate education, where I studied psychology and sociology. I chose McGill because it’s a great school and I loved the city of Montreal—it was the perfect mix of North America and Europe, something I really appreciate even to this day because of my background. Having just lived in France, I found it a good middle step to getting back to the United States (I eventually ended up in Miami). The university is also extremely international, which suited me well having attended international schools for most of my life.

And then you went to Switzerland?
After finishing McGill in 2007, I took a year off and then attended Webster University in Geneva, Switzerland, for a master’s degree in counseling. While there I got involved in magazines, interning at Swiss Style magazine, which caters to expats within Switzerland, and decided I wanted to switch my graduate studies to journalism. That’s how I ended up back in the United States: I headed to the University of Miami (Florida) for a master’s in journalism, which I completed in 2011.

Starting up Global Living Magazine is a huge achievement. What gave you the idea in the first place?
While studying at the University of Miami I was involved in numerous publications and decided I wanted to work in magazines and focus on content I was passionate about: living abroad and the expatriate lifestyle. I created the prototype for Global Living Magazine for my master’s thesis; a month after graduating I founded Global Living and began working on the first issue, published in May 2012. I wanted to start my own publication so I could shape the narrative and focus on topics I see as important for the expat community as a whole, whether you’re an expat in Dubai, Chicago, Kenya or Australia. There is no other publication dedicated to expats worldwide like Global Living Magazine.

It sounds like your TCK upbringing played a big role in creating GLM.
Definitely. Having lived abroad for so much of my life, I was back in the United States and feeling a bit like an outsider in my own country. When I was thinking about starting my own publication, I wanted to make sure I was publishing content that could be useful to those who shared some of these feelings, who, like me, are so strongly connected to the expat community that they would appreciate and benefit from having a new resource.

Nearly five years have passed since the magazine’s launch. How has it evolved?
The magazine has evolved in many ways, both creatively and in terms of content. When I started Global Living I had a strong expat focus but also incorporated a lot of travel articles into the publication. I subsequently cut down on the travel component as I watched the positive response to the expat component grow and take on a life of its own.

As we TCKs know, global living can be glamorous, but it can also make you feel displaced. Does the magazine reflect these two sides of the coin?
Global Living presents a realistic perspective on international living: we present the good, bad and ugly aspects of expat life. While one person’s experience in one country may have been extremely positive, I think it’s also important to share a less positive experience because it’s reality—some assignments go well, some don’t. There are so many different aspects to expat life and Global Living touches on as many as possible in each issue so there is always something for everyone.

Print magazines are having a tough time these days.
Yes, when it started, Global Living was exclusively available in print-on-demand editions through MagCloud; but it can now be read (for free) in the Global Living app. Taking this step to make GLM more accessible worldwide has significantly grown our audience and made it more appealing to expats who are often on the go and can access all our issues on their smartphones or tablets.

Has GLM helped you process your upbringing?
Watching the expat community embrace Global Living has helped me accept my TCK upbringing as something positive. It has given me a foundation I didn’t always feel I had growing up. The magazine has also been an amazing way for me to stay connected and in tune with what is going on in the expat community. The people I have met and worked with through the publication have shaped it (and me) in ways I couldn’t even imagine when I first started. Expats are, in general, a fearless, adaptive, open-minded, accepting, forward-thinking group of people and that has ultimately been my motivation every time I put together a new issue. The response to Global Living has been so inspiring and rewarding as I hear from expats that it has been a wonderful addition to their life, making them feel less alone.

You’re currently based in Arizona, but before you were in DC and Miami. Do you see yourself going abroad again and resuming the expat lifestyle?
My husband is now the expat in the family, as a French/German living in the US. We moved to Arizona based on his job, which could subsequently move us pretty much anywhere in the world. We’d love to have our daughter, Victoria, experience expat life. Most of our immediate family lives outside the United States. I’m sure they would love to be closer to her at some point, too, if that happens.

Ultimately, do you think you might settle somewhere or will you always get “itchy feet”?
Ideally, I’d like to establish a “home base” somewhere in the US to which we could always return—preferably in Washington, DC, which I personally associate the most with “home.” I definitely still get itchy feet when we’re in one place for too long, though, a common TCK and expat experience. When we’re in the States we miss things about Europe and when we’re in Europe we miss things about the US. 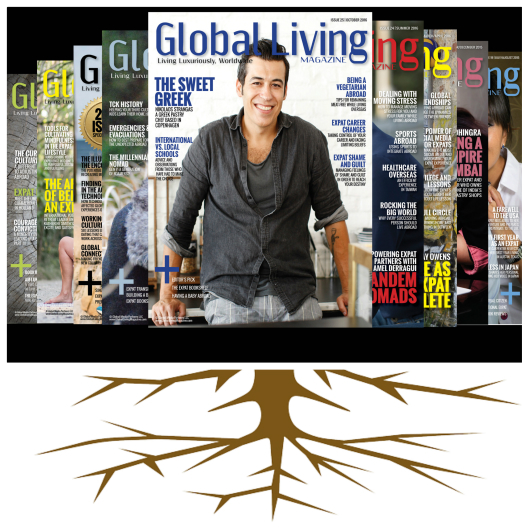 “I want GLM readers to feel connected and ‘rooted’ in a global community,” Cavatore says.

Lastly, what are your hopes and future plans for GLM?
I want, and have always wanted, Global Living Magazine to be more than just a form of entertainment for readers—I hope it can be a resource and guide to the expat life. It can be a disorienting life to have many homes and the purpose of Global Living is, in part, to provide a sense of community and identity for those who struggle to find one while immersed in countries away from their “home”. I want people to read through the pages of Global Living and say, “Oh, I know exactly how he/she feels” or “That’s an interesting way to look at that experience” and feel connected and “rooted” in a global community. As far as the future goes: Global Living will continue to explore the latest issues that arise within the expat community and to invite new writers to provide fresh perspectives. Expat experiences vary so vastly, it’s important to include as many perspectives as possible to present a realistic view of living abroad, and repatriating.

Thank you so much, Alison!

Readers, please leave questions or comments for Alison below. Also be sure to check out Global Living Magazine, which is published every quarter (October, January, April and July). Current and past issues are available for free in the Global Living app. At GLM online, you can read magazine content, extra articles and the popular My Expat Story section. And of course you can follow the magazine on Facebook, Twitter, Pinterest and Instagram.

Born in Nicosia, Cyprus, to Lebanese parents, Dounia Bertuccelli has lived in France, UK, Australia, Philippines, Mexico, and the USA—but never in Lebanon. She writes about her experiences growing up as a TCK and adjusting as an adult TCK on her blog Next Stop, which is a collection of prose, poetry and photography. She also serves as the managing editor of The Black Expat; Expat Resource Manager for Global Living Magazine; co-host of the monthly twitter chat #TCKchat; and TCKchat columnist for Among Worlds magazine. Currently based on the East Coast of the United States, she is happily married to a fellow TCK who shares her love for travel, music and good food. To learn more about Dounia, please read her interview with former TCK Talent columnist Lisa Liang. You can also follow her on Twitter.

Photo credits:
Interviewee photo and magazine covers were supplied. Photos of Geneva, Paris & Montreal, and the vector of roots are from Pixabay.  Photo of Miami: “South Beach The Carlyle dusk,” by Dan Lundberg via Flickr (CC BY-SA 2.0).