3 Comments Posted by The Displaced Nation Team on February 27, 2016

Columnist Elizabeth (Lisa) Liang has invited another fellow Writing out of Limbo contributor to be her guest this month.

Nancy was born in Tacoma, Washington, to Congregational missionaries. Not long after, the family moved to Portugal to learn Portuguese in preparation for a life in Angola, then a Portuguese colony.

Nancy grew up mostly in Angola—except for a couple of years in Rhodesia (now Zimbabwe), where she boarded in a dorm run by an English couple, 2,000 kilometers away from her family. The Angolan war for independence from Portugal, in 1961, forced Nancy’s mother to bring her children “back” to Tacoma when Nancy was 16.

After high school graduation Nancy attended Carleton College, and then she and her husband settled in Durham, NC, where she worked as a librarian for 30 years.

The author of an acclaimed Third Culture Kid memoir At Home Abroad: An American Girl in Africa, about her childhood in Africa, Nancy has received honors from the Southern Women Writers Conference and the North Carolina Writers’ Network.

Welcome, Nancy. I’ve outlined some of your story already because I’d like to begin at the point where, after having “repatriated” with your mother and siblings to Tacoma, Washington, you were basically left on your own. Your older sister went to college and your mother took your younger siblings back to Angola to be reunited with your father. You, meanwhile, attended a high school in Tacoma for your senior year, living with a family you knew from church. In both your memoir and essay in the anthology Writing Out of Limbo, you write eloquently about the yearning you felt for family connection and “home,” which you sometimes confused with a need for spiritual connection. How do you define “home” now?
Thank you for inviting me, Lisa. The advantage of aging is the ability to look back and see how seemingly random decisions have knit into a coherent pattern. It is obvious to me now that a drive to create family and community has led me through life. Most recently it has manifested in the decision my husband and I made to form and move into a cohousing community in downtown Durham, North Carolina, called Durham Central Park Cohousing Community. Cohousing offers some of the best aspects of growing up as a missionary kid, such as sharing resources, supporting fellow community members, and working together toward a shared vision. Our urban condo community sometimes reminds me of the good times I had living in dorms. Of all my living situations growing up, dorms were the most congenial. Now the coho feels very much like home.

Were you happiest in a certain place at a certain time, and if so, why?
Zeroing in on one place and time is a challenge for me. With the exception of the years immediately after reentry to the United States when I was caught up in culture shock, almost every place I’ve lived has had its happy times. For pure unconscious happiness, my early years in Lobito, living with my family, swimming on the beach across from the house every day, and absorbing the cultural mix of the small city has to qualify. My children’s growing up years gave me the satisfaction of family. And now in my older years, settled into cohousing, I find the challenge of working with 38 other residents draws on my strengths and tests me in ways that help me grow.

“I had landed in the middle of my own mystery…

Do you identify most with a particular culture or cultures, or with people who have similar interests and perhaps similar cross-cultural backgrounds?
My antenna immediately goes up when I hear someone talking about living in another country, whether as a child or adult. I attribute all sorts of wonderful characteristics to her, not always with good reason! I’ve spent decades reconciling to American culture and I am most of the way there. I married an American man who had not traveled much until I showed him its virtues. I have two American sons who have absorbed the best of American culture, contribute to it in the fields of affordable housing and community organizing, and bring me great happiness. That said, I pay special attention to what is happening in Angola and Portugal. I try to keep up my Portuguese and recently have had wonderful contacts via Facebook with young Angolans. I attend reunions of those who also grew up in Angola, at times the only way to know what is happening there since newspapers rarely cover Angola.

Did your TCK upbringing inform your choice to become a writer and memoirist?  Conversely, did writing the memoir and the essay for Writing Out of Limbo help you to process your TCK upbringing?
Both are true. Reading Mary Wertsch’s Military Brats in my 40s launched me on a mission, so to speak, to explore how a missionary upbringing affected missionary kids, or MKs, in the way that the military affected military brats. I found countless correspondences. The responses to the questionnaire I sent out—which were compiled in Africa Lives in My Soul: Responses to an African Childhood —provided rich sources for contemplating my life. The honesty and willingness of other missionary kids to respond affected me deeply and brought back memories of similar experiences I had had. Writing a memoir seemed like the logical next step. Faith Eidse helped me along the way by including my essay in Unrooted Childhoods, the memoir anthology she and Nina Sichel edited. Her confidence in my work was invaluable. 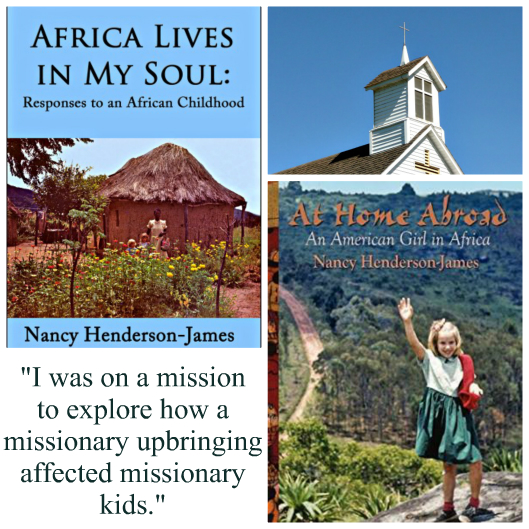 …the mystery of life, really.”

It sounds like writing became part of the fabric of your life.
Writing continues to supply food for inquiry and expression. Our cohousing community has a small group of writers and artists that meets weekly to create and share. The group motivates me to write and provides helpful feedback. I also co-edit our monthly e-news.

What made you decide to settle in Durham and become a librarian?
We moved to Durham when my husband decided to attend Duke University’s graduate health administration program in 1974. As the wage earner with a newly minted library degree, I found a job working as a high school librarian—strange since I had hated attending American high school. Despite that, I worked at Jordan High School for 25 years and then for another five years at the UNC Children’s Hospital School (for children with chronic illnesses), as their first librarian.

Were you an avid reader as a kid, like so many TCKs?
As a child I was much more attracted to the outdoors (riding my bike, running, swimming) than reading inside. But when I graduated from high school I realized how much I didn’t know and started reading.

As an ATCK, do you have “itchy feet,” which still make you want to move frequently?
ATCKs seem to respond in two opposite fashions…to want to move frequently or to stay put. I discovered early on that I am in the second camp. I was a thrilled high school senior when President Kennedy announced the Peace Corps, certain I would join after college. But when the time came, I chose graduate school stateside to maintain ties with my boyfriend and his family, since my family still lived in Angola. The need for connection trumped the need for adventure. I have never lived outside the United States since leaving Africa in 1961. That said, I do travel for pleasure and took my sons on trips abroad, including on my first return trip to Angola after 44 years.

Your memoir, At Home Abroad: An American Girl in Africa, was well received. The chapter included in Unrooted Childhoods is gorgeous and haunting, and I love how you talk about the importance of language. (I agree! I think the ability to communicate trumps nationality, race, gender, religion, etc., in terms of person-to-person contact.) Where else may readers find your wonderful published writing?
My recent publications have been essays:

I’m currently working on another memoir that focuses on the many mothers and fathers who passed through my life growing up.

Thank you for sharing your story with us, Nancy! Readers: you may learn more about Nancy Henderson-James and her writings at her author site. And don’t forget to check out her books: At Home Abroad and the anthology, Africa Lives in My Soul. If you have any questions or comments for Nancy, be sure to leave them below.

Editor’s note: All photos of Africa are from Nancy Henderson-James’s Flickr albums; other photos (of the Tacoma school and the library) are from morguefiles. The quotes are from Nancy’s memoir (see excerpts).

Elizabeth (Lisa) Liang is a prime example of what she writes about in this column: an Adult Third Culture Kid working in a creative field. A Guatemalan-American of Chinese-Spanish-Irish-French-German-English descent, she is an actor, writer, and producer who created the solo show Alien Citizen: an earth odyssey, which has been touring internationally. And now she is working on another show, which we hope to hear more about soon! To keep up with Lisa’s progress in between her columns, be sure to visit her blog, Suitcasefactory. You can also follow her on Twitter and on Facebook.