Leave a comment Posted by The Displaced Nation Team on December 16, 2015

In a year that took her to Spain and South Africa for performances of her play Alien Citizen, columnist Lisa Liang is already making big plans for 2016. You go girl!

Hello, dear readers. This month’s column is devoted to my recent experience filming my one-woman show, Alien Citizen: an earth odyssey, in Los Angeles, California. The show is about growing up a TCK of mixed heritage.

Two years ago, I had Alien Citizen video-recorded so that I could

I had no budget and will be forever grateful to my friend, filmmaker Rod Bradley, for giving the video such high-caliber image quality. For readers who may be unfamiliar with my show, here is what we produced:

Taking it up a level

I want a lot. I’m not sure how to pursue any of it. But I will try.

This all means that I need a filmed version that looks and sounds really good. So I took my ridiculously meager budget (at least I had a budget this time!) and rented a venue where years ago I was in the audience for the greatest live performance of a solo show I’ve ever seen.

Last month, at this tiny theatre, I produced as professional a film shoot as I could under the ultra-low-budget circumstances. We shot over two nights with two extremely high-end digital cameras on both nights—I got great deals on the cameras and equipment, largely thanks to my friend Rod again. I hired a DP (director of photography), a camera operator, and a professional sound recordist (who set up five microphones, including the lavalier attached to my sternum, for truly good sound quality).

My husband, Dan, ran the projections and sound cues, and I hired a stage manager to also hang lights, program the light board, and run lights.

My director, Sofie Calderon, worked tirelessly with the crew and me, having to “slate” the clapboard herself because we had no PA (production assistant) to do the job for her. She was wonderful.

Director Sophie Calderon puts her all into helping Lisa Liang with the filming of Alien Citizen in November (photos supplied).

This is what I’ll say about performing a solo show for cameras but without an audience, starting and stopping for technical and performance adjustments: it’s utterly exhausting. We were at the venue for a good eight hours that night and we must have shot for at least four-and-a-half of those hours. This meant that I had to perform alone for close to five hours. No costar to work off of, no audience to bounce off of, nobody but the silent cameras, the silent crew, and me. Mind you, doing the 80-minute show nonstop is already a tremendous workout. I always say it’s like doing a sprint triathlon while emoting—and I would know because I’ve done a sprint tri. So now imagine doing it for 270 minutes.

The next night’s shoot was much more fun, thanks to the warm, enthusiastic audience. They were mostly friends and friends-of-friends who were happy to be there, which made all the difference. I enjoyed myself and the performance felt “full.” We had to “hold” a few times due to sirens passing just outside the theatre—the bane of filming in a big city. But the audience was good humored and supportive throughout.

Afterward we had a Q&A moderated by one of my associate producers, Karen Smith, and people asked smart questions. I’ll include the Q&A on the DVD as an “extra” and maybe put it on YouTube as a promo. People stuck around for wine and goodies after that, and it was absolutely lovely to continue receiving support and enthusiasm well into the evening. 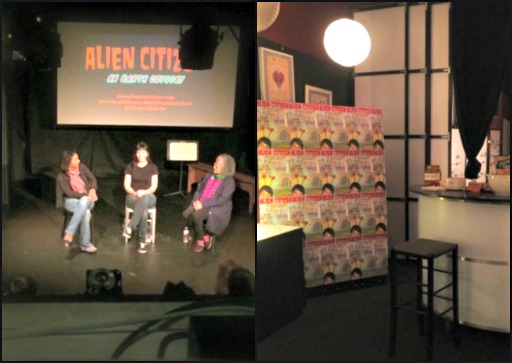 Associate producer Karen Smith conducts a talk back with Lisa and Sophie for a DVD “extra”; the lobby is decked out before the public show with an Alien Citizen backdrop for interviews later (photos supplied).

Have I mentioned that I performed with four injuries? I accidentally hurt my lower back in January, and the problem has flared up intermittently throughout the year. My left shoulder/neck area started bothering me over the summer. My right clavicle was injured accidentally at a chiropractic session for the first two injuries (!). And I hurt my right leg during a performance of an excerpt of the show in September. I’ve been doing all I can to take care of these problems: chiropractor, massage, acupuncture, cupping, at-home physical therapy, hot tub, you name it.

Stress with a capital “S”

So I can only think that the reason they all flared up (especially my back) with a vengeance in the weeks leading up to the shoot was: stress. It’s stressful to produce a film, even when it only shoots over two nights. If you’re the only actor in it, and it’s your “baby,” and you’re literally recording it for posterity, then the stress increases exponentially. So I felt more wrecked than usual on the mornings after both performances, and I laid low for a few days afterward. Luckily, Thanksgiving was soon upon us, so I used the holiday weekend as an excuse to stay in.

I look forward to editing the digital version of the show with my director’s input, and then sending it out into the world. The world has been very kind to Alien Citizen so far, so I’m allowing myself to hope for its future.

Meanwhile, my next live performance will be at Smith College on January 30, and my Asia-Pacific debut will be in Singapore in late April. The show still has legs and I’m so grateful to every single person who has supported it.

Since I’ve posted several entries about the show’s adventures in 2015, and you’ve been very indulgent of that, I’m pleased to announce that the first TCK Talent posting of the new year will be an interview of a wildly impressive creative ATCK. Happy holidays, all, and stay tuned!

Thank you, Lisa! It’s been quite a year for you and your solo show. I’m amazed you still had energy for a film shoot, especially given your injuries. You’re amazing! I think I speak for all the Displaced Nation readers in wishing the brightest of futures for Alien Citizen, in 2016…and beyond! —ML Awanohara