CULTURE SHOCK TOOLBOX: Newbie expats, to keep waves of culture shock from crashing over you, practice the art of tacking

3 Comments Posted by The Displaced Nation Team on November 14, 2015 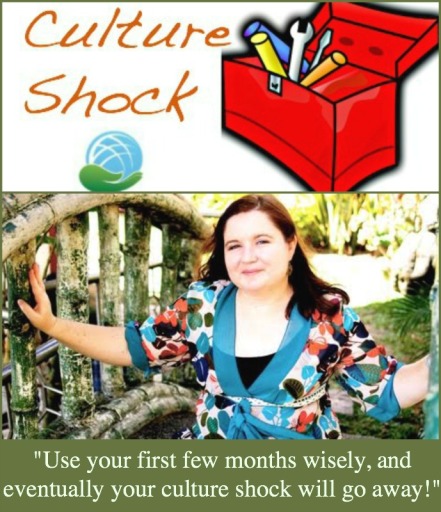 Beth Green at a Buddhist temple in Cebu City in the Philippines, during Chinese New Year (supplied).

Transitions enthusiast H.E. Rybol is back with her latest interview guest.

Ahoy, Displaced Nationers! This month, fellow Displaced Nation columnist Beth Green takes us on a brief tour of her extensive, initially aquatic travels. You know how children test the waters? Well, Beth got to do that quite literally. That’s right, Beth spent her childhood on a sailboat! Doesn’t that sound mouth-watering? Though I must admit that with my predisposition for motion sickness I’d probably spend most of the time with my head over the railing.

Anyhoo, Beth now lives on land—in Prague, the Czech Republic—where she works as a freelance writer and English-language coach. She is also a member of the Sisters in Crime mystery writers’ association. Upon discovering she is a traveler, bookworm and lover of spookiness, I knew I had to interview Beth for this column! And luckily for us, she kindly agreed to share her culture shock stories.

Join us as we talk about opening a conversation with an apology, cringing at our own meltdowns, sending stuff back in restaurants (or not!), and working weekends to make up for weekday public holidays (say what?!). You never know, you may pick up a few items for your culture shock toolbox!

Hi, Beth. Welcome to my column! As a TCK and an ATCK, you’ve led a peripatetic life. Tell us a little about where you’ve lived…

I’ve never lived anywhere for very long! As a kid, I traveled with my parents on a sailboat. We were in the Caribbean for seven years and the South Pacific for two, with stops along the coastal United States in between. I went to high school in Alaska and to university in the continental USA, but my junior year of university I went to Spain on exchange for a year. That experience inspired me to move to Europe when I graduated and work for a bit. I lived in the Czech Republic for three years, where I met my now-husband (who’s Australian…of course!). Then, we moved to China together to teach English. We were there for four-and-a-half years all together—but with a break in the middle when we did a long backpacking tour of Southeast Asia and India that included living on an island in Thailand for five months. After touching down briefly in the Philippines and Thailand again, we’ve been back in the Czech Republic for the past two years.

In the course of these many transitions, have you ever ended up with your foot in your mouth?

Oh, sure! The first time I moved to the Czech Republic I quickly realized I needed to start every conversation in Czech with an apology. That way I could make up for the inevitable times when I forgot to whom I should give kisses on the cheek rather than shake hands, or failed to greet everyone properly (as is customary in many more situations in Central Europe than in other cultures—you say “hello” and “goodbye” even to strangers in elevators). China as well was a tricky place to stay on the right side of etiquette. Speaking of which, I can recall an embarrassing meltdown I had once in China after being served a mango-papaya smoothie (what I had actually ordered, I realized later) rather than a melon smoothie like I thought I was getting. I lost all kinds of “face” that day.

How should you have handled that situation? What if any tools have you developed to adapt to this kind of scenario?

What I should have done—and what I learned to do later when I inevitably ordered the wrong thing due to either fanciful names on the menu or my ham-tongued attempts to speak and understand Mandarin—was just to give my smoothie to someone else and order another one. In certain cultures, you just can’t send stuff back in a restaurant! In other words, I had to get better at tacking: that’s when you zigzag back and forth with your sailboat instead of sailing right into the wind. I had to reminding myself constantly that expect the unexpected and not to make too many waves. Like the time in China when I was told that we would all work on Saturday to make up for a public holiday on Monday. What? That’s considered normal? Well, this will be a fun story later! And, I’d better make a note to check my next contract veeerrry thoroughly!

Can you think of a situation you handled with finesse, and why do you think that was?

I feel like my latest move, back to Europe from Asia, went well because I made a decision not to hard on myself when the waters got choppy. I also decided to take measures right away that past experience had taught would help lower my stress; for instance:

Of course, I’m lucky that I had the option to do all of those things—not everyone will when they move cultures.

If you had any advice for someone moving abroad for the first time, what tool would you suggest they develop first and why?

This advice is easy to give and hard to follow: develop patience and also trust in yourself: you will make progress eventually. Patience for yourself for not “catching on” quickly to situations (I find that culture shock seems to lower your IQ a bit at first!), patience for local people who might not understand your expectations (even though they’re crystal clear to you), patience for the culture shock itself. If we go back to our sailing metaphor: By tacking, you move into the wind gradually. But the zigzagging doesn’t necessarily slow you down. You can learn to tack efficiently—that’s what I tried to do when seeking help for some of the more stressful challenges of settling back into life in Prague. Use your first few months wisely, and eventually your culture shock will go away! Tacking is the Blu-Tack of the culture shock toolkit. 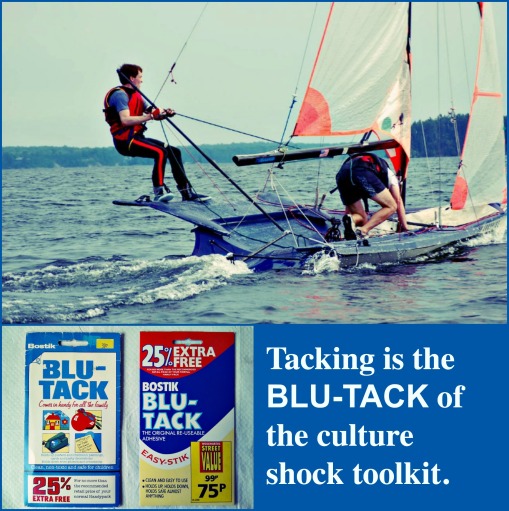 Thank you so much, Beth, for sharing your experience with us! Like you said, if you develop the sailor’s tacking skill, soon it’ll all be water under the bridge. Plus, as you also pointed out, you’ll have great travel yarns to share! In the end, it’s the situations that are most difficult to navigate that make for the best lessons, right?! That’s what I love about culture shock: the lessons we learn and the way our horizons shift as a result.

Readers, what do you make of Beth’s advice? If you like what she has to say, I recommend you visit her Booklust, Wanderlust book review column here on the Displaced Nation, as well as her personal site. And as those who frequent her column know, she’s a social media nut: find her on Facebook and Twitter.

H.E. Rybol is a TCK and the author of Culture Shock: A Practical Guide and Culture Shock Toolbox. She loves animals, piano, yoga and being outdoors. You can find her on Twitter, Linkedin and Goodreads. She recently launched a new Web site and is now working on her second book.

3 responses to “CULTURE SHOCK TOOLBOX: Newbie expats, to keep waves of culture shock from crashing over you, practice the art of tacking”