Leave a comment Posted by ML Awanohara on December 25, 2012 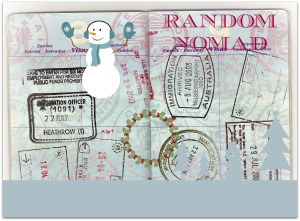 It’s Christmas Day and the holiday party continues for the expats and other global voyagers who washed up on the Displaced Nation’s shores in 2012. Remember all those Random Nomads who proposed to make us exotic meals based on their far-ranging meanderings? Not to mention their suitcases full of treasures they’d collected and their vocabularies full of strange words… How are they doing these days, and do they have any exciting plans for the holidays? Third in a three-part series (see also Part One and Part Two).

During the final third of 2012, we met some expats and intrepid world travelers who, I think it’s fair to say, have developed some rather unusual hobbies and eating habits. The two are one and the same in the case of Brian MacDuckston, who was featured on our site this past August. He has made a habit of eating ramen in as many Tokyo venues as possible — a hobby that was quirky enough to attract the attention of the New York Times. In addition to Brian — a San Franciscan who originally went to Japan to teach English — we encountered:

Three of this esteemed group are with us today. What have they been up to since a few months ago, and are they cooking up anything special for the holidays, besides chatting with us?

Have there been any big changes in your life since we last spoke?
I’ve been offered a few gigs on Japanese TV shows as a “ramen reporter” and successfully pitched my first magazine article about a best-of-ramen list. A start! I also started a ramen class aimed at non-Japanese speakers. Check it out!

How will you be spending the holidays this year?
A nice staycation in Tokyo.

What’s the thing you most look forward to eating, dare I ask?
I’m trying to eat more high-class sushi, but I’ll probably just stick to a lot of ramen for the next few weeks.

Can you recommend any books or films you came across in 2012 that speak to the displaced life?
I really enjoyed Jiro Dreams of Sushi, a documentary about the most revered sushi chef in the world. [Editor’s note: The film has been available on Netflix since last August.]

Do you have any New Year’s resolutions for 2013?
I want to train myself to stop using double spaces after periods when I write. Not a big goal, but important for someone who has an interest in being paid for my writing.

A worthy goal, imho! (I’ve had to correct quite a few in my time…) So, any upcoming travel plans?
My father will visit Japan, so I am planning a luxury week-long trip of eating and relaxing in hot springs. Two things I’m good at!

Any big developments in your life since we last spoke?
My second Cherry Tucker Mystery, Still Life in Brunswick Stew, has a release date of May 21, 2013. [Editor’s note: As mentioned in Larissa’s interview, the first in her Cherry Tucker series, Portrait of a Dead Guy, came out this year.]

How will you be spending the holidays this year?
We travel to visit my family in Illinois and St. Louis after Christmas through New Year’s.

What’s the thing you most look forward to eating?
There’s this Italian grocery, Viviano’s, in the Italian district of St. Louis, called The Hill in St. Louis, that I really look forward to visiting. I’ll stock up on cheap wine and Italian staples for the coming year.

Can you recommend any books or films you came across in 2012 that speak to the displaced life?
Yes, two Japanese films:

Have you made any New Year’s resolutions for 2013?
To spend less time on social media and more time writing. I love chatting online, but I need to be more disciplined about getting away from the “water cooler” and back to work.

Any upcoming travel plans?
Disney World for spring break! Woot! And we’re hoping to get back overseas soon, but no definite plans yet.

Any big changes in your life since we last spoke a couple of months ago?
The month after you featured me, I put my long-time WIP in the bottom drawer for a while and started a new one. I’ve written about 30,000 words. This one, also a mystery, is set in Florence. It takes place during the 500th anniversary celebration of the world’s first culinary society.

Meanwhile, my blog partners at Novel Adventurers are working on an anthology of long short stories. We are an adventurous group comprising (besides me):

We’ll be writing about travel and adventure from international perspectives. It will be some time before it sees publication, but I’ll keep you posted. I think it will interest the Displaced Nation!

What’s the thing you most look forward to eating?
Christmas Eve in Italy is devoted to eating fish — usually seven fish dishes from antipasto onward. I’m trying out a new recipe for sea bass stuffed with frutta del mare (non-fin fish). I’m using clams, mussels, shrimp, squid and baby octopus, all well laced with garlic. And I always make the holiday custard that comes from my Tennessee childhood.

Can you recommend any books you came across in 2012 that speak to the displaced life?
The Lacuna, by Barbara Kingsolver. While it was published in 2010, I didn’t read it until this year, and I think it’s a masterpiece. It’s about a man with one foot in Mexico and the other in the US — but that’s a vast oversimplification. After the young man’s Mexican mother dies, he works for Frida Kahlo and Diego Rivera while Leon Trotsky is staying with them. He later moves to the US to join his American father. He eventually becomes a successful writer caught up in the McCarthy witch hunt. I don’t want to include spoilers here, but it’s fabulous. The boy/man is a foreigner in both countries and speaks both languages with an accent.

Do you have any New Year’s resolutions for 2013?
Not that I want to share.

Last but not least, do you have any upcoming travel plans?
No concrete travel plans at the moment. While composing these answers, I received an email about a tour of Uzbekistan that sounds really alluring. And I will probably go to the US to attend a mystery writers conference.

Readers, any questions for this rather motley (one former expat and two current ones) but highly creative bunch?

Images: Passport photo from Morguefiles; portrait photos are from the nomads (Larissa Reinhart’s shows her family in front of one of their favorite Japanese manga characters, Shin-chan, a sort of Bart Simpson of Japan — the creator, Yoshito Usui, had recently died).