1 Comment Posted by The Displaced Nation Team on October 21, 2016 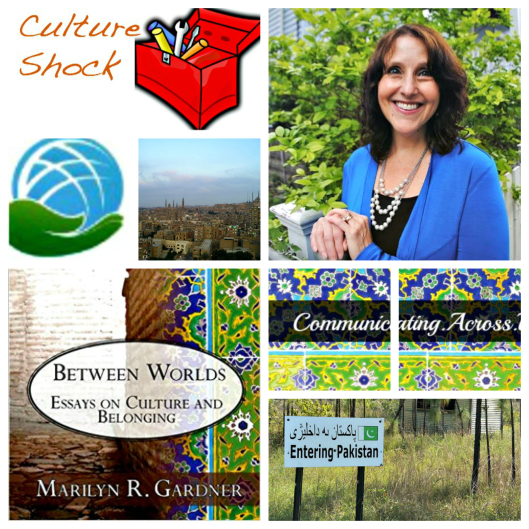 This month transitions enthusiast H.E. Rybol consults with a prominent member of the former expat/Adult Third Culture Kid community on how best to handle culture shock. They also discuss reverse culture shock, though her guest finds that term something of a misnomer…

I suspect some of you may already know, or at least know of, my guest this month, the multi-talented Marilyn Gardner. She is a blogger, author, consultant and public speaker. You may have come across her blog, Communicating Across Boundaries, or heard of her book, Between Worlds: Essays on Culture and Belonging, which is drawn from her blog writings and gets rave reviews from Amazon readers, who call her a “master storyteller.”

Born in small-town Massachusetts, Marilyn moved to Pakistan when she was three months old. She returned to the United States for college, became a nurse, and then tried to go “home” to Pakistan, only to be deported back to the U.S. after three months. She resumed her travels with marriage, producing five children on three continents and raising them in Pakistan and Egypt. When she and her husband finally repatriated, they arrived from Cairo at Dulles Airport with five children, 26 suitcases, and an Egyptian Siamese cat. They now live in Cambridge, Massachusetts.

Marilyn has a passion for helping under-served communities, including refugees and immigrants, with their health care needs. She started her blog in 2011 after returning from a trip to Pakistan where she worked as a nurse with internally displaced people. She also works with refugees in the Middle East, especially Iraq and Turkey.

Marilyn often speaks to groups and organizations on topics related to cultural competency, including culture and health care, faith and identity, and adult third culture kids.

She kindly took the time out from her busy life and travels to share some of her many cross-cultural experiences with us. (She conveniently lives 15 minutes from Logan Airport’s international terminal and flies to the Middle East and Pakistan as often as she can!) Check it out 🙂

Welcome, Marilyn, to Culture Shock Toolbox. Can you tell us which countries you’ve lived in and for how long?

In the context of cultural transitions, did you ever put your foot in your mouth?

I have lots of memorable stories—some more embarrassing than others, all funny for various reasons. As a child, I wasn’t always aware of the cultural mistakes—but my mom was! At one point when I was three years old we had been invited to a feast in the town where we lived. The women were in one room and the men in another. We sat on the floor and we ate with our hands. Evidently, the minute the food arrived, I lunged toward it and grabbed the rice with both hands. The older woman in the room was none too happy—she sniffed and said loudly: “The child doesn’t know how to eat!” Every Pakistani kid knew that you eat with your right hand only! My mom was red-faced and fumbled over her words. She vowed that once we got home, she would teach us all how to eat in properly Pakistani style! 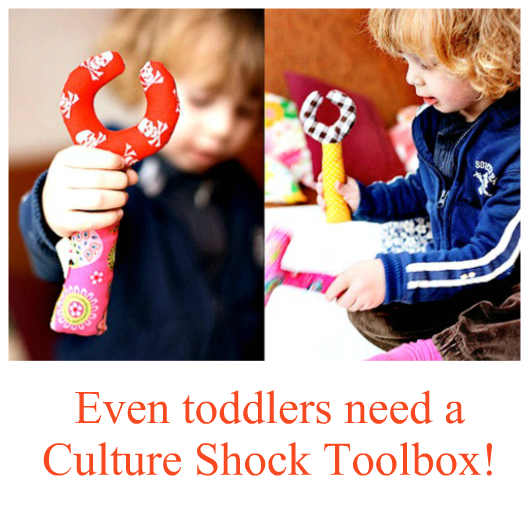 Wow, I guess your mom needed a toy version of the culture shock toolbox? Did you continue making blunders as you grew up?

As an adult, the rules changed and some mistakes have to do with language and others with behavior. For instance, when I first arrived in Cairo, I had trouble flagging down taxis. Then I realized that Egyptians would just yell loudly “Taks” and wave their hand wildly. So I began yelling loudly and waving my hands wildly. One day I did this while out with one of my Egyptian friends and she was horrified! “Why are you shouting?” she said. I realized I’d been observing male behavior, not female. A woman stands calmly and daintily waves down a taxi; only the men are so loud and aggressive. It was a good example that it’s not only about observing, it’s also about observing and imitating the right behavior. Language mistakes are also common and almost always funny. My husband, for instance, once tried to tell someone he was thinner than another man—but ended up saying he was cleaner than him.

What tools do you think are most useful in scenarios like these?

In health care we use the term “cultural humility.” You have to be humble enough to admit defeat when you get it wrong. In essence, this is a commitment to life-long learning about culture; a commitment to self-reflection and self-critique; a process whereby you continually place yourself in a posture of learning. I picture this as someone almost on their knees, looking up at another person and saying:

That’s what we expats, nomads, and Third Culture Kids all need to learn more about, continually posturing ourselves as being willing to grow and to learn.

That’s a powerful image! But have there also been situations you think you’ve handled with surprising finesse?

There is something about growing up overseas that puts you in a different place from the beginning, and that has stood me well. But again I would stress that there can also be an arrogance that comes from growing up overseas, as in “I know better than you do because I’ve lived this longer”—which can be totally false. We only know what we know, and we can’t possibly have experienced every aspect of a culture, which is why we always need that toolbox. What I think is different from the adult expat is that we Third Culture Kids have been shaped, not just influenced, by cultures other than our own. That distinction is really important. When you’re shaped, it’s like a potter shaping clay. You are molded by different cultural viewpoints, which makes it much harder to be ethnocentric and think your way is best. You tend to see all sides. That in itself has its own issues, the “chameleon effect” I call it—but we won’t go there today!

If you had to give advice to new expats, which tools in their culture shock toolbox would they use most often and why?

I have two. The first I’ve already mentioned: cultural humility. It is so easy to go as an “expert” and think you know it all. Cultural humility puts you in the place of a servant, a learner. You listen more, talk less, and observe everything. You ask questions not from a place of frustration but from a place of curiosity. In addition, I’d encourage new expats to develop what I call the “golden triad”—empathy, curiosity, and respect. All three are needed in equal measure and when even one of those is missing, we miss something in our experience.

What “reverse” culture shock experiences stand out for you the most?

For culture shock in my home country, one of the things that stands out for me is the cost of medications. I left a pharmacy in the middle of a transaction because I was given a bill for over s hundred dollars. I said with all the outrage I could muster “What? This medicine would be $3.00 in the place where I’m from!” To which the pharmacist looked bored and gave me a look that said “Well, obviously you’re not there so just pay up.” I left and said: “This is ridiculous!” I write about other examples in my book, such as paralysis in the cereal aisle and learning to speak “coffee”—I just couldn’t get the drink I wanted! There were so many choices and strange words. Expectations for who I was and how I would respond from dentist offices to work places also come to mind. Too many experiences to count! 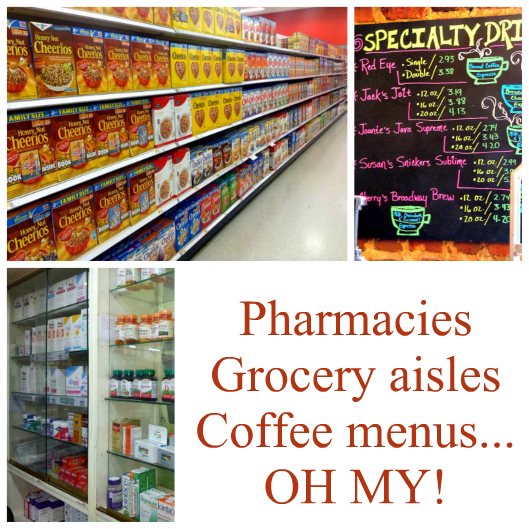 What are the best tools for dealing with (reverse) culture shock?

As I noted, my passport country was foreign in almost every way but language, so when I finally decided to treat it as foreign, I did much better. Not well mind you—but at least better! I watched and observed the rules, tried to follow the unwritten expectations. I cried a lot. I tried to find my happy places through coffee shops. I decorated my house with all the items I loved from the worlds where I had lived. I made friends with “locals.” I learned how to honor the goodbyes and to grieve even as I moved forward in the new. All of that helped in my adjustment. But what helped the most I think is giving myself time—it’s a process, and the longer we’ve been overseas, the longer the process of adjustment to our passport countries. Lastly, I’d like to note that staying in one place for a while doesn’t mean you grow stagnant. In the past I always equated stability with stagnancy, but that is simply not true. So slowly I have learned how to grow while staying in the same place.

Thank you so much, Marilyn, for sharing your stories with us. I love what you said about cultural humility. I think you’re right, once we start a life of living and communicating across cultures, there will always be a need for carrying a culture shock toolbox, and we should never forget that!

So, Displaced Nationers, do you have any stories to share that show a lack of cultural humility, and could you have used Marilyn’s customized toolbox at that moment?

If you like her prescriptions, be sure to check out her blog posts. You can also follow her on Facebook and Twitter. And if you’re interested in health care, you should check out the video series she has created with a film maker here and here.

H.E. Rybol is a TCK and the author of Culture Shock: A Practical Guide and Culture Shock Toolbox and the newly published Reverse Culture Shock. She loves animals, piano, yoga and being outdoors. You can find her on Twitter, Linkedin, Goodreads, and, of course, her author site.

One response to “CULTURE SHOCK TOOLBOX: Expats and TCKs, humility is your best cross-cultural tool—and don’t forget to pack that golden triad!”