CULTURE SHOCK TOOLBOX: How to be a diva in another culture–by not being one!

3 Comments Posted by The Displaced Nation Team on April 10, 2015 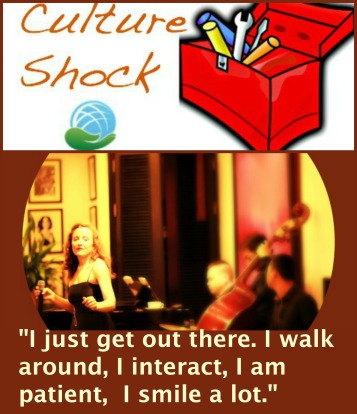 Columnist H.E. Rybol never saw a culture clash she didn’t want to fix. She calls herself a “transitions enthusiast” and credits her Third Culture Kid upbringing for giving her a head start in that department. That said, H.E. is always looking for new tools to add to her kit, and toward that end has been interviewing other displaced creatives about their culture shock experiences. Today she speaks to Kristen Rossi, a New Yorker who is on a mission to spread the Golden Age of Broadway/jazz throughout Asia. Okay, H.E. and Kristen, time to paint the town and all that jazz!

Hello, Displaced Nationers! Today I am delighted to introduce Kristen Evelyn Rossi to Culture Shock Toolbox readers. Kristen is an American actress, singer and voice over artist based in Southeast Asia. Besides being a talented performer, she is an entrepreneur and, while living in Bangkok, has co-founded two organizations: Broadway Babe, an endeavor to bring Broadway style to the Thai capital, and Musical Theatre for KIDS, which offers Broadway musical and theatre workshops for Asian youth.

I was lucky enough to catch up with Kristen recently and ask her a few questions about her somewhat unusual life of crooning her way around Asia, while also teaching others how to traipse the Broadway boards. I can see from the YouTube videos on her Website that she has racked up many successful performances; but I wanted to know: have there been any cultural flops?

Here’s what she had to say…

Hi, Kristen, and welcome to the Displaced Nation. Can you tell us which countries you’ve lived in and for how long?

I have lived in London (UK) for just under a year; about seven years in Bangkok, Thailand; Hanoi, Vietnam for the past four months; and I will call Macau home in May.

That is quite a few cultural transitions! You are a singer, so I’m not sure if this is the right question, but did you ever put your foot in your mouth? Any memorable stories?

As an entertainer I meet people from all over the world. One common mistake I make is in judging a guest’s nationality. In particular I find it hard to tel the difference between Japanese and Koreans. Sometimes I can tell the difference and sometimes it is hard, especially when they come in their business suits! Several times I have said, “oh are you from ___” and they will just say “no, we are ____” and then look at me very seriously. Awkward.

Another occasional mistake related to nationality is that I don’t always know what the people of a country are called. I remember the first time I was speaking with a diplomat from Qatar. I was about to refer to the people…and hesitated. It made me feel a little embarrassed. (Of course I know now it’s Qatari!)

How do you usually handle these situations?

I try to quickly move on to something I do know and like about the country or culture in question. For example, with Koreans I always say, “Oooh, I just love makgeolli (an alcoholic beverage native to Korea).” Once I say this, I usually get smiles and “ooooh!” and laughs. I’ve found that it helps to learn a few positive facts about the nation and its culture—so you can always change the subject quickly.

In general, how do you think you have handled your many cultural transitions?

Most of my transitions have been positive and quite easy I think because I’m a performer by nature. I just get out there. I walk around, I interact, I am patient, I smile a lot. I figure out how to make the best of the situation.

If you had to give advice to someone who just moved to a new country, what’s the tool you’d tell them to develop first and why?

Engage with the culture. I can only speak on behalf of Southeast Asia/Asia, but what I have found is people want to share their culture with you. They want to be good “hosts”; embrace this. Ask your colleagues or new friends to show you their favorite local artists (music, gallery, etc). Ask them to take you to their favorite coffee spot or their favorite place to get their favorite local dish. Most of the time, they will be flattered you are interested in them, happy to share their culture—and you’ll probably end up making new friends. Another important tool is language. Make an effort to learn even a few words in the local language. You can practice simple words at home and then go into the office and ask your local colleagues if you are saying the words right. They will LOVE IT, I promise!

Thank you so much, Kristen, for taking the time to share your experiences. It’s wonderful to hear that a Broadway diva knows when not to be a diva. And I think you’ve hit the nail soundly on the head in advising that the best way to handle culture shock is to engage with the culture head on. Show interest and ask questions; learn the language and ask for feedback.

Readers, what do you make of Kristen’s advice? Do you agree with my impression that she’s brought some of the energy of the “city that never sleeps” to this column?

H.E. Rybol is a TCK and the author of Culture Shock: A Practical Guide and Culture Shock Toolbox. She loves animals, piano, yoga and being outdoors. You can find her on Twitter, Linkedin and Goodreads. She is currently working on her new Web site and her second book.

3 responses to “CULTURE SHOCK TOOLBOX: How to be a diva in another culture–by not being one!”