CULTURE SHOCK TOOLBOX: Tired of constant adjustments? TCKs and expats, just be yourself!

Leave a comment Posted by The Displaced Nation Team on March 25, 2015 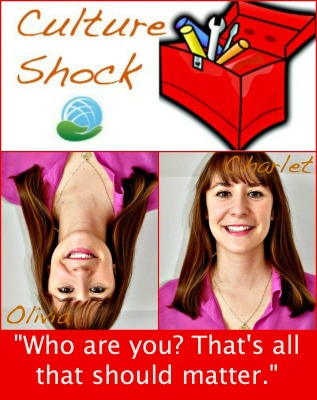 It’s turning into Third Culture Kid Week at the Displaced Nation! Today our newest columnist H.E. Rybol, who has a German dad and a French mom and is a self-described “transitions enthusiast,” interviews a fellow adult TCK, with a French dad and a Belgian mom, about the tools she used to face the inevitable culture shocks during her family’s many moves. Later in the week, TCK Talent columnist Lisa Liang will be interviewing the poet Maya Evans, who was displaced from Egypt as a child. And you know something else? H.E. recently interviewed Lisa on her own blog. Though not a TCK myself, I always learn a lot from this rather tightly-knit group. I expect you will, too.

Hello, Displaced Nationers! This month I am proud to introduce my first guest to the Culture Shock Toolbox column: Olivia Charlet, a fellow adult TCK and the founder of TCK Dating, a site that explores how our multicultural backgrounds influence our relationships. Olivia is fascinated by questions like: Are we TCKs happier with partners who share a similar nomadic background, or do opposites attract and we gravitate towards those who’ve lived in the same place their whole lives?

Today she has kindly agreed to answer my questions about the culture shocks she has experienced, along with tools she has used to overcome the feeling of not belonging. Here’s what she had to say…

Hi, Olivia. Thanks for joining me. First, can you tell us a little more about your background: which countries you’ve lived in and for how long?

Sure! I was born in Tokyo, Japan and lived there for my first four years. I then lived in Düsseldorf, Germany for two years. We later moved to Johannesburg, South Africa, for six-and-a-half years. Finally, I spent middle school in Vienna, Austria, for almost four years. I completed my last two years of high school in Hamburg, Germany, and then went to university in Boston, Massachusetts, for three years, after which I lived in Auckland, New Zealand, for six months. I have now been living in London for around five years.

That’s a lot of moving! And now we should move on to the topic of my column: cultural transitions. Can you recall any memorable occasions where you “put your foot in,” so to speak, during your many moves?

I still feel like I’m doing that, as an adult TCK here in London, especially when spending time with people who grew up in this part of the world. When I’m with a group of internationals, who are often my friends, this doesn’t happen as often since there’s this shared understanding that we all have slightly different cultural backgrounds. Let’s see… I think it mostly happens when I’m simply being outspoken—when I say things like “I love this!” or “This is amazing” or “It was terrible.” I picked up these expressions from American schools, I think. British people tend to be more understated. They’re more likely to say things like “Yeah, it’s alright” or “She’s nice.” It’s not so intense.

How do you tend to handle those inevitably awkward situations when you feel people may have misinterpreted you?

When I was younger I would have tried to mold into what they believed to be “normal” or “appropriate” behavior. But unfortunately (or fortunately?), I’ve become less and less likely to do this as I’ve gotten older. I want to be able to me. And express my difference. I don’t like pretending and I need to be authentic. If I’m trying to please them by saying what they want me to say, I won’t be genuine. Growing up outside of my passport country, I spent years learning how to adapt quickly and meet new friends. However, every year that goes by in London, I realise I can find people in the city that won’t expect me to be something else. They’re just fine with me being me (crazy mix of customs and all!).

Looking back, can you recall any situations that you handled with surprising finesse? Why do you think that was?

Well, that’s really my point. Having grown up moving around so much, I became really good at mimicking customs and behaviours—but not because of any natural ability. I just wanted to fit in. For instance, I played on a German football team in high school, and none of the girls spoke a word of English. They saw me as one of them after only a couple of months. Likewise, while attending university in the United States, I honed in on what the American students and professors needed to see for me to blend into their culture.

If you had to give advice to TCKs or new expats, what’s the tool you’d tell them to develop first?

Strangely, I don’t think I would have said this six months ago, but basically my advice is to truly know yourself. Who are you? What do you love to do? What do you not like to do? How do you like to behave? Are you loud? Are you soft-spoken? Extroverted? Be you. Because really, as much as we try to fit into another world, the truth is you’ll find people in no matter what culture who “get” you and understand you just the way you are. The more you try to change and adapt to what other people want you to be, the more you’ll lose a sense of who you are. And the most important thing (at least for me) about living in a different country is to not lose your core of self. What are your goals? What is your purpose? Who are you? That’s what should matter. And with that will follow meeting people who match that.

Thank you so much, Olivia, for sharing your stories and reminding us that, regardless of where we are, we’ll meet others who “get us.” In a sense your tool consists of putting away the toolbox when it’s a question of remaining true to ourselves.

Readers, what do you make of Olivia’s advice? Hopefully, it has you “fixed” until next month!

H.E. Rybol is a TCK and the author of Culture Shock: A Practical Guide and Culture Shock Toolbox. She loves animals, piano, yoga and being outdoors. You can find her on Twitter, Linkedin and Goodreads. She is currently working on her new Web site and her second book.