4 Comments Posted by The Displaced Nation Team on February 20, 2015

Elizabeth (Lisa) Liang is back with her column featuring interviews with Adult Third Culture Kids (ATCKs) who work in creative fields. Lisa herself is a prime example. A Guatemalan-American of Chinese-Spanish-Irish-French-German-English descent, she has developed her own one-woman show about growing up as a TCK, which receives rave reviews wherever it goes.

Hello again, dear readers. Today’s interviewee is filmmaker Rahul Gandotra, whose short film, The Road Home, has played in over 60 festivals around the world and won over 20 awards, including the Student Film Academy Award and British Independent Film Award, and was shortlisted for the 2012 Oscar nominations.

The film beautifully depicts a Third Culture Kid story; it also catapulted Rahul into the shortlist of up-and-coming filmmakers. 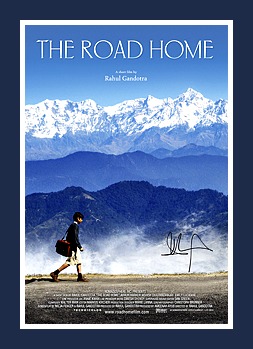 Here is the film synopsis:

Growing up in England, ten-year old Pico never wanted to go to boarding school in the Himalayas, and despite the beauty there, he struggles to fit in. When he’s bullied for insisting he’s British in spite of his Indian heritage, he runs away, determined to return to his home in London. As he journeys through a country foreign to him, Pico encounters others who mistake him for an Indian boy, forcing him to face the painful truth that the world does not see him the way he sees himself.

Welcome to The Displaced Nation, Rahul. I understand that you were born in Belfast, Northern Ireland, and grew up in eight countries across Europe, the Middle East, Asia, and the Americas. Why did your family move so much, and to which countries?
A lot of my moving around happened because of my father’s job—he was a doctor looking for new opportunities in different parts of the world. While it gets complicated with all the cities I’ve lived in, the general overview is: after being born in Belfast, I spent the first six years of my life in all four parts of the UK (England, Northern Ireland, Scotland, Wales). Then we moved to Saudi Arabia, where I spent three years before attending a boarding school in the Himalayas (in Northern India) for seven years.

How about college and beyond?
I received my undergraduate degree in the United States, where I lived for eleven years. After that I was in the Czech Republic for one year. Since moving to London for my graduate degree, I’ve been in England for the last ten years.

“If you want to see the Himalayas, they’re that way.” —Pico to a British couple touring India

I just remember having happy memories in Saudi Arabia. I think my time at my boarding school was also quite enjoyable after I adjusted to life there.

Come to think about it, I’ve had good memories in places where there was a TCK-like / international environment. The more monocultural the environment was, the less I enjoyed the place.

What led you to become a filmmaker, and did it have anything to do with your peripatetic upbringing?
I don’t know if my moving around pushed me into filmmaking. I think the moving around has given me many gifts that I use in filmmaking. The ability to see things from different points of view, for example, helps me in seeing an actor’s point of view—especially when it’s different from mine.

Looking back, I learned a lot of my storytelling from my mother with all the stories she told me. I guess the patterns and rhythms of storytelling just seeped into me, as she recounted one story after the other!

At what point did you pick up the technical skills that turned you into a filmmaker?
That came from a combination of “doing it myself,” formal education, and a lot of reading!

“But I don’t feel Indian inside!” —Pico to an Indian taxi driver

Have you found that “your people” tend to be other Adult TCKs in creative fields or does it really depend on the individual and what s/he evokes in you, whether it’s a resonance that’s artistic or political or personality-related or life-experience related, etc.?
I seem to gravitate to people who are either TCKs or people who have done a significant amount of traveling. They don’t necessarily have to be in the creative fields though.

Congratulations on all the accolades your short film, The Road Home, has won! What inspired you to tell this story?
The plot was a fiction but the themes were autobiographical in nature. The idea of looking like you belong to a particular region because of your skin colour but feeling inside that you belong somewhere else is something that I wanted to illuminate in the short film.

Here is the trailer:

And if your readers would like to watch The Road Home, they may do so here.

I understand you are now making a feature-length version of The Road Home. Where are you in the pre-production phase?
I’m in the financing stage where I’m hoping all the investments will be in place so I can shoot the feature film soon. (If there are any interested investors, please do contact me!)

“Why not speaking Hindi, huh? Important your knowing your mother tongue.” —Taxi driver to Pico

Are you working on other projects?
My screenwriting partner and I have been writing other screenplays but those are bigger in scope, and we’ll present those to the world when I’ve completed my first feature.


You can see more here.

Congratulations again, Rahul, on the success of The Road Home, all of the commercial work you’ve been doing, and the screenplays you’ve been writing. You’re a true “ATCK creative” and we’re hereby nominating you as Best Up-and-Coming Director for our Displaced Oscars!

Readers, please leave questions or comments for Rahul below.