GLOBAL FOOD GOSSIP: ‘Tis the season to be jolly—and for that I recommend crunchy sweet potatoes

Leave a comment Posted by The Displaced Nation Team on December 9, 2014 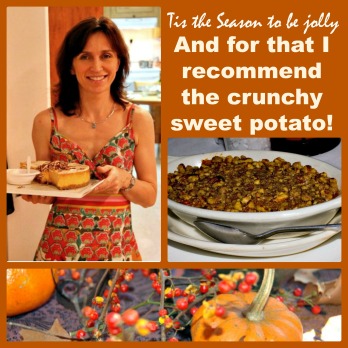 Joanna Masters-Maggs was displaced from her native England 17 years ago, and has since attempted to re-place herself in the USA, Holland, Brazil, Malaysia, Venezuela, Saudi Arabia, and now France. She describes herself as a “food gossip”, saying: “I’ve always enjoyed cooking and trying out new recipes. Overseas, I am curious as to what people buy and from where. What is in the baskets of my fellow shoppers? What do they eat when they go home at night?”

Last month I had intended to contribute a pleasant little piece invoking “memories of Thanksgivings past”—but I am afraid I just wasn’t feeling in a terribly thankful sort of mood.

That was a shame, really, as Thanksgiving is one of the few holidays I have been lucky enough to experience overseas that my crabby little heart actually embraces. As a foreigner living in the United States, my experience could be likened to that of a grateful orphan, adopted warmly by a family as a vaguely interesting addition to proceedings.

Really, what is there not to like? Good food, and plenty of it, a lot of wine, usually in the host family’s nice crystal—and ABSOLUTELY NO PRESENT-GIVING other than generous hostess gifts.

It was actually the contemplation of present-BUYING that prompted my spell of bad humour. Black Friday, the day after Thanksgiving—which Americans traditionally spend at pre-Christmas sales, in a frenzy that can take on the appearance of contact sports with credit cards—has now arrived in France, my current home.

It seems that even the French have lost their ability to say non to foreign habits that threaten their own culture.

All of that said, I regret that I never sat down and wrote the column I originally had in mind. Soon after I made that decision, the thought of those cosy Thanksgivings where outdoor grey light gives way to the warmth of candles and fires began to get the better of my jour noir.

Especially when I remembered the BEST THING OF ALL about Thanksgiving: it affords an opportunity for Americans to demonstrate their magical ability to convert healthy, vitamin-brimming vegetables into artery-clogging, heart-stopping not-much-time-left-bombs.

The general principle seems to be to cook out as much of the vegetable’s vitamin content as possible, along with its texture and possibly colour. Next comes the flavour makeover. Those green beans must taste of ham hock and bacon, not bean. The loss of beanly texture is viewed as desirable—and really, who enjoys the blackboard squeak of green beans on teeth?

However, I cannot approve of the makeover given to the sweet potato, whose texture when cooked is always soft. Sweet potatoes require a little more bite—and how!

The joy of this vegetable is that, even after the rather horrifying treatment meted out to it, often involving marshmallows, the B vitamins remain intact allowing it to count as a health food still.

If there are to be any complaints about Thanksgiving and, given my heritage, there must be complaints, it would be about the bird. As my own father once said of Christmas lunch in the UK:

If it’s meant to be a fancy there should be proper meat.

For him this means beef, I believe. I’m open to other meats, other birds even, but I agree with my dad’s sentiment that the Turkey is a duffer in pretty much every respect. Even at its most organic, just shot and plucked best, it’s just a stomach filler for crowds. Does anyone, I wonder, ever consider serving two smaller but glorious geese rather than one ho hum turkey?

On the bright side, though, who needs meat at all when you can have sides like green-bean-and-bacon casserole?

Since my mood has lifted somewhat with all this talk of misbehaving veggies, I have decided to share the cheer by offering you the sweet potato recipe I love. It was given to me years ago and involves brown sugar, pecans and cinnamon baked to a crisp and crumble like finish—plenty of crunch and bite!

For the topping:
100g (half a cup) brown sugar
40 g (one third a cup) plain flour
40g (one third of a stick) butter
140 g (around one and one third cups) chopped pecans—you can substitute with other nuts if necessary, but I do think pecan is the best for this as it has a pleasing sweetness. (Walnuts, the natural substitute, can be a little bitter.)

To make the topping, rub the butter into the flour with your fingertips until the mixture resembles breadcrumbs. Stir in the sugar and nuts. Sprinkle evenly over the potato mixture.

Bake for half an hour until golden brown—keep an eye on it, though, as pecans burn easily.

Fellow Food Gossips,do you have any post-Thanksgiving (or pre-Christmas) food stories & recipes to share? And also please let us know: do you agree with Joanna’s take on the sweet potato?

Cool Columns, Global Food Gossip France, Global Food Gossip, It's Food!, USA, What a Displaced World, World celebrations
← In this novel of displacement, water shapes the land, the country and people’s lives, almost beyond recognition CHUNKS OF DRAGONFRUIT: The story of an expat for whom Burma literally becomes the Tropic of Cancer →