Leave a comment Posted by The Displaced Nation Team on June 17, 2014

Joanna Masters-Maggs, our resident repeat-expat Food Gossip and Creative Chef, is back with her column for like-minded food lovers.

“I heard that wine makers in the Napa Valley have found that picking grapes at night yields better wine,” I said to my husband as we walked the dog around our little neighbourhood.

He followed my line of vision to an apricot tree, which, every June, heaves with the luscious yellow fruit.

“I still think it would be a stretch for that snippet of hearsay to justify nicking the neighbour’s apricots to make jam,” he said.

But of course, I have thought of it, and often. After three years of living in France, I realize that I have entered into the kind of seasonal cooking that would make the hearts of certain editors of food magazines sing. Preserving has become a huge part of my life. Whenever I see a tree bursting with fruit, I am mentally pulling my preserving pan out of the pantry. Indeed, no tree is safe. My own cherry tree has been stripped bare of its rich dark cherries, which are now satisfyingly preserved in jars with wide red and white checked lids and little fruit decorated labels. Kitsch? Twee? Call it what you will.

Seasonal preserving not only makes me feel smugly capable, it also provides a connection with a past where preserving was a necessity and not a lifestyle choice. In France the changing seasons are very clear and marked by the varieties of available produce. This is not always the case in other countries where I have lived. Sometimes seasons are blurred due to imports for those able to pay, while in others there is a shortage of actual seasons.  I have always thought we should be grateful Vivaldi was not born in Malaysia.

Here in Aix I buy my fruit and vegetables in a large farm shop. As the year progresses, the produce changes. Strawberries come in around April or May and I watch the prices drop and drop until 4 Euros buys you 2 kilos and you are happy to macerate and preserve to your heart’s content. As the supply of strawberries peaks and peters out, in come the apricots, at jaw-droppingly low prices. In England I would feel guilty to pay that much and make jam, preferring instead to use fewer and to put them where they are visible. So the season goes on with harvests of figs, walnuts, grapes and avocados. Even after years of living overseas, it still amazes me that something as special to a Brit as artichokes or avocados can be displayed in barrels as if they were as common as potatoes in Ireland.

I hope I never lose the delight in this aspect of expat life.

I can get quite upset thinking of the English strawberry. The best of the best, produced in the county of my birth, Somerset, in the little village of Cheddar. Poor Cheddar, famous for its wonderful cheese, which has been knocked off and plasticized the world over until most people outside the UK don’t even know what real Cheddar is. On top of this, the reduction of its strawberry industry too. The problem was that for all its well-drained and optimal facing slopes, the season was only weeks long. It couldn’t produce enough fruit to satisfy the appetite of the nation which stamped its foot and demanded more and cheaper strawberries, and a longer season to boot.

The nation should be careful what it wishes for. Fruit varieties have been tampered with and grown under plastic so that we can enjoy strawberries for longer than the two weeks of Wimbledon. Flavor has been compromised — of that there can be no doubt. But you can still buy the real thing in Cheddar, or grow your own, and it’s well worth doing if only to see what this fruit should actually taste like: strawberry, if you are interested, and not water.

Then there are the imports. I am all for world travel, but not for soft fruit on which an indefinite travel ban should be imposed. The waxy Spanish strawberry is not only nearly devoid of the flavor of strawberry, but its texture is decidedly unappealing, being as coarse and waxy as an ageing fruit-pickers cheeks.

How much do I love a good strawberry? A bushel and a peck and some in a gourd.

Having said all that, I am (somewhat surprisingly) delighted to see the vast quantities of Spanish strawberries in my French market. There are two points in my rather shifty defense. Firstly, they are cheap, which justifies their use in jam. Turning a perfectly grown, traditional Cheddar strawberry into jam would be a crime, but boiling the heck out of the Spanish and adding sugar can only act to improve the flavor they lack. Secondly, the presence of the Carpentras strawberry gives a taste of how things should be.

The village of Carpentras, in the Vaucluse region of Southern France, hosts a strawberry festival in April each year. I like to think of this village as Soft Fruit Soul Sister to Cheddar. Yet, unlike Cheddar, Carpentras has been successful, in that typically French way, of protecting its strawberry: as fiercely as Champagne growers have protected their name under a registered trademark since 1987. We have much to learn from them.

Several varieties are grown. 90% of production is given over to the parajo, while its posher cousins, the ciflorette and the garriguette, are favored respectively by patissieres and those who like their fruit as it comes. These elite strawberries have retained their, well, strawberrishness with a deeper, fuller flavor. Price is higher but it is a price that locals and fancy restaurants alike are willing to pay for flavor. My favorite is the garriguette which, at 3.90 Euros this morning for 250g (16 strawberries), is nearly double the price of the regular Carpentras, but so well worth it.

This is the taste of the homegrown strawberries I remember from my youth, complete with that rich, almost caramel-like flavour. Heaven, and worth every centime. 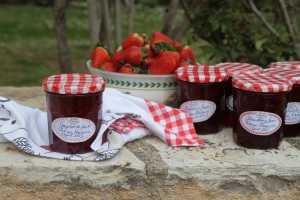 So here in France I can enjoy quality in my tarts and quantity for my preserves, and that, I think, is a perfect combination. In England it is less of a clear cut and easy situation. Most of my local Pick Your Own farms have closed in recent years and, outside of two or three beloved greengrocers, everything is plastic punneted mediocrity. Not awful, but not good and definitely not strawberry.

Back in France, as the year progresses, so my level of stress rises. Two batches of strawberry, one of cherry, brined olives rinsed and now bottled in olive oil, and apricot in the making, have placed considerable strain on my supply of jars. Yet I am always thinking greedily ahead. Figs are already on my mind, yet here I am in the throes of moving house. Somehow, the making of that Fig Confit must happen. I can’t miss figs at those sorts of prices. They must be preserved before my pans are packed. Or immediately after arriving at the new place before my boxes are fully unloaded. Will I be able to do it? I feel the panic rising. No amount of telling myself that I don’t actually have to do it this year has any effect. I have to. I must. It’s just the rhythm of the year and I can’t bear to miss the joy of opening a jar at Christmas in the midst of an English winter. Just a little ray of Provence sunshine from my other home on a cold, cold day. A little fig confit to serve with the foie gras adds a French touch to the festive season.

The stress is intensive by that Apricot tree which still preys on my mind. Those wasted golden globes are just asking for my attention. It really would be a crime to let them wither on the tree. Wouldn’t it?

Joanna was displaced from her native England 17 years ago, and has since attempted to re-place herself and blend into the USA, Holland, Brazil, Malaysia, Venezuela, Saudi Arabia, and now France. She describes herself as a “food gossip”, saying: “I’ve always enjoyed cooking and trying out new recipes. Overseas, I am curious as to what people buy and from where. What is in the baskets of my fellow shoppers? What do they eat when they go home at night?”

Fellow Food Gossips, share your own stories with us!

Images: All images from Joanna’s personal photo albums, and used here with her permission