CHUNKS OF DRAGONFRUIT: The story of an expat for whom Burma literally becomes the Tropic of Cancer

1 Comment Posted by The Displaced Nation Team on December 11, 2014 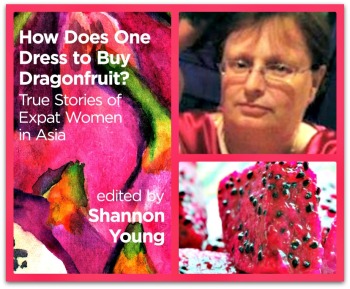 First of all, if How Does One Dress to Buy Dragonfruit? True Stories of Expat Women in Asia isn’t on your Christmas list, it ought to be. As regular Displaced Nation readers will know, Dragonfruit is a new anthology edited by columnist Shannon Young. Shannon has been sharing a few tasty morsels with us over the past couple of months, and we have been repeatedly amazed at the window afforded on Asia by these expat women writers. This is the third installment. The first can be read here; the second, here.

For this month’s excerpt, I’ve chosen a piece by Philippa Ramsden. A Scotswoman, Philippa is a development and humanitarian professional, writing in any leisure time. She had been to Asia only once when she stepped off a plane in Kathmandu in 2000 to take up a new job, with no idea what to expect—and has been in Asia ever since. She has lived and worked in Nepal, Mongolia, India, Sri Lanka, and now Burma/Myanmar.*

Philippa actually submitted more than one piece for consideration in the expat women anthology, but this one stood out because it addresses head-on one of the scariest things an expat can experience: receiving a life-threatening diagnosis abroad. Philippa is a true inspiration for handling such a significant challenge without letting it undermine her sense of wonder and appreciation for the country she currently calls home.

I am honored to share the beginning of Philippa’s story here.

“Moving to the Tropic of Cancer,” by Philippa Ramsden

Rainy season in Burma is spectacular. At night, I love to lie in bed, listening to the torrential rainfall drenching the earth and bringing life and vitality to the land. Between showers, the air is so thick that you can hear the moisture dripping from leaves and branches. And if you listen very carefully, you can almost hear the grass sighing and burbling with delight as it wallows in the rainwater. When the rains come down, they do so thick and fast. Even with an umbrella and raincoat you are quickly drenched. In the intervals between the downpours, it is hot, humid and sticky.

When I arrived in Burma in mid June of 2009 to start a new job, rainy season was in full force. Having lived in Asia for more than a decade, I have become close friends with the monsoons, which bring welcome respite from stifling heat and humidity. Being caught in a sudden downpour, or even listening to the rain from outside, brings energy and feels like a revitalising force. I have many fond memories of standing, drenched to the skin, grinning from ear to ear after only a few moments in an unexpected cloudburst. It helps that the rain is warm! Coming from Scotland, where the rain can be just as heavy but usually accompanied by grey skies and often a biting wind, I have never tired of this warm torrential rain.

When the rains make their first annual appearance, they usually arrive dramatically, and the world is transformed. There is a festive feeling; smiles and laughter return. The sight of children playing in the rain, splashing in puddles and letting the rain soak them through is ubiquitous. And not just children—adults too! The city turns green, mosquitoes hold crowded parties, and the frogs grow to such a size that they sound like male tigers as they croak in the night. The ground and pavements are covered with a layer of slippery, slimy moss in the hidden spaces which have not already turned to mud.

Such was Yangon when we arrived with our suitcases, papers, and a crate of enthusiasm, to take up a new life in this enigmatic country. It is quite an experience looking for a home in such a setting. We had a temporary place to live but were keen to settle and unpack properly. In those first weeks, we tramped round a number of potential homes, the mosquitoes nipping at our ankles and the rain teeming down.

It was not too long before my husband found the perfect place, a simple bungalow within walking distance from work. We made arrangements to view it, and the heavens opened shortly before the visit. The road outside the office flooded, and we had to wade through warm, murky water to get there. It was well worth the effort, though. The bungalow was indeed perfect: modest, but deceptively spacious. The wooden floors gave it a cosy warmth and the large, high windows made it feel light and optimistic. Unusually for Yangon, it had ceiling fans throughout. My fear of earthquakes was assuaged by the fact it was all on one level. The generous garden was gloriously tropical and mature, bounded by bamboo, mango trees, and hedging, and filled with pink, white, and yellow bougainvillea, crimson foliage, pink and purple hibiscus, and scented frangipani. It was ideal. We would share it with several families of geckos, some of which were the tiniest ones I have ever seen. They added to the nighttime chorus with their characteristic chirruping sound.

After a series of one-year postings in different countries in the South and Southeast Asian region, we were very happy at the prospect of a longer posting. We were keen to move into this peaceful space and finally unpack. Particularly back in 2009, Burma had an air of mystery, and were eager to learn about our new environment. We made arrangements to rent this house and moved in as soon as everything was in order. It was a marvelous feeling to be settling at last.

By late September, the rainy season had truly left its mark: the vegetation was lush and vibrant from the rains, clothes seemed to be neither clean nor dry, almost everything was growing a layer of mould, and the humidity made me feel constantly grimy.

One unremarkable evening, as another hot, sticky, and wet day was drawing to a close, I had my usual shower to refresh myself and clean off the day’s grime. It was in the shower that I felt a hard, solid area where one should not have been, in my left breast.

I was instantly transported back in time twenty-six years to when I had found a lump one evening while bathing. I vividly remembered the sensation of sick fear as I checked that I had not imagined it. It had indeed been real all those years ago, and I had had it investigated promptly the next day with my local doctor. It had turned out to be nothing sinister and was shrinking by the time I had a hospital appointment a couple of weeks later. Although the lump at that time was not worrisome, the emotions and fear that I felt at that time were very real.

My reaction was different, however, on finding this lump all these years later. My stomach didn’t sink in quite the same way. In the previous days, I had noticed some changes in my left breast, and was intending to seek medical advice. However, I believed these to be related to my age. When my fingers rested on the hard mass, I knew that the lump plus changes must constitute worrying signs. This really could be sinister this time. I comforted and contradicted myself, focusing on the fact that eighty percent of breast lumps are benign, and moreover, there was no history of cancer at all in my family.

I swallowed the sense of fear and uncertainty. My mind had to absorb the possibility that I might have cancer. And I was living in a new and foreign environment. I had no idea what the implications might be.
*We have chosen to use Burma and Rangoon rather than Myanmar and Rangon.

Readers, if you enjoyed that morsel, I hope you will at least consider downloading a sample of the Dragonfruit anthology from Amazon or purchasing the book: the e-book and paperback of are available at all major online retailers.

And if this excerpt has made you curious to learn more about Philippa Ramsden, her blog is Feisty Blue Gecko. You can also find her on Facebook and twitter. She has written several meditations on the challenges and joys of life in a foreign environment—and they are all fascinating. She is currently working on a memoir.

Thank you so much, Shannon! Displaced Nationers, do you have any responses to the opening of Philippa’s moving story?

Before I go, here’s another reminder to purchase a copy of Shannon’s wonderful anthology. What better end-of-year gift for the expat woman in your life (or for yourself, if that is you!).

One response to “CHUNKS OF DRAGONFRUIT: The story of an expat for whom Burma literally becomes the Tropic of Cancer”