HERE BE DRAGONS: A pox on your expat life! How suffering an illness abroad can inspire fantasy writing

8 Comments Posted by The Displaced Nation Team on September 23, 2014 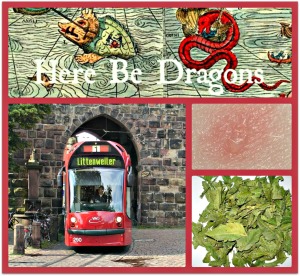 HERE BE DRAGONS is back, a column produced by fantasy writer Andrew Couch, an American expat in Germany. We at the Displaced Nation have long been aware of the strong connection between fantasy (think Alice in Wonderland) and a life of international travel and residency. And now Andrew has got us pondering the idea of turning our (mis)adventures into fantasy stories!

A few weeks ago I came down with an adult case of the chicken pox. Seriously, I am in my mid-thirties and never had chicken pox as a kid.

The experience got me thinking about the oddities of dealing with a disease as an expat living abroad—and then about how this could become a source of material for a writer like myself, who enjoys leading characters around fantasy realms.

Getting sick in Germany is not the same as getting sick in the United States. To begin with, we don’t have a car, so my wife took me on the tram to see the doctor. He subsequently told me that I shouldn’t really have left the house; my local health service would call me.

In the U.S., we would be driving everywhere and the local health service (do we have one?) couldn’t care less about a case of the chickenpox.

In the end I didn’t get a call from the local health service, nor did my Twitter friends’ predictions I would end up being quarantined come true. And yet I can’t stop thinking about the exposure to disease that comes from riding the trams. Did I get sick because someone else had to ride the trams? Public transport is a glorious thing, but it definitely carries health risks.

Another thing that was strange: the German doctor told me to pretty much suck it up and try not to scratch. Germany, in my experience, is not the super-medicated world we commonly find in the United States.

In the end, despite the fear-inducing comments from friends about how horrible the chicken pox can be as an adult, I had only one day of itchiness amidst a week of hideous red bumps.

Okay, you might be saying, that was really awful, but what does it have to do with fantasy writing? Well, as I mentioned in my first post of the series, the expat experience is a wonderful metaphor for encountering a fantasy world. Why not use the episodes and observations from your life overseas to conjure up fantastical tales?

Here are three ways I can envision using my illness in future stories:

1) Add a plot twist about the threat of sickness and disease and search for a cure. Perhaps I’ll given one of my characters a fever and have a foreign medicine woman tell him to rub certain leaves all over his body. How does he respond? Oh—and if you think this is just the realm of fantasy, I did have a friend recommend some Indian neem leaves as a powerful agent for curing skin conditions. I even would have tried them had we been able to figure out how to import them into Germany.

This device could cut another way as well. Perhaps my characters are living in the depths of a jungle, with medicine oozing from every berry, leaf and root. They would likely feel creeped out if required to pay a visit to a city doctor, whose remedy consists of handing out bottles of nondescript white tablets.

2) Use sickness to explore my characters at their worst. In my case, for instance, all I want to do when ill is snuggle under a blanket, drink massive amounts of orange juice, eat grilled cheese sandwiches and watch movies until it goes away. I also want someone to bring me these things. I really would be in trouble if I was not supposed to leave home and didn’t have a wonderful wife (or even friends) to bring me food.

Would my fantasy characters become similarly dependent? How would they cope if deprived of their favorite comfort foods and activities?

3) Explore the fear that comes from a disfiguring illness. You may have had chicken pox when you were small and can no longer remember how you felt. But I tell you this, as an adult with an active imagination, chicken pox are frightening. Bubbly boils cover the body and itch like crazy. Without a ton of stretching (oh, and the fever helped this, too), my imagination could easily have convinced me I had the plague. I refrained from looking in the mirror much, but my wife tells me that I looked as awful as I felt.

And now let’s transfer this physical aspect of disease to fantasy culture. What if my characters didn’t know the long-term impact of the pox? What kind of panic would this induce? Or maybe they know the pox to be non-fatal, but how do they deal with having something that makes them look hideous? Another possibility is that an alien character gets the pox but doesn’t understand when the natives don’t react: is this because they expect that person to die, or because they know the disease will run its course? Terror prevails until that question is answered…

A few weeks later, I am recovered mostly. I am left with stories to tell.

I also have a mind full of diseases to inflict on future characters in fantasy stories. As the Germans say:

“After every rain, there will be sunshine.” Similar to “every cloud has a silver lining” but not quite the same as it speaks more to the inevitability of change. “This, too, will pass” would be a closer translation.

For expats, the risk of getting seriously ill while abroad is greater than it is for occasional travelers. Try to recall your first time being sick and dealing with the local culture. Was it more frightening than at home? What about trying to communicate with doctors in another language while suffering from fever? What if your favorite remedy or comfort food just didn’t exist? All of these are situations you can include in your fantasy stories.

Andrew Couch has been a fantasy book nut since childhood; he really has not grown up much since then. After struggling to write his own games for years, he is now creating fantastical worlds in a series of novellas that echo the TV shows, anime and role-playing games of his youth. Beyond fantasy he is an avid blogger and a world traveler who resides in Germany. To learn more about Andrew, check out his blog, Grounded Traveler, and follow him on Twitter: @groundedtravelr.

8 responses to “HERE BE DRAGONS: A pox on your expat life! How suffering an illness abroad can inspire fantasy writing”