2 Comments Posted by The Displaced Nation Team on February 19, 2014 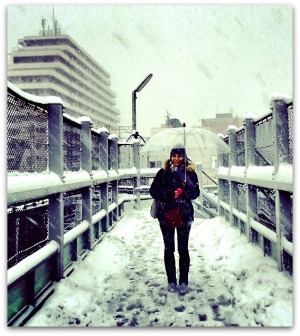 So is snow the same in Tokyo? Kind of, except everyone carries see-through plastic umbrellas! JESS IN JAPAN in a rare heavy snowfall earlier this month. Photo credit: Hiro Awanohara

Today we welcome a new guest columnist: Jessica Awanohara. Any relation, you may wonder? Yes, she’s the American wife of my nephew by marriage, Hiro. The pair, who’d become dyed-in-the-wool New Yorkers, surprised us all by announcing they were moving to Tokyo at the end of 2013. Naturally, I was curious: how is Jessica adjusting to life in that “through-the-looking glass” city? Is it different to live there versus just visit (which she’s done many times in the past)?

There are many things to love about moving to a new country and a few things not to love. Most expats eventually strike a balance between the two.

But are there also places where the love-hate continuum doesn’t apply? I’m beginning to think so ever since I moved from New York to Tokyo in late December of last year. A bad mood is impossible to sustain in this city because everything is hilarious. Wherever you turn, there is something riotous laying in wait…and the next thing you know, you are collapsing in fits of laughter.

I’ve been in Tokyo for over a month now, and have delighted endlessly in many things.

Here are six off the top of my head:

1) Trains are in happy colors.

I live on the Keiō Inokashira railway line, the color of which is bright pink. Not the barfy green of the 4/5/6, nor the almost-royal blue of the A/C, nor the vibrantly atrocious orange of the B/D/F, in New York City. Rather, this line is a sparkling and spritely pink mixed with what I imagine to be the color equivalent of delicious farm-fresh milk. It’s the pink of the gods: the Disney Princess Gods.

2) Subway stations are deeply amusing, so to speak.

Think of New York City’s deepest subway platform: the 63rd Street station on the F Line near Hunter College, or the 191st Street Station on the 1 Line. Imagine how long those escalators are, and now double it—no, triple it! Triple it, and add a couple of extra escalators and a brick-and-mortar set of stairs to the street, and now you have an idea how deep the average street to subway platform trip is in Tokyo. Have you ever tried going to Roppongi, or Azabu-Jūban? Try it!! You may feel as though you’ve walked far enough to be back in New York. Good for quite a few laughs!

3) People on the subway may be dressed much better than us, but they smell just as funny.

How could men in suits and overcoats, or women in designer outfits, smell as bad as we much more disheveled Americans do on the subway? Before taking the leap of moving to Tokyo, I dreaded the idea of being taller, sweatier, and worse smelling than the average citizen on a notoriously packed Japanese train car. Rest assured, inquiring minds, curdled humans smell much the same in Tokyo as in New York: like sweat socks… By the time summer arrives—I’ve visited here often enough to know that summer is no joke!—I should blend in perfectly fine, a thought I find immensely entertaining.

4) Furniture delivery can be farcical, especially when it doesn’t fit through doors.

After a month of living out of another person’s apartment, my husband and I moved into our own place a couple weeks ago. We ordered what can aptly be described as the world’s most beautiful bargain basement sofa and had it delivered to our new, completely empty home. No sooner did our large and lovely couch arrive, than it was exchanged for its tiny, two-seater cousin—that is, tiny enough to actually fit through our front door. In Japan, small is beautiful. How could we have overlooked this basic principle? Our hilarity could not be contained…

5) In Tokyo, cost-of-living statistics are a bit of a joke.

Really, Expatistan.com? I appreciate the cost-of-living data you supply for this great world’s great cities, and am aware that countless magazines and listservs use your data for splashy articles sizing up one city against another. But I’m confused about your aim. On your website it says you want to give people the information “to live as nicely as you live currently.” That means…what exactly? How does one measure the quality of life across cultures? And what about that ideal, which many of us expats hold dear, of “When in Rome…” I can lead the same life materially in Tokyo as I led in New York, but that’s not what makes me happier in this city. Sure, living the luxury life in Tokyo is expensive, but numbers are not the point. The point is, cost-of-living stats are hilarious in a city that gives me such joy!

6) Appliance installation is a riot and a half.

In a related hilarity, it is true that most Tokyo apartments are not outfitted with appliances normally packaged with an apartment in NYC. We had to order our own refrigerator and washing machine (both standard fixtures for the Tokyoite). Our refrigerator, a lovely and highly rated model, cost us all of $500; the washing machine was comparably rated and lower priced. As with anything you buy larger than a shopping bag, you have it delivered to your home for maybe $30 or $50 additional dollars, or oftentimes for free. The hilarity lies in the fact we had two choices when the refrigerator and washing machine were shipped—the delivery men would either leave them at our front door OR huff them up countless flights of stairs and install the machines for the low, low price of…one U.S. dollar. Tough choice, right? Hahaha.

No doubt about it, Japan is a barrel of laughs. Reaching beyond the cruel and unusual TV game shows, the Hello Kitty cafes, the Fruits magazine documenting outlandish clothes in the Harajuku area, and other enduring staples of pop culture in this part of the world, I’ve found countless things to delight me during my first month of residency in Tokyo. My main takeaway is how excited I am to let this town continue to delight me for years to come.

Readers, what do you think of Jess in Japan’s observations of her new home? I don’t know about you, but I find it ever-so-amusing that so many of her thoughts are focused on subways and apartments: not so different from life here in New York!

2 responses to “JESS IN JAPAN: Tokyo’s top 6 delights from my newbie expat perch”