Thanksgiving, the ultimate holiday of the displaced—and still going strong

Leave a comment Posted by ML Awanohara on November 27, 2017

The Displaced Nation feels a special kinship to Thanksgiving. It strikes us as being, when all is said and done, the holiday of the displaced.

Quite a lot is being said about Thanksgiving these days. But before we get into that (actually, we may not have much time to get into it), let’s quickly review what we know to be true about the holiday’s origins:

What we haven’t been able to establish, however, is how both Native Americans and settlers came to be at the same feast. Did the Pilgrims invite the Wambanoah out of gratitude for their assistance in planting corn and showing them where to fish? We simply don’t know. What we do know, of course, is that the Native Americans were eventually displaced from their lands.

It is hardly surprising, then, that some now see Thanksgiving as a story of a displaced people thanking the about-to-be displaced natives.

Hmmm… Does that story make the United States the closest thing the world has to a Displaced Nation?

But I digress. Returning to the topic at hand: no matter how you slice or dice it (hm, an appropriate Thanksgiving metaphor?), Thanksgiving remains a tradition of a shared harvest feast, one that started up in North America (yes, the Canadians celebrate it, too) around four centuries ago and is still going strong today. In fact, many of us continue to add layers of displacement to our Thanksgiving meals, as the following round-up of food-oriented posts will attest.

As Fodor’s Travel points out in a recent post, you can now have your turkey (with all the trimmings) in…Turkey! Also in France, Argentina, Australia, China…

Of the menus described in the Fodors post, I would pick the one offered by the Restaurant at Brown’s, in London. Admittedly, I’m biased because of having lived in England for quite a few years (my first displacement). How I wish I’d been able to have Thanksgiving in a restaurant then!

England may not be known for its food, but something the English do superbly well are desserts, aka puddings. And for dessert on its special Thanksgiving menu, Restaurant at Brown’s offers pumpkin and Peruvian gold chocolate pie. Sounds scrummy.

Something else the Brits do well are vegetarian dishes. Now I’m not a vegetarian, but I almost became one during my expat years because Brits are so creative with veggies.

Were I to indulge in the Thanksgiving meal at the Restaurant at Brown’s, I might be tempted to order the Montgomery’s cheddar pie instead of turkey. One reason is that I’m not a great fan of roast turkey. Another is that I’m tempted to eat cheddar any time I’m in the Birthplace of Cheddar Cheese, it being one of my all-time favorites (apologies to France).

The traditional menu keeps being tweaked

Take, for example, food blogger Eugenia George, a Salvadorian married to an American and living in Southern California. “No one else does turkey like we do,” she declares in her post Salvadorian Holiday Turkey. She uses her mother’s recipe, which involves roasting and then braising the turkey in a tomato-based sauce that’s packed with flavor and spices. “Dry turkey? Nope. Not this one,” she writes.” It’s juicy, succulent, and the meat just falls off the bones.”

Another good example is scifi and fantasy writer Brenda Clough, the daughter of a Chinese immigrant to the United States and a Third Culture Kid (she spent much of her childhood overseas). Like George, she credits her mother with making Thanksgiving more delicious. She says her mother figured out how to make the Thanksgiving turkey Chinese by stuffing it with sweet, glutinous Japanese short-grain rice that had been combined with shiitake mushrooms, dried shrimp, onion, celery, water chestnuts and dried Chinese sausage. Even though the family is now spread across the country, Clough, who lives in the D.C. area, says that every one of their Thanksgiving tables will feature some version of this sticky-rice stuffing (recipe here).

It is frequently said that the best part of Thanksgiving is the leftovers—and for those of us who’ve lived or traveled abroad for significant periods, the morning after Thanksgiving has become an occasion to innovate. Not your plain old turkey sandwiches for us!

Some years ago on the Displaced Nation, I reported I’d created a dish for turkey leftovers: chirashi-turkey-zushi, inspired by my second displacement (in Tokyo). Basically you substitute turkey pieces for the raw fish.

This year I noticed that Stephanie of i am a food blog provides a recipe for turkey curry udon, which, in addition to providing a quick and satisfying way to use turkey leftovers is also “guaranteed to take you straight into the streets of Tokyo, at least in your mind,” she writes.

The story itself keeps getting rewritten

Just as fairy tales need updating for a new generation, so too does the Thanksgiving story.

New York-based writer Robert Sullivan recently produced a piece for Vogue on a group of six indigenous chefs, members of tribes from around North America. They met together in New York for the first time during Thanksgiving week to launch a new indigenous activist group, called the I-Collective, a kind of platform to showcase Native American food. On Thanksgiving evening itself, they hosted a dinner with some of their dishes. In effect, Sullivan says, they were rewriting Thanksgiving history.

They weren’t the only professional cooks doing something creative. Chef José Andrés, a displaced Spaniard (he recently became an American citizen), spent the weeks before Thanksgiving mobilizing a massive team of chefs and volunteers in Puerto Rico to produce 30,000+ Thanksgiving meals—”what may be the island’s biggest-ever Thanksgiving dinner”—for those displaced by Hurricane Maria.

Thanksgiving, after all, should belong to the chefs—and the fact that some of them are joining the national conversation about the meaning of this holiday of the displaced, bodes well for its future. While there will always be those of us—for instance, the Vietnamese American novelist Viet Thanh Nguyen—with misgivings about celebrating displacement, maybe the best, the only(?) solution is simply to make the party bigger? 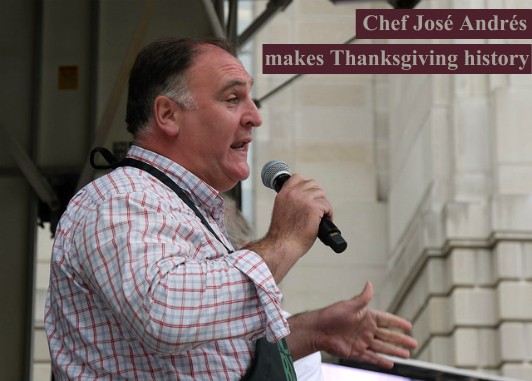 ML Awanohara, one of the Displaced Nation’s founders and its current editor, often composes pieces of this kind for the biweekly Displaced Dispatch. In fact she will be doing something on a related theme for the upcoming issue. Why not subscribe and brighten up your global creative life every couple of weeks?