THE ACCIDENTAL EXPAT: A privileged and always fascinating life in the Middle East

2 Comments Posted by The Displaced Nation Team on April 21, 2016

Today we welcome a new columnist, Indra Chopra, to the Displaced Nation. Born in India, Indra embraced the life of a trailing spouse as the means to become an international creative, as she will explain. —ML Awanohara

Growing up, I fantasized about being an expat one day. In the words of travel writer Pico Iyer:

“…travel is, deep down, about the real confirmation of very unreal dreams.”

My early dreams were about becoming a successful novelist/journalist/writer, of traveling the world and penning my thoughts. I must have inherited my wanderlust from my father—he’d traveled to Europe by the P&O liner in 1959,

By the time I was born, my family had settled in the sleepy, but culturally and politically rich, town of Allahabad, on the banks of River Ganges. Ours was a business family, which necessitated staying in one place and one residence, a family property. I envied my friends whose fathers had transferrable jobs, moving to different cities, within India or abroad.

The solution was to immerse myself in books, no limits on genre, waiting for the day when I, too, could have the world in the palm of my hand.

A couple in a rush

My opportunity for travel came with marriage (1978), when I took up residence in New Delhi. My husband and I covered the length and breadth of India and Nepal in the first year of our marriage; we were dubbed a “couple in rush”.

Looking back, I feel nostalgic for those lazy, somnolent train travels of the 1980s. Yes, the stations were often grimy and the train washrooms unhygienic, but it was so much more romantic than our later air travels. Flying somehow negates the mesmerising sheen of the unknown.

With the arrival of children, my travels became less frequent. Long journeys were replaced by vacation travels to surrounding hill stations and family outings to my hometown.

The family that lived in a shoe

But then the chance to live as an expat came when my husband accepted a five-year assignment in Muscat, Sultanate of Oman, an unknown land in the Middle East. I had no qualms about becoming a “trailing spouse”—a term that was coined in 1981 by the Wall Street Journal’s Mary Bralove. By that time I had already opted out of full-time journalism for a life of freelance writing, reading, and exploring with friends.

Oman was an unknown, shoe-shaped land; our son, then six years old, told us he refused to live in a shoe, probably thinking about the “Old Woman Who Lived In s Shoe”.

The country was a challenge—ironically because of its similarities to India, which were facilitated by the historically close ties between Oman and India. Indeed, India and Oman have had trade and people-to-people ties for several millennia, and Oman had “one foot in India” (to continue the shoe analogy) during British rule in the subcontinent. Today Oman is home to a large Indian expatriate community and counts India as an important trading partner.

Muscat was an enclosed city with no main street—just a maze of narrow winding alleys leading to a central compound with heavy wooden gates that would be closed at night, about three hours after sunset. Only authorized vehicles were allowed and pedestrians were let in through a small door in the main gate. Until 1970, when the current Sultan became ruler of Oman, after the gates were closed, you had to carry a lantern to light your face or you would not be allowed in.

The discovery of oil in the 1980s had led to economic progress and modernization. Today’s Oman is a fast paced, stable and peaceful country under a benevolent Sultan.

A life of luxury… 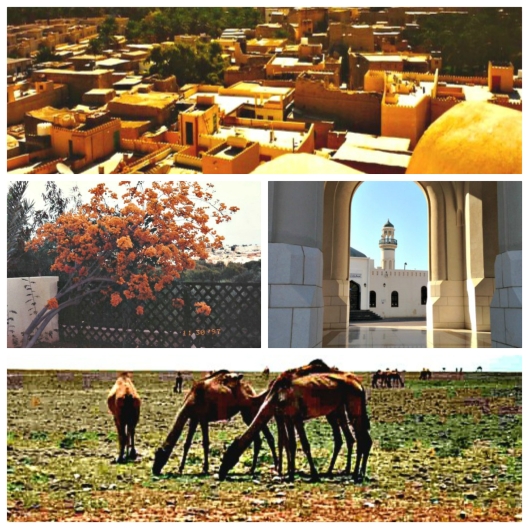 My husband’s position as general manager of his company—he was also on the Management Committee of the Indian School in Muscat—afforded us all the luxuries and privileges the city had to offer.

School holidays took us to Dubai, Abu Dhabi, and Cyprus; we also traveled within Oman while my husband jetted off to USA, Europe and the Far East on work. Life was on an even keel. Our daughter finished high school and left for the USA, to attend college in Massachusetts, and our son followed four years later when he was accepted to Purdue University.

When I wasn’t traveling, I spent my time in libraries pouring over books, reading about Oman and its close ties with India. In my free time, I would walk the souks and the lanes, the beaches and restaurants and parks, meeting with other expats and reveling in the cultural life, especially concerts and art exhibitions.

I took a freelance writing assignment with the English-language daily Khaleej Times (Dubai), and this opened up opportunities to meet with Omanis. I found the women friendly, but as with Eastern men, they kept a respectful distance. I was both intrigued and impressed at how they managed their restrictions and found work opportunities. Though women did wear the abaya and covered their heads, it was not a purdah nation, where women are physically segregated. They enjoyed the freedom to work and to drive. Also, being the first or fourth wife did not frighten them as I gauged after my conversation with a young girl soon to be the fourth wife of a rich man: she said she was looking forward to enjoying a life of luxury. (There must be other sides to the story.)

The five years we spent in Oman, 1995–2000, were a period of change for our family. Our daughter finished high school and left for the USA, to attend college in Massachusetts, and our son followed four years later when he was accepted to Purdue University.

When my husband and I at last returned to India, we were empty nesters starting anew, as well as repats hoping for another expat assignment.

Thank you, Indra, for sharing your story. We look forward to hearing the next installment. Where did you accidentally go next? —ML Awanohara

Indra Chopra is a writer/blogger passionate about travel and curious about cultures and people. Her present status is that of an accidental expat writing to relive moments in countries wherever she sets home with her husband. With over twenty years of writing experience Indra has contributed to Indian, Middle Eastern publications and online media. She blogs at TravTrails.

Photo credits: Photos of India and Oman are from Indra’s collection or from Pixabay.

2 responses to “THE ACCIDENTAL EXPAT: A privileged and always fascinating life in the Middle East”