LOCATION, LOCUTION: For Stephanie Patterson, the role of expat historical novelist seems to have been predestined

5 Comments Posted by The Displaced Nation Team on September 10, 2015

Columnist Lorraine Mace, aka Frances di Plino, is back with her latest interview guest.

Hello again, readers. Last month I introduced you to expat writer Oliver Tidy, who found his calling in writing crime novels set in the UK once he became an expat in Turkey. For my guest this month, Stephanie Patterson, it was the other way around. Stephanie developed an early passion for places other than her home country of Germany, and for the English and Scottish medieval periods. In other words, it seemed almost predestined that she would move to the UK and write historical novels set in these places and times.

Although Stephanie first lived in Kent when she arrived in the UK 18 years ago, she relocated to Aberdeen and then, after a stint in Wales (Cardiff), where she met her British husband, Laurence, has lived in Edinburgh for the past 10 years.

Not surprising, given her proclivities, Stephanie believes the key to settling into a new country is total immersion. In her case this technique greatly improved her grasp of the language (she is a certified translator of English to German). It has also enabled her to write romantic suspense and adventure set in Scotland, England and Normandy under the pen name of Cathie Dunn.

In 2011, Stephanie and Laurence set up Crooked Cat Publishing on the model of an independent US publisher. To date, Crooked Cat has published over eighty paperbacks and e-books with authors across the world, several of which have won (or been shortlisted for) prizes. It has quickly developed a reputation for producing quality fiction.

When she isn’t writing, editing or publishing, Stephanie is visiting castles, towns and cathedrals throughout the UK. A hobby historian, she has taken university modules in Tudor Studies and Scottish Studies. While in Wales, she took part in medieval re-enactment (the medieval and Jacobite eras being her favorites).

Stephanie’s love for medieval Norman history saw her back in Normandy for a holiday in July. Ultimately, she (and her husband) would not rule out moving to France one day, and, yes, she is currently studying French to improve her knowledge of language and culture.

Welcome, Stephanie, to the Displaced Nation. I think I can guess the answer but I’ll ask you anyway: which comes first, story or location?

Yes, as you probably guessed, I’m usually inspired by location and/or architecture first, which I then combine with potential plot ideas. My Scottish romance, Highland Arms, was born when I travelled through Glencoe and along the dramatic Loch Linnhe in the Scottish Highlands. The forbidding scenery (helped by the adverse weather of sleet, rain and fog) was the perfect setting for an adventure set in the 1720, featuring a smuggler. I always carry a notepad, and on that occasion I found it very useful for jotting down ideas. 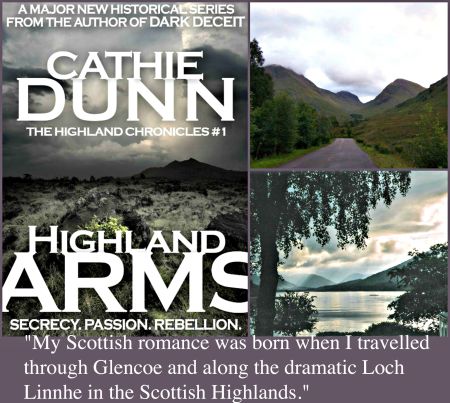 For Highland Arms, I was fortunate enough to find booklets by local historians about the era, which allowed me to paint a more realistic picture. This, in combination with a number of visits during different seasons, allowed me to set the scene quite realistically. I did the same for Dark Deceit, which is partly set in Gloucestershire and partly in Normandy. I took hundreds of photos during a holiday in Normandy and kept going back to my travel diary for pointers. I prefer to write about areas I’ve visited. If I can convey my own feelings and impressions, it helps create the atmosphere.

Is landscape the only feature you look at to create a sense of location? What about culture, or even food?

As I write historical adventures, I tend to focus on history and landscape. I found Normandy hugely inspiring for its medieval history and the buildings that have survived from that era. The castles and cathedrals paint a vivid picture of 12th-century life, and I try my best to capture it and convey it into my stories. As you mentioned, I consider myself a hobby historian and have bookshelves full of history tomes, in English and French. It helps that I love the culture.

Can you give a brief example of your work which illustrates place?

Here is a passage from Highland Arms:

Catriona nodded. “Thank you, Mr MacKinnon. I wasn’t looking forward to scaling those peaks.” Her gaze scanned the shimmering surface high up, so glaringly white against the deep blue morning sky. Hidden under layers of cloud the day before, the steep hillsides now presented themselves in all their dangerous glory. Stunned by the beauty yet relieved she did not have to cross them, Catriona smiled as she gazed across crags as sharp as a dagger’s edge.

Relaxing in the stillness of her surroundings, she was surprised at her own reaction. Instead of the misery that held her in its grasp for the last few weeks, a new sense flowed through her.

She shook her head in disbelief. What brought this on? The eerie stillness should unnerve her, but instead it calmed and steadied her. Taking a deep breath, she gave her mare a nudge with her heel. Perhaps this journey was going to be good for her after all. No longer banishment, but rather an escape. Perhaps even a fortunate escape.

By the time they reached a small settlement by the shore of Loch Linnhe, the sun had crossed its zenith. Melted snow, and the footfalls of men and horses, turned the ground into a muddy slush. A handful of cottages stood scattered along the path, their walls covered in a thick layer of mud to repel the winds. Smoke swirled through holes in the roofs, filling the air with the smell of peat.

Catriona took a deep breath, enjoying the dusky scent. While she waited for MacKinnon to return from a cottage he’d entered on their arrival, she nudged her mare to the water’s edge to let her drink. Her gaze roamed over the large loch, to the far shore and back to where a narrow arm of water branched off into Loch Leven, disappearing from sight between high peaks behind her. The rugged beauty pulled her in.

Though not always possible, I find it easier to describe a setting once I’ve visited it for long enough to develop a “feel” for the location. For Dark Deceit, I developed an impression of what life was like in that region during medieval times by exploring the abbeys in Caen and Falaise Castle, among other monuments from that era. The book’s hero is originally from a town called Mortagne, in today’s southern Normandy. During our holiday, we drove down to the town and had a wander through it. I took in the surrounding forests (which haven’t changed too much since the 1100s) and ignored the more modern aspects. I try my best to picture the landscapes as they might have been.

One of my favourite novels is Daphne du Maurier’s Jamaica Inn. The way she describes the desolate landscape, the remoteness of the location, is compelling. You have a real sense of being there. I also enjoy reading MM Kaye’s novels, mostly set in India and Africa. A Third Culture Kid (she was born in Simla and lived all over the world as an adult), Kaye evoked a sense of place that many other authors writing about those areas don’t manage in quite the same way.

Thanks so much, Stephanie!

Readers, any questions for the intrepid Stephanie Patterson? Please leave them in the comments below.

5 responses to “LOCATION, LOCUTION: For Stephanie Patterson, the role of expat historical novelist seems to have been predestined”