GLOBAL FOOD GOSSIP: I lost my heart (but not my teeth) to the French artichoke 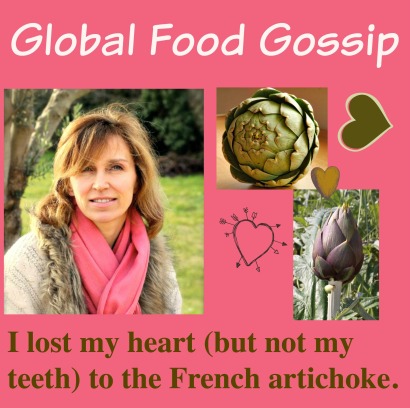 Joanna Masters-Maggs was displaced from her native England 17 years ago, and has since attempted to re-place herself in the USA, Holland, Brazil, Malaysia, Venezuela, Saudi Arabia, and now France. She describes herself as a “global food gossip”, saying: “I’ve always enjoyed cooking and trying out new recipes. Overseas, I am curious as to what people buy and from where. What is in the baskets of my fellow shoppers? What do they eat when they go home at night?”

“You can’t eat artichoke?” my dentist’s eyebrows lowered. “Something has to be done,” he declared, adding: “Don’t worry, the insurance will pay. In France we know that you can’t live life if you can’t eat an artichoke.”

It took a French dentist to understand that more important than a beautiful tooth, is a fully functional tooth, well able to withstand the demands of the artichoke, the most delectable of vegetables.

While out running a few years ago, I fell and broke my front teeth. Since then I had lived with two veneers, one of which never became my friend. Dreams about my teeth falling out came weekly and I never ate apples or baguettes unless first cut into bite-size pieces.

I could not, however, treat the artichoke with the same level of circumspection. I simply found it too interesting. Upon my arrival in the South of France, I threw caution to the winds—and then paid the price. 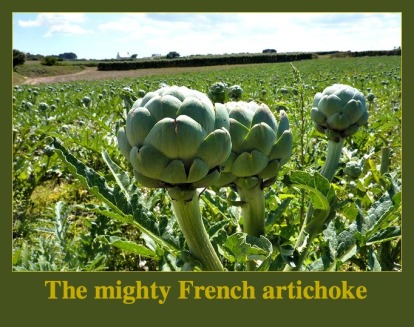 Artichokes springing up in a French field. Near Kerlouan – Artichokes, by muffin via Flickr  (CC BY 2.0).

As those who are acquainted with this exquisite food ritual will know, artichoke eating requires you to scrape the flesh from the leaves by gripping them between your teeth and pulling. The inevitable happened and that veneer bailed on me—twice.

Had I been living elsewhere, I suspect the insurance companies would not have been looked on the prospect of my leading a desolately artichoke-free life with much sympathy—in any event, not to the point of covering the payment for a new fixture. But heureusement, as I found myself in France, I was soon the proud possessor of a tooth not only of great beauty but also of unsurpassed shearing ability. It was May, and the prospect of enjoying June and July’s premium artichoke season was just around the corner. I was ready to make up for lost time.

“Je t’aime bien!” I declared with uncontrolled delight as I held up the mirror to my new smile.

We cackled with delight.

(The joke was not entirely appropriate as the idiom describes one who falls in love all the time so it becomes meaningless—a leaf for everyone you see.)

No matter. I will have life-long good feeling for the dentist who set me loose on the vegetation of Provence. Besides, what other idiom could he possibly have used in the circumstance?

The variety of artichokes available in the South of France surprised me at first. 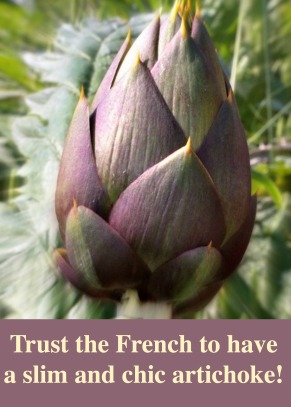 Slim and chic. Artichoke, by Marco Bernadini via Flickr (CC BY 2.0).

Not only do you find the large and familiar green globe type but also the longer, oval types. Trust the French to have a slim and chic artichoke, too!

The colours vary from the usual green to the deepest of violets and are sold in large bunches—I can imagine them being served at the wedding of a dedicated vegan bride.

The French like to eat artichokes boiled in salted water with vinaigrette dressing. Simple and perfect, though I must admit, I sometimes prefer to make homemade mayonnaise. After all, I am dealing with vegetable royalty. Surely I owe them a little effort?

Dealing with an artichoke can cause some worry, but the rules are pretty straightforward.

Method
Cut the tips of the leaves off with a pair of scissors to remove any sharp or dry bits.

Lower the artichoke into a pan of salted water and cook uncovered until you can easily pull a leaf from the whole. This can take anything between 20 and 40 minutes, depending on size. NOTE: Just remember not to place a lid on the pan. There are acids in the artichoke, which, if prevented from escaping in the steam, turns them brown. We simply don’t want that!

Next, drain the pan and let the feast begin.

The artichoke offers tactile eating at its glorious best:

Simply pull a leaf away, dip into your preferred sauce, place between your front teeth and apply gentle pressure as you pull forward, stripping the “meat” from the leaf. (While you’re at it, reflect on the pleasure of knowing that one of your front teeth is unlikely to be dislodged—as you never know what’s around the next corner.)

Discard any woody remnants and move on. Soon you will find a greedy rhythm that makes conversation unnecessary.

As you reach the centre, the leaves become smaller and yield less.

Pretty soon it will be time to strip away the leaves and reveal the silkily haired “choke”—which you definitely don’t want to eat!

Comb away at this choke with your fork until the hairs lift up like poorly rooted weeds. Slowly the heart is revealed, cup-like in shape and richly creamy in colour.

You have now arrived in vegetable heaven!

The rich yet raunchy artichoke “keeps on giving” 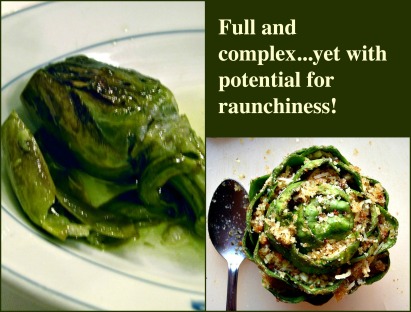 The delicate, buttery nuttiness makes the artichaut one class act. Yet it is far from bland. It has a full and complex flavor that richly fills the mouth.

Indeed, the artichoke is the culinary equivalent of the sophisticated French lady, dressed in natural-coloured linens with caramel-highlighted hair and warmly tanned skin.

If the flavor doesn’t shout for attention with overt showiness or any trace of vulgarity, don’t think it’s a pushover. The artichoke still has potential for a bit of raunchiness. It can provide a base for stronger flavours, as with recipes for stuffed artichokes, which often involve garlic, cheese and oregano.

And why not? Even Kate Middleton has been known to channel the sexy on occasion. However, it is her tasteful and demure style that best defines her—just as it does my beloved artichoke.

Finally, I’d like to make a confession. I love drinking wine; the worst thing about it is that it doesn’t even need to be great wine. Sometimes I worry about this, but then I just get on with things.

That said, I’ve discovered that wine just doesn’t go that well with artichokes. Something about this vegetable—its sweet, rounded taste—changes the taste of anything you drink.

But what’s interesting is that it changes the taste of water, too; it makes it sweet. I honestly believe that water is the best accompaniment to this vegetable.

What joy, a healthy, vitamin-loaded lunch, which feels like a decadent treat—yet I am not even tempted to consider just one glass of wine.

If you don’t already love the artichoke, I urge you to give it a chance. It’s the vegetable that just keeps giving.  😀

Readers, we invite you to continue the food gossip! In your humble opinion, is it worth fixing your teeth veneers to eat artichoke? Have you ever “fallen” for a vegetable in this way in the country where you live? Be sure to let us know in the comments!

Cool Columns, Global Food Gossip Acquired tastes, France, Global Food Gossip, It's Food!, UK, What a Displaced World
← CULTURE SHOCK TOOLBOX: How to pry open your mind to new cultures—and keep them all sorted For this wanderlusting Californian for whom photography and travel are a perfect fit, a picture says… →

One response to “GLOBAL FOOD GOSSIP: I lost my heart (but not my teeth) to the French artichoke”