Leave a comment Posted by The Displaced Nation Team on August 1, 2013 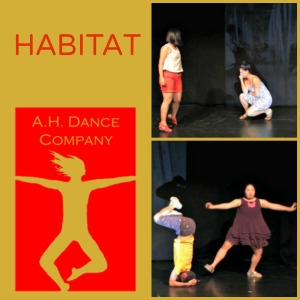 New columnist Elizabeth (Lisa) Liang continues her conversation with fellow TCK performing artist Alaine Handa. (Be sure to check out Part 1 if you haven’t already.)

Hi, everyone! Yesterday, I talked to Alaine Handa about her Third Culture Kid background and what led her to produce her first international touring show, Chameleon. Today we’ll finish up our Chameleon conversation and move on to talking about Alaine’s brand new show, Habitat, which is having its world premiere at the Edinburgh Fringe Festival. (If you happen to be in Edinburgh, scroll down to the bottom of this post for details.)

Welcome back, Alaine. I can relate to so much of what you said about Chameleon. The creative/rehearsal process can be so fulfilling that the performance itself is often the icing on the cake for the performer-creator. Whom did you have in mind for the wider audience?
As a proud TCK and Global Citizen, I felt the stories of TCKs needed to have a voice that supports all the research, books, blogs, and memoirs that have been written on our lives—yet can transcend boundaries of spoken language through dance and movement, something all cultures can understand. Perhaps my ideas were grandiose, but I really hoped that productions of Chameleon would touch the lives of all those who identify with living cross-culturally and existing as cultural mixes.

It sounds as though Chameleon provided a voice for a cross-section of nomadic, mixed-heritage, intercultural people, not to mention everyone who has ever felt unheard or unseen—which is everyone at some point in their lives. I did the same with Alien Citizen and am wondering if we should create a TCK festival for performing artists like us… But, back to you! How was the performance received?
Every single performance of Chameleon had at least one person in tears because they identified so much with it. After each performance, we spent quite a lot of time talking to audience members. I made a lot of new friends around the world!

Were there any surprises?
The biggest surprise for me came from the TCK student performance at Utahloy International School, in Guangzhou. The students were very receptive and open to sharing their TCK stories with me, as well as on stage. It brought tears to my eyes.

Did you learn anything about yourself in the process?
By telling my story and other TCK/CCK stories, not only did I come to understand myself better, but I also felt a strong sense of community among the globally mobile citizens of the world.

Act 3: Preparing a new show, Habitat, for the Edinburgh Fringe

And now you have a new show, Habitat. Is this your first time at the Edinburgh Fringe?
Yes! We are very excited. One of my dancers has performed in the Fringe before so he will be super helpful during the festival.

In your promotional materials for Habitat, you have the following statement:

Our personal space is the environment in which we confine ourselves to become our truest selves.

Can you explain?
As a TCK, I am constantly meeting people of different backgrounds, and I change my behavior and mannerisms accordingly. Thinking about this, I wanted to explore the transition to one’s personal habitat, where you can finally relax and just “be” who you are.

Who is the intended audience, and is it different than the audience from the one you had in mind for Chameleon?
This piece is more universal. It shows how different people from different backgrounds change the way they behave around others and when they are alone.

I see the cast is multicultural, with dancers from Singapore, USA, Portugal, and Indonesia. Was it a challenge to bring together a cast from so many different places?
To be honest, although it’s “easier” to label the cast by our passport countries, we are, in fact, a collection of multicultural individuals who have lived in different parts of the world at various times. Right now, two of us live in Singapore and the other two in New York. The biggest challenge we faced was rehearsing on separate continents, given the time difference. We relied heavily on email and YouTube, and later on Skype. As the choreographer, I faced the challenge of conveying what I wanted to see from the 2-D perspective of video. Slowly but surely, the show has come together piece by piece, like a jigsaw puzzle.

How did you find the other dancers?
I’ve worked with Laura on Chameleon and was working with her on the creation of draft material prior to my move back to Singapore last year. I met Ezekiel in Singapore; we both teach dance for the same company. Belinda and I are friends from New York; she and I met at an audition for a choreographer I danced for while living there. We found out that we trained with the same jazz dance instructor while I was growing up here in Singapore and took the same classes.

Are the other dancers also TCKs or “displaced” in some way?
I think I’m the only TCK, but of the other three cast members, two are expats and the other is bi-cultural, with both parents originating from different countries and cultures. I guess you could say we are a “displaced” group. I knew I wanted to work with a multicultural cast again because it made for such an interesting group dynamic with Chameleon—although in this case, the cast has not worked together before.

You’re now in Edinburgh. What’s it been like so far?
When we first arrived, we had about 20 hours of rehearsal (including tech and dress rehearsals). The pieces are gradually falling into place.

Do you have plans to take Habitat anywhere else?
Yes, we are encouraging theatre venue producers, programmers, agents, etc. to come see Habitat during the Fringe in hopes it can be produced in other venues around the world.

Where do you think the show will go next?
I’m not sure—I’d like to bring it down to Australia. I also really enjoyed Toronto Fringe a couple years ago and might bring Habitat there. We are also looking to get this show booked for different venues across Europe, Asia, and North America.

If you happen to be in Edinburgh, here are the details for Alaine’s show:

Habitat in Edinburgh Fringe Festival from Alaine Handa on Vimeo.

Questions for Alaine? Be sure to leave them in the comments section!

img: Video Stills by Kevin Tadge, taken from preview performances of Habitat at the Edinburgh Fringe (2013).