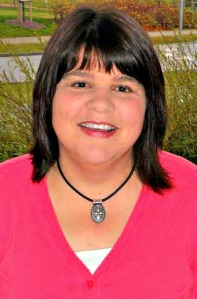 What made you give up California for Sweden?
My husband is Swedish. After working for five years at the California lab for a small pharmaceutical company, he really wanted to go back home. We started the process in 2003, and a couple of years later, in spring 2005, we finally made the move.

How did the pair of you meet?
He was working as a chemist in Sweden and the company transferred him to their lab in California. We met on a Yahoo message board — he was looking for people to meet in California before he moved. I had been online dating a bit, and when I saw his message I replied. We started to exchange e-mails, then letters and phone calls. After six months we met in real life. 🙂 We dated for a few months and got engaged soon after. We have been married for 12 years. We have no children but share of life with our seven-year-old border terrier named Jake.

What things about Sweden did he miss when living in your part of the world?
Besides his family and friends, he missed Swedish Christmas, Swedish candy, the country’s socialized health care, and its four seasons.

So now you’re displaced. Do you share that fate with anyone else in your immediate family?
No! I’m the only one in my family that lives between cultures.

You’re also job searching in a foreign land. Are jobs hard to come by in Sweden?
Without fluent Swedish, finding work is very hard, especially if you want something more than a temp job. I worked in the retail industry in the States. It took me six years to find a job in that field — and then I was laid off last spring.

Since so many Swedes speak better English than us native English speakers, companies will hire the Swede over the expat. That said, even without Swedish, expats who have good IT skills, a university education and are young may find more doors open to them in this market than someone of my background.

Since we live in Malmö, I’ve now extended my search across the Øresund Bridge, to Copenhagen, Denmark. The job market is better over there.

In March of this year you’ll have been in Sweden for eight years. When have you felt the most displaced?
When I first started learning Swedish — and was facing all the challenges that come with learning a new language. For a long time, I didn’t understand anything people were saying around me. And even now, after almost eight years of living here, I don’t feel like myself when attempting to speak the language.

When have you felt the least displaced?
When I became a citizen and went to the lunch for new immigrants, where I was given an official certificate saying that I’m SWEDISH!

You may bring one curiosity you’ve collected from the country where you’ve lived into The Displaced Nation. What’s in your suitcase?
Difficult… From Sweden I think I would bring this little book of Swedish verbs that I carry around since I always get the verb form wrong! 😉 From California — well, it’s impossible to pick just one thing as there’s so much of everything!

You are invited to prepare a meal for the Displaced Nation, based on your travels. What’s on the menu?
I’ll make you a casual dinner of pyttipanna, similar to bubble and squeak in the UK. It’s a dish made with fried potatoes, onions, and bell peppers. Sometimes you eat it with a fried egg. Most people put ketchup on it.

As you’re such a diligent student of the Swedish language, can you donate a Swedish word or expression to the Displaced Nation’s argot?
Actually, I’ll lend you two:
1) Fika — it refers to a taking a break with a coffee and an open-face sandwich or pastry. Most Swedish people have it once or twice a day. I think you would enjoy it.
2) Farthinder — that means speed bump. I love this word. It makes me laugh every time I see a signpost for one.

This month, we’ve been focusing on the need for mentors: people who teach us what we need to know, or remind us of things we have buried deep. Have you found discovered any new mentors, whether physically present or not, in your life abroad?
I have met people along the way that I would never have been friendly with in my old life in California. Living abroad has given me a new appreciation for people from other cultures whom I’ve gotten to know by having dinner with their families or joining in their celebrations. For instance, I have a friend from Iraq who has been wonderful to me when I was really struggling to fit in and get Sweden. She moved to Sweden with her kids in the 1990s.

If you had all the money and time in the world, what topic(s) would you choose to study in your adopted country?
Well, I’m already studying Swedish, but assuming I were fluent, I would study the history of Scandinavia. I would particularly like to learn more about the people who have come from other places to live in Sweden. How do they adjust to the life here? I love my adopted country but still find it a culture shock in many ways!

Which part of the culture is still shocking?
To be honest, I think it’s the Swedes themselves. Most Swedes are very reserved and it’s hard to befriend them. People don’t talk to each other on the bus or in shops. As a American I have always been very friendly and will chat up a stranger. But now I very rarely do it.

Readers — yay or nay for letting Maggie Eriksson into The Displaced Nation? True, she and her Swedish hubbie have a special chemistry, which must help to alleviate the symptoms of displacement — but could she have picked a more different place to live from California? Doubtful… (Note: It’s fine to vote “nay” as long as you couch your reasoning in terms we all — including Maggie — find amusing!)

STAY TUNED for tomorrow’s thought-provoking guest post by Andy Martin, comparing the forcibly displaced to those of us who’ve made the choice to be displaced.

Img: Maggie Eriksson outside her flat in Malmö, Sweden (October 2012).

Golden Oldies, Random Nomads Acquired tastes, California, Crosscultural marriage, Expat interviews, Moveable feasts, Pot Luck, Random Nomads, Southern California, Sweden, USA
← THE DISPLACED Q: With enough time and resources, what would you most like to learn in your adopted culture? Do refugees and migrants have anything in common with us expats? No, and yes… →