THE DISPLACED Q: In your world travels, which Olympics athletic skill would come in most handy? 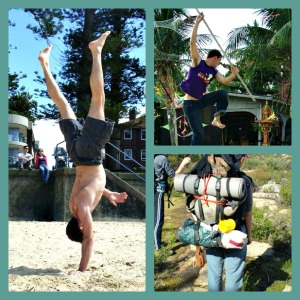 As I travel around, I often wonder what it would be like to be an Olympic-quality athlete. No, really! I do. I just LOVE the idea of pushing my body to extremes, of being all I can be.

I find it curious that the Dutch sprinter Fanny Blankers-Koen, who won four gold medals in 1948 — the last time the Summer Olympics were held in London — commented afterwards:

All I’ve done is run fast. I don’t see why people should make much fuss about that.

A humble sentiment, to be sure — but, hey, there’s something to be said for displaying your prowess at times.

The way I see it, the pursuit of excellence — in anything, from sprinting to eating a banana to waiting for a bus — should always be applauded. Why be average at anything when you can be great at it?

And if I haven’t managed it yet, that’s not for want of trying! Except in one area. Like many travelers and expats I know I find traveling rather thirsty work — and have developed the skill of lifting a pint, or a large gin and tonic, with the best of them!

But with the London Games soon upon us, I keep imagining all the Olympic-champion-level skills that would come in handy for your average traveler, if only we could enhance our bodies in certain ways.

As a powerful cyclist, you could transport yourself the length of a continent without ever having to squeeze onto a chicken-infested bus.

That would help out when it came to backpacking – no need to ban your girlfriend from taking a hairdryer anymore! Just man up and shoulder the extra weight.

Did you know sailing was an Olympic sport? (It was actually known as yachting for its first 100 years…)

Top-notch sailing skills would not only make international crossings a pleasure, but you might also be able to pick up a bit of work here and there — maybe even end up crewing a mega-yacht for the rich and famous! (I know someone who is doing this job at the moment. He reports it’s quite enjoyable…)

For the life of me, I can’t figure out how diving or gymnastics could ever be useful. They’re just totally random skills that take a lifetime of effort to acquire and perfect, and are good for exactly two weeks in every four years, until you turn twenty and suddenly become too old. Well, I guess if you’re really lucky, you could launch a clothing label or a perfume brand to finance your travels.

Taekwondo and karate are both Olympic sports and both fiercely competitive (well, fierce when compared to, say, figure skating!).

Imagine the healthy glow of confidence you’d project strutting around the globe as one of the world’s top martial artists! Downtown in a strange city in the dead of night, you could nip out for a taco safe in the knowledge that any low-life waiting to mug you was about to get an education.

In all seriousness, though, I honestly believe that some self-defense training is essential for the modern traveler. Not so much because you might get a chance to use it, but just knowing some basic moves to defend yourself boosts your confidence a hundredfold. And people out to cause trouble can often tell this at a distance — just by watching the way you walk. They look for easy targets; if you don’t present one, you may never even know you were in danger.

This could be the all-time winner for us traveling types. Last in line for a ticket? Only one croissant left at the deli? Wrestle your way through!

Caught without enough money after living it up in a posh restaurant? Try skipping out. The maître d’ will never see it coming…

Of course, traveling with bottles and bottles of baby oil is going to present its own challenges — not least when customs wants to know exactly what it’s for. Then again…you could always show ’em!

Ah, the Olympic marathon — traditionally the last event of the athletics calendar, with a finish inside the Olympic stadium, often within hours of, or even incorporated into, the closing ceremonies.

I’ve always fancied myself as an endurance athlete, as a marathon runner — if I was ever in the right place long enough to train for it. That kind of endurance, the ability to not give up even when it becomes impossibly hard — that’s the Olympic-level skill I value the most.

Because, as I said, traveling can be hard. It can be grueling, unpleasant, dangerous and occasionally downright painful!

But as is so often the case in life, if you can just see past all that to the bigger picture — can take a step back from the hardship of the moment and find the strength and positivity to carry you through — you’ll be able to go the distance.

You’ll be the one still traveling when all the others give up and go home; the one who perseveres with the difficult language, makes new friends from scratch and/or manages to fully integrate into an unfamiliar culture.

And that’s where the real rewards come from, the traveler’s equivalent of winning gold: being able to appreciate what you’ve achieved in spite of all the obstacles that were placed in your way.

Because, no matter how competitive some of us world travelers are, the fact remains that travel is not a race. You are only really competing with yourself — trying to see how many life experiences you can assimilate and how far you can go towards achieving your dreams.

And more often than not in that quest, slow and steady is the way to go.

So what do YOU think? Which areas of athletic prowess would you prefer to master, and why? Any Olympic skill is fair game (hahaha). Let me know in the comments!

img: Chronicling Tony James Slater’s attempts to become a gymnast, a martial artist and a weightlifter of note.

2 responses to “THE DISPLACED Q: In your world travels, which Olympics athletic skill would come in most handy?”