We interrupt this Olympic broadcast…with breaking news about a travel book that’s going for free on Amazon! 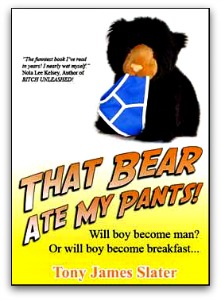 Now as some of you may know, Displaced Nation contributor Tony James Slater is also an author. What you don’t know (yet) is that for today and tomorrow — 17th & 18th July — his book will be available FREE to download from Amazon! Take it away, Tony! If anyone can sell us something, you can! Except in this case, we don’t even have to pay… 🙂

Hi there, folks! Yes, I’m here today to do a bit of shameless self-promotion. Can you ever forgive me? Listen, my book is called That Bear Ate My Pants. As the title suggests, it’s a ridiculous romp of a travel book, based in an animal refuge in Ecuador where I spent three months volunteering. (Some of you have already had a taste of these adventures from the first post I wrote for the Displaced Nation: “I traveled in search of adventure, and ended up embracing a simpler life.”)

To say that working for an Ecuadorian animal shelter was a struggle is an understatement. To say it was a struggle to stay alive — and avoid being eaten by bears and other exotic animals — well, that’s a little closer to the truth…hence the book’s rather provocative title!

Writing a book has often been likened to a Herculean task (usually by the author responsible, who inevitably believes himself to be unappreciated!)

Well, this one — my first — took me six years to complete. Not because the level of effort needed to write it was greater than for any other book; rather, because  — to continue the Olympic analogy — I’m an exceptionally lazy athlete. I’m pretty much guaranteed to come last, but then, nice guys usually do. 🙂

In fact, the only thing remotely Olympian about this book is the number of free downloads it’s had! In one sense, new authors and budding athletes are exactly alike: we all REALLY care about are our stats! My book has only been available for free on Amazon once before, in February, and there were a staggering (if I say so myself) 22,701 copies downloaded in just two days! Needless to say, this earned the book a place right at the top of the charts, which is exactly here I’m hoping to send it today.

So without further ado, here is a brief excerpt from my adventures, to tempt you, and all of your travel-(and animal-)loving friends, to want to read more.

Excerpt from That Bear Ate My Pants!

“MONKEY!” I shouted, as a brown blur swung out of the cage and onto the path.

The chase was on.

He skipped away with incredible speed, dodging around the corner and heading for freedom as though he’d thought of nothing but this moment for years. I bolted after him, grabbing the edge of a cage to swing me round in hot pursuit. The monkey was a good way ahead of me, and far more maneuverable. But I was faster on the straight. I accelerated down the narrow corridor between enclosures, and was closing the distance between us when he reached the steps down to the main road through the farm. This was my chance — if he paused, if he found the stairs confusing, I’d be on him. But no. Being a monkey, he didn’t have much use for stairs. He just jumped.

He made the ten-foot leap to the ground with ease, landed on all fours, and scurried off down the road. Pounding along behind him I had less than a second to make the choice. If I slowed to negotiate the stairs even part of the way down, it would all be over. Once he reached the trees by the first bend in the road he’d be gone for good.

Time was up. I reached the top of the steps at a dead run and launched myself over the edge.

In the seconds I was airborne my entire life flashed before my eyes. I seemed to have spent a disproportionate amount of it chasing monkeys.

Somehow I landed on my feet, with bone-jarring force. I was only a step behind the monkey — my leap had taken me considerably further than his — but my body was moving too fast for my legs. I managed to push off with my feet at the same moment as I started to fall headlong on the ground. The result: I bounced forwards another metre, sailing high above the form of the fleeing monkey, then crashed to earth and flattened the fella.

The impact knocked the stuffing out of me. It temporarily turned the monkey two-dimensional. Pain shot through me. I felt like I’d fallen ten feet onto a small primate. For the monkey it must have been like being beaten around the head with a banana tree. For a split second neither of us could move.

He recovered quicker than I did. Amazingly he wriggled out from under me and leapt towards freedom, just as I, still lying prone, reached out with both arms and caught him.

Unfortunately I could only catch him around the middle. Which meant that while he wasn’t going anywhere, he wasn’t particularly happy about it.

In far less time than it takes to tell the monkey writhed around in my grasp and sank his fangs into my hand.

The monkey switched his attention to my other hand and bit down hard.

“Arrr!” I shrieked. I let go with the recently bitten hand, but I had no other options — I had to grab him again or lose him. As I tried to grab his neck he bit me again, puncturing the thick leather glove easily and scoring my vulnerable flesh. Again and again he bit down, faster than I could even register the damage.

I lay on my belly, flat out on the floor, both arms outstretched in front of me and both hands wrapped around a frantically flailing ball of teeth and rage. There was sod all I could do — without my hands free I couldn’t get to my feet, and without standing up I had no way of controlling the beast. It was not the first time I had the thought; what the hell was I doing in Ecuador?

So if you’re a Kindle owner (or want to be), head straight on over to Amazon and grab a copy while it’s free.
If you’d like to read a copy but don’t have a Kindle, here’s a link to the free software that allows you to read Kindle books on any PC or Mac, tablet or smartphone.  (Otherwise, I’m afraid you’ll have to wait for the paperback…)

And let me know what you think in the comments!

STAY TUNED for tomorrow’s installment in ML Awanohara’s new series, “Lessons from Two Small Islands.” NOTE: The post by Tony James Slater that was scheduled for today — a Displaced Q on the Olympics and nationalism — has been postponed to early August.

2 responses to “We interrupt this Olympic broadcast…with breaking news about a travel book that’s going for free on Amazon!”