2 Comments Posted by The Displaced Nation Team on April 13, 2012 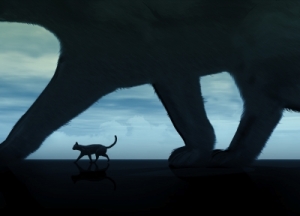 Not being superstitious myself, I tend to scoff at today’s date and treat it like any other. Then again, I once knew someone who had been involved in only two car accidents in her life, both of which occurred on Friday 13th. On a larger transportation scale, the ill-fated Apollo 13  launched at 13:13 (admittedly on April 11th) and exploded on April 13th. And a 1993 study found that the number of hospital admissions from traffic accidents were likely to be 52% higher on Friday 13th than on any other day.

That’s enough to make anyone superstitious about the date, so I won’t think too hard about the fact that, even as I type, my nearest and dearest is somewhere over the Atlantic ocean at 37,000 feet. Nevertheless, I’d like to hazard a guess that the increase in road accidents might be related to the increase in rosary beads and good luck charms hanging from rear view mirrors, thereby obscuring drivers’ visions.

The fear of Friday 13th is known variously as friggatriskaidekaphobia, triskaidekaphobia, and paraskevidekatriaphobia. (Too bad if you also suffer from sesquipedaliophobia.) While the combo of Friday and 13 as a double whammy of misfortune is a relatively new invention — the first English reference wasn’t until 1869 — Friday and 13 have always had a bad rap separately.

Think positively about that, all you triskaidekaphobics: instead of being fearful every seven or thirty days, at least the prophets of doom have streamlined the calendar so that now you need only live in terror for two or occasionally three days a year.

But take heart!  TDN, with its usual brand of helpfulness, is coming to the rescue of readers still cowering under their duvets and waiting for Saturday to arrive.

1. Travel to Spain or Greece.

But do it on a Wednesday. While Spanish-speaking countries consider Tuesday 13th to be unlucky, Greece considers Tuesdays in general to be unlucky. Travel on Wednesday, and you should have your bases covered.

Friday 17th is unlucky there. Unfortunately, due to the external influence of a dozen Jason movies, Friday 13th is now also seen as unlucky.

So if you’re the type to chuck salt over your shoulder while you’re having a bad day in the kitchen,  maybe you should stay away from Italy — mid-month, at least.

3. Take your mind off it — kiss someone.

Or maybe that’s why you’re still under the duvet? Yesterday, Twitter users decreed that Friday April 13th should be (Inter)National Kissing Day…even though the official date is nearly three months away on July 6th.

Today also happens to be the Tamil New Year,  Puthandu, which falls on either April 13th or 14th of the Gregorian calendar, and is celebrated by Tamils in Tamil Nadu, in Pondicherry in India, and by the Tamil population in Malaysia, Singapore, Reunion Island, and Mauritius.

Tamils mark the day with a feast, decorate their house entrances with kolams, while neem flowers and raw mangoes symbolize growth and prosperity.

If you’re not in any of those countries and you don’t normally celebrate this festival, maybe you should be less ambitious with your own preparations. Buy some mango sorbet.

5. Don your helmet and leathers and go biking.

PD13 is a big celebration for motorcyclists at Port Dover in Ontario, and has been held every Friday 13th since 1981.

If you’re not a biker, ride pillion with one who is. If nothing else, the insects smashing at high speed against your teeth will take your mind off the fact that it’s Friday 13th.

On Friday March 13, 2009, Isabel Zaleya of Suffolk County, New York, won a jackpot of $26 million after his friends urged him not to play the lottery that day…because of the date.

Release the Halloween decorations from the basement, and have a Halloween party in April. Come on — did you really need an excuse?

STAY TUNED for some reminiscing on Monday, when we look back at our top posts and themes from our first year.