Interesting celebrations around the world, as selected by Canada’s famed Dr Magister 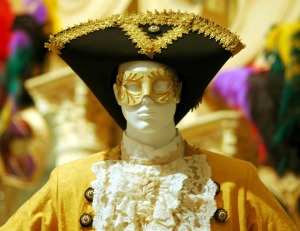 Continuing this month’s theme of celebrations, today’s post sees Dr Simon Magister, a social anthropologist and skateboarding enthusiast from British Columbia, select his most interesting and strangest celebrations from around the world. We haven’t verified Dr Magister’s research, but we’re pretty confident that he can be trusted.

Every March 13th on the island of Manus in Papua New Guinea, the members of the Tadel tribe celebrate Inspection Day. Being a “cargo” cult, this ceremony involves the chief of the tribe donning the ceremonial overalls of an aeronautical engineer and then conducting a two-hour safety check on the life-size straw replica of a plane that the tribe crafted. When the safety check has been completed, the tribe celebrates with roast hog served on in-flight meal trays whittled from wood.

2. The Festival of the Badger

A leading figure in the Celtic revival of the late-Victorian era, Amelia Mudd, established the Festival of the Badger in her home village of Eppingsop, Wiltshire. Now in its 125th year, and popular with adherents of Druidism, the festival, celebrated on the Spring Equinox, sees a giant wicker badger burnt on the village square. The success of the festival can be seen in the Wiltshire Tourist Board rebranding of the county as “the county of badgers.”

The residents of Parlor, Arizona probably weren’t expecting too many changes when they voted in mechanic Ted Bernard as the town’s mayor in 2008. Mayor Bernard, however, had other ideas, one of his first acts being to pass a town ordinance that the month of May was now to be known as “Bernardbury in Parlor.” During Bernardbury, downtown Parlor is host to numerous arts festivals. At Cafe Duvet people can enjoy the jazz festival (featuring Ted Bernard playing his saxophone), at Stern’s Movie House there’s the film festival (featuring exclusive footage Ted Bernard filmed on his flip) and at Claremont Green people can enjoy Shakespeare in the Park (featuring performances from the RSC, Steppenwolf Theatre Company, and Habima, the national theatre of Israel).

Whether Bernardbury continues when the mayor’s term ends in 2013 is, as yet, undetermined.

Each October 3rd the island of Vosha in Micronesia commemorates the end of the conflict known as the Battle of Joshua’s Chicken, which most historians now agree didn’t actually take place. The reason for the confusion lies in the published memoirs of Captain William Joshua of the Royal Navy, published in 1817. Joshua recounts how in the 1790s when traveling in the Pacific and in need of fresh produce as well as wood to make some minor repairs to his ship, he docked off the island of Vosha where he was cordially greeted by the island’s king. Joshua’s tale is that sick of all the breadfruit they’d been eating, the crew’s cook stole a chicken that belonged to the king,  and treated the crew to, according to Joshua’s memoirs, a “delicious, richly broth’d casserole.”

Unbeknown to the cook, the chicken was, in fact, the Voshaian’s living deity. Enraged at the death of their god, the people of Vosha engaged in a three-day struggle with the British. At the end of the three days Joshua surmised that the casualties on the Vosha’s side stood at six hundred, with their main settlement burnt down. Joshua then ends that chapter with the cook’s recipe for chicken casserole.

Most modern historians, however, feel that Joshua’s account has no basis in fact and that at no point did the people of Vosha ever worship a chicken. Professor Hopkins of Cornell has posited that Joshua’s memoir — where Joshua also alleges that he had been the lover of both George III and Catherine the Great — was the work of a man writing out delusions brought upon by the late-stage syphilis he must have been suffering from.

What strange celebrations have you seen? Dr Magister is curious to know for his research. From Rodeos to cheese-rolling…what did you think of them?

One response to “Interesting celebrations around the world, as selected by Canada’s famed Dr Magister”