Expats, here’s to developing your own New Year’s rituals, preferably with a displaced twist! 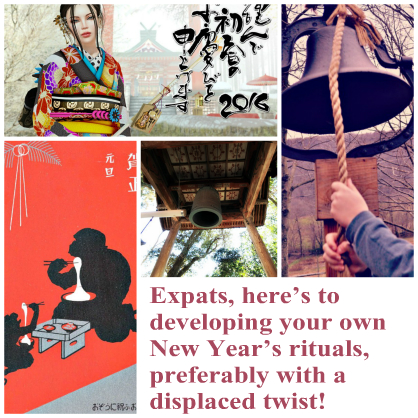 Hello, Displaced Nationers! It’s been a while since our last post—but not too late, I hope, to wish you a productive and creative 2016!

Though American, I lived in Japan for a long time, which means I’ll always be somewhat Japanized. One piece of evidence for this? To this day, I’m more geared up to celebrate New Year’s than Christmas.

During my time in Japan, I came to love the New Year’s (正月 Shōgatsu) season. It was a time when the nation collectively relaxed and was in a comparatively good mood. Everyone would eat special foods, make jolly pilgrimages to temples and shrines for good luck, and, once back at work, greet their colleagues with a wish for their continued support in the year ahead.

I participated in each and every one of these rituals with gusto.

A tradition that left me sound as a bell

As often as I could manage it, I would go to a temple, usually Zōjō-ji, on New Year’s Eve, where I particularly enjoyed the joya no kane: the tolling of the bells at midnight 108 times (according to Buddhist belief, this number corresponds to the number of evil desires that we suffer from on earth). 107 out of the 108 times are tolled in the old year (on New Year’s Eve), and the last one is to ring in the new year.

Bonshō (Buddhist bells) do not contain clappers but are struck from the outside, usually from a beam suspended on ropes. The sound is made up of three parts:
1) Clean, clear tone when the bell is struck initially.
2) Prolonged reverberation, lasting for up to ten seconds.
3) Resonance heard as the vibration of the bell dies away, which can last up to a minute.

JapanFilms has provided this short video of the Daimonsho (big bell) at the aforementioned Zōjō-ji, which should give you an idea:

The low tone and deep resonance enable the sound to carry over great distances. As I can attest, even when you don’t make it the temple for new year’s, you won’t miss the repeated tollings…and in some ways, being far from the madding crowds has even greater impact. The sound of the bells never failed to take me into a state of mind in which I could let go of the old and face the new.

Ah, that rings a bell!

Fast forward to the present. I am living in New York City, having repatriated to the United States some years ago. What do I do for new year’s here? Well, I’ve never once gone to see the ball drop in Times Square. The thought of watching a ball slide down in a pole in the midst of a crowd does nothing for me.

On the contrary, my instinct is to get as far away as possible.

Accordingly, this New Year’s Eve, my husband and I traveled north to a beautiful house near the town of Hudson, which we were renting through January 6th, aka Epiphany, Three Kings’ Day, or Twelfth Night, when Christmas officially ends.

And you’ll never guess what? The first thing I noticed when we got to the house was that it had an outdoor bell!!

And, no, I didn’t ring it 108 times, only once or twice, for old expat times’ sake. (The neighbors may have wondered what I was up to—but, hey, hey, we’re in the Year of the Monkey.)

The bell had a clapper, of course, which doesn’t produce the same richness of tone as its Japanese counterparts. But, even though my little bell-ringing ritual was a pale imitation of what goes on at Japan’s greatest temples this time of year, I was flooded with memories of new years past, spent in the Land of the Rising Sun.

At the same time, ringing that little American bell had an oddly therapeutic effect of clearing my head. Out with the old, in with the new!

No doubt the Japanese Buddhist monks would approve.

Literally ringing in the new year

That said, I wonder if we Westerners actually need Buddhism to understand the appeal (no pun intended!) of bell ringing. We may not ring bells any more on New Year’s Eve (we clink glasses and blow horns), but we continue to use the expression “ringing in” the new year. Where does this come from?

An 1850 poem by Alfred, Lord Tennyson suggests that bells could once have been involved in our new year’s customs:

Hmmm… I wonder if Japan’s bell-ringing custom, though as different as can be from the customs I grew up with in the United States, awakened in me some atavistic memory we Westerners possess of “happy bells,” which ring in better days for all?

But enough pontification. How about you—how did you spend new year’s? Did you come up with any new rituals, and if so, were they informed by your expat experiences? (If you’re looking for ideas, then I highly recommend outdoor bell ringing!)

ML Awanohara, one of the Displaced Nation’s founders and its current editor, often composes pieces of this kind for the weekly Displaced Dispatch. Why not subscribe for the new year?

Photo credits: (Clockwise from top left): Happy New Year!! by Ryo2014; “Ringing in the new year by going back in time,” by Virginia State Parks; Bell house, by Tanaka Juuyoh; and The Monkey Celebrating with Ozoni (from an unidentified series) of New Year’s cards, unknown artist, 1932, by electrons_fishgils. All photos via Flickr (CC BY 2.0), except first one, which is via Flickr (CC BY-SA 2.0).

2 responses to “Expats, here’s to developing your own New Year’s rituals, preferably with a displaced twist!”