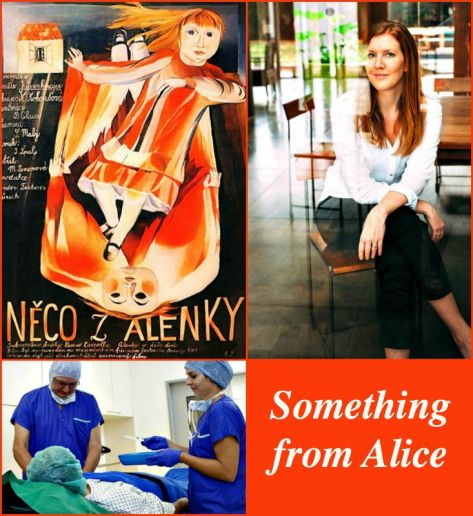 Welcome back to the Displaced Nation’s Wonderlanded series, being held in gratitude for Lewis Carroll’s Alice’s Adventures in Wonderland, which turns 150 this year and, despite this advanced age, continues to stimulate and reassure many of us who have chosen to lead international, displaced, “through the looking glass” lives.

This month we travel
d
o
w
n
the hole with Lene Fogelberg, a Swede who has lived in quite a few places but right now can be found in Jakarta, Indonesia.

With her long red hair and blue eyes, she looks a little like a Swedish Alice. What’s more, her biography of her early years is not dissimilar to that of Alice Liddell, the muse behind the Lewis Carroll story. Growing up in a small town by the sea, Lene was full of curiosity about the wider world and also in love with words. Describing her youth in a recent guest blog post, Lene says that for her,

written words danced lightly as feathers on the page. I loved to read and made weekly visits to our small town library, the bicycle ride home always wobbly with the heavy pile of books on the rack.

But while similarities are rife to Carroll’s Alice, the “wonderlanded” story Lene lived as an adult in fact comes closer to Czech director Jan Švankmajer’s surrealistic interpretation in his 1988 film, Něco z Alenky.

Něco z Alenky means “something from Alice,” and Lene ended up taking something from Alice’s story when, after moving to the United States with her husband and children, she found herself being wheeled through a rabbit warren of hospital rooms into an operating theatre. As in Švankmajer’s film, she was in a bizarre dream rather than a classic fairy tale.

Strangely, from the time she was young Lene had suspected there was something wrong with her heart. She even harbored a not-so-secret fear of dying young, trying to make the most of each moment. But Swedish doctors repeatedly dismissed her concerns, treating her like a hypochondriac.

And then, it happened: her worst nightmare came true. Shortly after arriving in America she went to have a physical so she could get an American driver’s license—and the American woman doctor informed her she had a congenital heart condition and only a week to live.

Lene survived two emergency open-heart surgeries to tell her story: quite literally! Her memoir (and first book), Beautiful Affliction, is out this week from She Writes Press. Until now, Lene had written in Swedish, mostly poetry, for which she has won some awards. But even though she chose to write her memoir in English, she retains her poetic style, as we will see later in the week when we publish a short book excerpt.

But before that happens, let’s have Lene will take us down into her rather harrowing rabbit hole. True, she’s had some reprieve since since recovering from her surgeries and moving to Jakarta—but only some, as Jakarta is the kind of place where you have to take your life into your own hands to cross the street. But I’m getting ahead of the story—over to Lene!

Lene Fogelberg: Thank you, ML, and greetings, Displaced Nation readers. Just to give you a little more of my background: I grew up in the south of Sweden, in a small town by the ocean. As ML says, I often stood looking out over the ocean following the waves in my imagination, wondering about all the exciting places in this world. In my youth I spent a couple of summers in France studying French and falling in love with this beautiful country.

As newlyweds my husband and I moved to Germany as students for a year, where I learned the language and took care of our newborn baby (just three months old when we arrived). After Germany, we moved back to Sweden and stayed there until my husband’s employer offered him a position in the United States. We moved to a small town outside of Philadelphia, called Radnor. That became the scene of my life-threatening health crisis. How it erupted and played out is the topic of my book, which, as ML mentioned, came out this week.

We spent a year and a half in the United States in total and then moved back to Sweden for a couple of years. Nearly four years ago we relocated to Jakarta, but in December we will be moving again: to Kuala Lumpur, Malaysia.

“Stop this moment, I tell you!” But [Alice] went on all the same, shedding gallons of tears…

After moving to the US there was a huge pool of tears because of the drama that unfolded in the weeks following the transition. My husband and I had to have physicals prior to getting our American driver’s licenses, and as soon as the doctor put the stethoscope to my chest she reacted to the sound of my heart. It turned out I had a fatal congenital heart disease and that I’d lived longer with this disease than anyone the US doctors had ever met.

As Lene attests in her newly published memoir, her “rabbit-hole” experience was full of heart, tears and physical drama. Photo credits (clockwise from top left): Front and back cover art for Lene’s book (supplied); Alice’s Adventures in Wonderland illustration by Milo Winter (1916), via Wikimedia Commons; The White Rabbit’s House, by Kurt Bauschardt via Flickr (CC BY-SA 2.0).

[S]he felt a little nervous about this; “for it might end, you know,’ said Alice to herself, ‘in my going out altogether, like a candle. I wonder what I should be like then?”

The events that unfolded are covered in my book Beautiful Affliction, which is a crazy story, full of heart and physical drama, not unlike Alice’s own confrontations with her changing body.

“Where should I go?” –Alice. “That depends on where you want to end up.” –The Cheshire Cat

Although my physical crisis was great, Jakarta has been one of the biggest challenges in a “wonderland” sense. The city is chaotic, with heavy traffic that is always jammed, making it difficult to navigate. I was shell-shocked for the first six months.

“Oh, I beg your pardon!” [Alice] exclaimed in a tone of great dismay…

Here in Jakarta where the population is mostly Muslim I try not to show too much skin. I wear clothes with sleeves and never skirts shorter than the knees.

“Well, then,” the Cat went on, “you see, a dog growls when it’s angry and wags its tail when it’s pleased. Now I growl when I’m pleased, and wag my tail when I’m angry.”

Greeting people here in Indonesia can be a minefield. The safest bet is to put my hands together and say, “Namaste.”

“There’s certainly too much pepper in that soup!” Alice said to herself, as well as she could for sneezing.

I love nasi goreng and all the Indonesian dishes—but without the chili, which is too spicy for me.

Photo credits: Nasi goreng (fried rice), by Tracy Hunter; (inset) Nothing is real, nibble and drink me…, by Wonderlane. Both images via Flickr (CC BY 2.0).

I would invite my family and friends from Sweden and serve all the delicious fruit that can be found here in Indonesia. I know how you can long for sunshine during the long, dark Swedish winters and I would love to give them all a vacation full of sunshine and fruit smoothies.

Photo credits: A Swedish Mad Hatter [my description], by Rodrigo Parás via Flickr (CC BY 2.0); Fruit stall in Bali, by Midori via Wikimedia Commons (CC BY 3.0).

“Well!” thought Alice to herself. “After such a fall as this, I shall think nothing of tumbling downstairs!”

I am getting more and more courageous. I guess living abroad gives me a sense of “I can do this” and when faced with challenges I can now say to myself: “You have been through worse.”

Stay busy so you don’t lose yourself to too much introspection. Especially if you are a traveling spouse coming with your expat partner. Make friends who can go with you to explore your new country. And whenever you go on excursions, try to learn the language so you can speak with locals and really get to know the country more than from a tourist’s point of view. The feeling of discovering gems of knowledge that are not in the tourist guides, like a local saying, is very rewarding and makes you feel connected to your new “home”.

My next writing project is a novel that takes place here in Jakarta. It is a hilarious and heart-breaking story where I combine the ancient myths of Java with modern society and where East meets West. The first draft is basically finished and I hope to follow up my debut book with this story. It is kind of crazy and sometimes I wonder why I am writing it, but I am in love with the characters so I keep going. It is very much a fruit of my “down the rabbit hole” feelings. I would say that most of my writing comes from a place deep inside where I feel like I have discovered something unsettling with the world we live in and, because I need to pinpoint it, I write about it, in an effort to grasp it.

Thank you, Lene! Being wonderlanded with you was a moving experience. I sense you are a very special person to have survived so much and still be full of curiosity about the world. Readers, please leave your responses to Lene’s story in the comments. And be sure to tune in later in the week when we feature a sample of her writing! ~ML

STAY TUNED for the next fab post: an example of how Lene writes about her wonderlanded experience.