WONDERLANDED: “Can you make me a Manhattan?” by A. Spaice

Drink a Manhattan at Eat Me in Bangkok. Photo credit: “Alice 15,” by AForestFrolic via Flickr (CC BY 2.0); Eat Me Restaurant, Bangkok; Manhattan cocktail via Pixabay.

A couple of days ago, we wonder-landed in Phnom Penh with serial expat writer, artist and sometime photographer A. Spaice. She told us falling down rabbit holes in Europe and Asia has sparked her imagination in untold ways—not least by convincing her that a Mad Hatter’s tea Party would not be complete without champagne and an opera singer.

Spaice ended her musings on the expat writer’s life on this fittingly dramatic note:

Knowing it’s the connection that I write for now, instead of the “art,” I’m moving into a different channel. I trust this current, because it feels good. It moves, it flows. Sometimes, when I’m lucky, it even likes to dance.

Today she offers a sample of her work that seeks to connect with others who have wonder-landed and lived to tell the story—whether in words, photos, or other forms of creative expression. It’s an except from her short book Bangkok, which she produced as a kind of roman à clef after taking a trip from her current home of Phnom Penh to the Thai capital. Bangkok marks the first in an unconventional short book series she is planning, titled n+1. 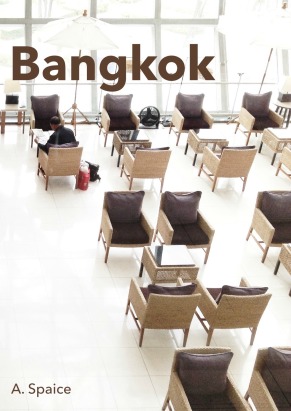 Cover art for Bangkok, by A. Spaice

The story principally concerns Karin Malhotra’s attempt to reconnect with an old female friend in Bangkok, Thailand, the Land of Smiles, only to discover they are no longer that compatible. But in this passage, Karin is about to meet someone new, another displaced creative, a magazine editor who has professed an interest in her work…

“CAN YOU MAKE ME A MANHATTAN?” I asked, truly wondering. “Of course.” This was supposed to be the best bar on this side of Bangkok, according to the gay couple that seemed like good people to ask the day before. I wanted a comfortable place. Not too conspicuous, not too loud. But I didn’t expect it to have the kind of name it did. Eat Me.

Still, the guy from the magazine had said “yes,” to meet me there. I muttered something about the name and how I’d heard about it from a bunch of people (two being a bunch) and thought it could work for a conversation space.

He was taller than I’d pictured, and seemed like he might have been French, because of the two-kiss thing that the Europeans like to do when they meet you for the first time. For some reason, he was extremely close to the lips on the second one, but that was kind of flattering, in a way, because he had a rich dark musty scent and I rather liked it.

At last? Hadn’t we just talked online like, twice? Business conversation making, that was the agenda today.

“Tell me about what you do.”

Oh, boy. Here it was. The test. I hadn’t really prepared for this. I was going to have to wing it. Really, at the end of the day, pretty much everything good that’s come to my life has come of winging it, I realized. With that thought in the forefront of my mind, I got into character. “I make space. I know that might sound odd, but I was meant to be an architect. Designing physical spaces with bricks and glass and maybe new materials but not concrete because in Kyoto I got a giant magazine with Tadao Ando teahouses all in these sad greys which got me depressed for a while because the ones they have in northern Thailand, Chiang Mai and stuff? They have these lovely bamboo colors and textures and earth tones. Which is better. Anyway, I didn’t become an architect for lots of reasons, the biggest one being that I don’t like projects that take more than three or four months to finish. With books, you know, you can take years to write books, but I got into eBooks and nothing more than like a two-hour read, you know? People like that. Short and sweet.”

“People like it because we are so time-poor right now. Modern people, that is. I’m talking about the malaise of the Western progressive world, where we have books and medicine but we have nothing to get happy about because our souls aren’t nourished properly in the time we’re growing up.

“What I’ve been doing, what I’ve just started since putting the brakes on my own design studio, which you’ll never believe this but is the second time I’ve done that. The first time I just felt compelled to do the same thing again, when we moved from Seattle to Durham NC. Durham is in North Carolina. Have you been there?”

“No. I rarely go to America. I can’t say that I’d ever want to live there, and visiting is a trial.”

“So you’re actually from…”

A bottle of Sauvignon blanc.

“Yes, I knew someone from your country once.” I stammered. I wanted to forget about that, but you can’t really forget about those ones you fall for at first sight. Why was I talking about that, though? That was weird. “He was a colleague.” A lie. But… so?

“Where did you work together?”

Shite. I was going to have to keep going with this one? “Oh, just a small firm in Tokyo. They did architecture, but had a base in Los Angeles. I thought I’d make it to Los Angeles because I knew my husband was big into the West Coast, drier air and all. But we wound up in Seattle. It took a while to get there from our time in Japan, though.”

“I love Japanese teas, they are the best.”

“I prefer Darjeeling to everything, personally. But I do love those whisks from those places they have in Kyoto.”

“Are your genetics from India?”

Wow. That was a first. No one put it that way before. Are my genetics from India?

“Yes,” I said. Not barking at them that I’m from the outskirts of Detroit. I hate the where-are-you-from question but I still ask other people, for some reason. I guess it’s habit? Smalltalk.

My bar companion brushed his dark brown hair with his hand, and I noticed that it had a few stray grays. This was interesting. When did I ever think men with gray hair could be attractive? This was news. Maybe it had something to do with turning almost-forty. A round number.

“I have never been to India,” said Glenn. He had a really long last name that I couldn’t pronounce, much less remember to spell. What was the custom in Austria when greeting someone? Was it two kisses like the French, or three like the Swiss? I tried to remember how it had been in those couple of weeks with

“But I intend to go. This winter, in fact.” Glenn was all business, and that reminded me to focus. Not on his hair and his hands and his blue eyes, so puzzlingly deep, but the agenda. “I have to get more writers from that part of the world.”

“Yes. We want to diversify the magazine. It’s far too European for its own good. I really want to bring in some new voices. From afar. From the East. That’s why I contacted you. You seem to have… an Indian-sounding name. I’m sorry… I guess I just assumed…”

“Oh, that’s fine,” I said, waving it away. The truth was it wasn’t fine. Why did my stupid name have to make me into an Indian person automatically? I’d been there enough times to know that the gender bias there is ridiculous and horrid and people aren’t nice within their families, especially to daughters. Goodness knows I’d put up with enough of that growing up with my mother. My complicit brother and father, standing by while she’d hurl psychological abuse upon stones. I hated thinking about those days, and pushed aside the thought as if it were one of Glenn’s locks. I had to stop myself from reaching out to touch his crown, to see if he might notice that kind of action. Just out of curiosity, I’d say, if he asked. Not trying to get with you or anything. Just like the look of you, and enjoy studying your features. High, strong cheekbones made him look a little feminine, but his hands were rough from, what? Magazine work couldn’t possibly be physical.

“Were you always in the publishing industry?”

He took a sip of a new drink that arrived, a tall slim glass that contained a mojito. Kind of a girly drink, wasn’t it?

The waiter came around and saved me. “Another drink?”

Readers, what did you make of this portion of A. Spaice’s expat-life story? Among other things, I think she has nailed the down-the-rabbit-hole feeling of no longer knowing who you really are or anyone else is, once you have wonder-landed.

Interested to read more of Bangkok? It’s available for purchase at Gumroad and Amazon.

2 responses to “WONDERLANDED: “Can you make me a Manhattan?” by A. Spaice”