Ten years after “Expat Harem,” foreign women will have another say on expat life in Turkey 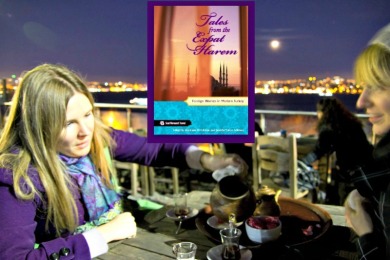 Tea in Gülhane Park, Istanbul, by William Neuheisel via Flickr (CC BY 2.0).

When the Displaced Nation first started, Anastasia Ashman, an American living in Istanbul, was running a blog tailored to the needs of the “thinking expat.”

It seemed almost too good to be true: a group of women who were passionate about telling stories that illustrated the impact of the expat life on a person’s psyche. Had Anastasia rubbed a magic lamp to conjure up a kind of foreign harem? After all, her site was called Expat+HAREM.

In fact, as we soon discovered, the core contributors to the site had also been contributors to a book Anastasia had co-edited with Jennifer Eaton Gokmen, Tales from the Expat Harem: Foreign Women in Modern Turkey, which came out in 2005.

Anastasia has since moved on from Turkey, the expat life and the Expat+HAREM project. As she reported in a post to the Displaced Nation three-and-a-half years ago, she and her Turkish husband traded Istanbul for her native San Francisco because they thought that life in America’s high-tech city would “more closely align with a future we want to live in.”

Yet the work she created on the basis of her Turkish expat life has lived on in her wake.

And now two American expats in Turkey, Rose Margaret (Rose) Deniz and Katherine (Katie) Belliel, have announced their intention to produce a kind of sequel to Expat Harem, which is scheduled to be published later this year, to coincide with its 10th anniversary.

The title of the new anthology will be Sofra: A Gathering of Foreign Voices Around the Turkish Table.

As that title suggests, we’re shifting metaphors: from the harem to food. But no need for me to go on any further as Katie and Rose are joining us today to discuss their plans for the new volume. (Note to female expats who have lived in Turkey for at least a year: the window for submissions closes on April 1st!)

Hi, Rose and Katie, and welcome to the Displaced Nation. Before we talk about your plans for a sequel, let’s go back to the original work. Katie, I understand that you contributed a story to Tales from the Expat Harem. What did you write about?

KATIE: “A heart-broken Michigan girl finds closure in Bursa at an ancient Ottoman bath, nurtured by her would-be Turkish sister-in-law.” This line that introduces my story in the book sums up my piece nicely. It is about how my first journey to Turkey was for love. My return was also for love—but not for my failed relationship. It’s the story of how I returned for closure, but stayed for my true love, Turkey the country. At least, that is what I hope people understand when they read my piece 😉

How about you, Rose? I believe you were active in the book’s companion blog and online community?

ROSE: I was a frequent writer for expat+HAREM, the companion site for the book (it was Anastasia Ashman’s brainchild). For example, I facilitated a roundtable discussion that included nine female cultural ambassadors from around the world, called Dialogue2010. It was a live conversation on art, culture, and hybrid identity inspired by my post to expat+HAREM called Mapping the Imagination. We sought to create a living definition of hybrid identity and how one’s worldview literally shifts as a result of location.

Am I right in surmising there was something very special about the Expat Harem experience?

KATIE: Being a part of Harem was an incredible experience from beginning to end. I knew I could trust the editors with my story; we had a wonderful relationship. They inspired confidence in me, and really gave me the courage to keep writing even well after Expat Harem was published. I also find that I keep going back to the book, as different stories speak up at different times in my life. Right now, as a mother, I am particularly drawn to Maria Orhon’s story about her daughter. Two years ago, when we bought our new house, Annie Prior Özsaraç’s story about their house problems gave me a much needed laugh amongst our then house troubles.

ROSE: I remember reading the book around the time I moved to Turkey. So many of the stories struck a chord, especially as I was getting my bearings those first few years. It made a big impression on me.

The Harem book features stories by expat women, and this new book you’re working on, Sofra: A Gathering of Foreign Voices around the Turkish Table, is likewise calling for female contributors. What’s the thinking behind the “women only” approach?

KATIE: Both Rose and I were heavily involved in the sisterhood of Expat Harem: all-female writing groups, entrepreneurial initiatives, and other spin-offs. It seemed natural for Sofra to be another book featuring women expat writers.

ROSE: Yes, as Sofra is following in the footsteps of Expat Harem, we thought it important to continue the tradition of honoring women writers.

But are men’s voices unwelcome?

KATIE: We mean no offense to the guys. I’m sure they have wonderful stories, which we hope to incorporate in the Expat Sofra community. In fact, we want to open Expat Sofra’s companion blog to expats from around the world, male and female. Stay tuned, as these plans are evolving.

I understand that sofra means “feast,” and you are proposing to make the new anthology at least partly about food. I’m curious: what was your own food journey like in Turkey? Did you take to the food right away?

KATIE: I was really hesitant about Turkish food at first, but then I just dove right in. Kind of like how I fell in love! There was no going back. There are still some things I just can’t eat or drink, like ayran (a milky yogurt drink) and kokoreç (intestines, usually lamb). I still try them on occasion, but they are just not for me! I have many favorites. Fresh figs are at the top—I look forward to fig season at the end of August/early September each year. Pazı, a kind of green, leafy chard, is my favorite vegetable, I eat it sauteed with onions and yogurt.

ROSE: Turkish cuisine is definitely a leap from the standard Midwestern fare of my native Wisconsin. I love cooking, though, and embraced the challenge of learning new dishes but adding a twist from my roots. My least favorite food experience would have to be the amount of service required when having guests over. It is more tiring at times than the meal! However, now I can say that my Turkish friends and family appreciate buffet style big meals at my house, and I don’t stress about every detail being perfect as I did in the past. My favorite food experiences are cooking with my friends and family. Nothing flavors my sofra better! Another thing I enjoy is sourcing my food locally. We get milk, butter, and eggs from our neighbors’ farm, and even turkey and chicken from time to time!

You are also conceiving of food as a metaphor for the expat life in Turkey, which can be sweet, bitter, tangy, or spicy. Regarding your own Turkey experience: what percent has been each of these taste sensations?

KATIE: Good question. I would argue that my experience here has been an equal part of all the tastes. There are beautiful and not-so-great parts of each flavor. But that is life, right? Even bitterness becomes a taste we crave if denied it for too long. So, I believe in appreciating the full flavor of whatever is put in front of me in the moment. Appreciating all parts of it for even if I don’t understand the taste then, I will understand it much later.

ROSE: Hmmm, I would say my life here has parts of each. Similar to motherhood, there are wonderful, sweet moments, and moments that are bitter. I would also add the combo of bittersweet to the mix! We are challenging our writers to pick one experience and match it with a flavor. You will have to wait until the book comes out to see which flavor I picked to portray.

On my one and only trip to Istanbul, I came away with a copy of the letters written by Lady Mary Wortley Montagu, wife of the British ambassador to the Ottoman Empire in the 18th century. As Anita Desai writes in the introduction, Although Lady Mary was well traveled,

it was Turkey and her first experience of a non-European, non-Christian civilization that provoked her most open and heart-felt admiration.

Do you see your book as having a further purpose of helping to explain Turkey to the West?

KATIE: I am currently re-reading Lady Mary Wortley Montagu’s The Turkish Embassy Letters. I read them before moving to Turkey. It’s nice to re-read them after living here for over a decade! Our book definitely seeks to show a different side of Turkey than is commonly portrayed by the media. What is the main thing every tourist says after their first visit here? “It’s not what I expected.” We want to show people a deeper, richer side of Turkey. In my opinion, the true side of Turkey.

ROSE: This region is still largely portrayed in a negative light. Expat Harem successfully challenged that by showing a different side, and we hope to continue that with Sofra. Not everything is positive, of course, we don’t want this book to be all cakes and flowers. We want to show a deeper side, an open portrayal of even bitter experiences that give lessons or show growth.

Who is the book’s primary audience?

KATIE: Our primary audience extends from the armchair traveler to the seasoned expat. The foodie to the culinary newbie. A little something for everyone, we hope.

Thank you, both. Talking so much about Turkish food has made me peckish. I look forward to seeing what you cook up in this new book. After our exchange, I’m anticipating a rich stew!

Readers, if this interview has piqued your curiosity about the Sofra anthology, or even if you simply wish to know how sofra is defined, I encourage you to visit the Expat Sofra site and/or follow the book’s progress on Twitter. And if you’re a woman who has had the pleasure of living (and eating!) in Turkey as an expat, then why not submit a piece to the new anthology? Only don’t forget, the deadline is coming soon: APRIL 1.

One response to “Ten years after “Expat Harem,” foreign women will have another say on expat life in Turkey”