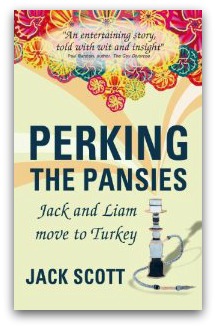 For some months, I’ve been a big fan of Jack Scott and his blog, Perking the Pansies. Judging by the readership numbers, I’m not the only one, but that’s unsurprising.  Apart from the fact that Jack is one of the nicest bloggers on the block, how could anyone not be enticed by his introduction?

Imagine, indeed. Even when it transpires that the Muslim country is Turkey and not Iran —

— newcomers to the blog can be forgiven for wondering, “Guys – what were you thinking?”

Thankfully, the imminent publication of Jack Scott’s memoir, Perking the Pansies — The Book, means that readers will no longer have to scroll through months of blog posts for the answer to that question. While the blog’s first post gives a brief account of how Jack and his husband Liam left London for Turkey, the book fleshes out the logistics in a far more satisfactory manner.

Most people “of a certain age” will identify with the events leading up to this dramatic change in lifestyle. A midlife crisis, a middle-aged realization that personal happiness and mental health are worth infinitely more than a big number in the bank account, plus a couple of pieces of golden luck to make it all happen – how many of us have dreamed of just this, to leave the rat race behind and live in our own little Paradise?

Naturally, it’s not as simple as that. In leaving the corporate rat race behind, Jack and Liam encountered a new one – the expat rat race. It doesn’t matter where you are an expat – if you’ve ever lived abroad among fellow countrymen with whom you have nothing in common except nationality, you will recognize the competitors in this race. Jack describes them in detail enough to make the reader wince in sympathy.

The truly awful landlady, Chrissy, would be one reason for many people to put their suitcases back in the taxi and return to the airport. A member of The Ignorati  —

“Those who live in utter ignorance of the history and culture of their foster land, shout loudly in English, and see the world at large through the narrow-minded pages of the Daily Mail”

— Chrissy, for me, conjured up the image of a younger Alison Steadman in full-on Mrs Bennet mode. (Later, when Jack likened a hideous expat soiree to “Abigail’s Party without Demis Roussos” I was thrilled to have my impressions confirmed.)

Another memorable character, Clement, I imagined as the likely product of a coupling between a James Bond villain and Noel Coward. Jack deliciously described him as:

“The dotty but loveable old maiden aunt who always pitched up at Christmas and drank all the sherry.”

While I could continue to reminisce about other people I met between the pages of PTP, I won’t. Suffice it to say that Perking The Pansies is not so much about Jack’s Adventures Through The Looking Glass, but more about Who He Found There – a refreshing change from the many memoirs whose authors are constantly center-stage.

Many readers will also recognize the doubts Jack had about his new life:

But eventually, when rid of the expat posse, Jack has this to say of Turkey and its own people:

“Turkey is a magical land graced by a rich culture, gorgeous people and an intrinsic love of the family. A respect for difference won’t destroy that. It’s okay to be queer….At times I think we’re floundering about like idiots, but now and then I think we’re making a real difference.”

Oh Jack — if only all your expat acquaintances could say the same thing.

I’m looking forward to your next book already.

Perking The Pansies by Jack Scott is available from Amazon.co,uk

STAY TUNED for tomorrow’s installment from our displaced fictional heroine, Libby, who is celebrating her mother-in-law’s departure before the holidays. (What, not keeping up with Libby? Read the first three episodes of her expat adventures.)

7 responses to “BOOK REVIEW: “Perking the Pansies — Jack and Liam move to Turkey,” by Jack Scott”