BOOK REVIEW: “The Globalisation of Love,” by Wendy Williams 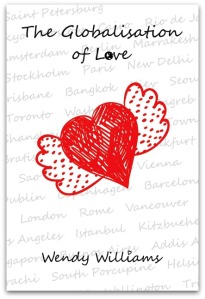 Writer Wendy Williams has described her new book, The Globalisation of Love, as being about “global love stories, inter-cultural romance and marriage.” A Canadian expat living with her Austrian husband in Vienna, it is of little surprise that Williams is interested in intercultural romances and her book could be best described as an expat take on the self-help, relationship genre — a Men Are from Mödling, Women Are from Vancouver, if you will.

That is certainly reflected in the readership of The Displaced Nation, where a large number of you, myself included, are involved in inter-cultural relationships or marriages so I imagine there are those among you or friends you know who may need this book with its advice and anecdotes on how to circumnavigate the occasionally choppy waters and discombobulating experiences of being, in Williams’s neologism, a GloLo couple. Williams explains the problems a GloLo couple may experience in dealing with parents-in-law, marriage ceremonies, immigration officials — all that “fun” stuff many of us have experienced.

Williams has a very conversational turn-of-phrase and peppers her book with references to romantic comedies, and I suspect her style will delight and grate in equal measure. Whether you find yourself charmed by the idea of a GloTini cocktail (recipe included in the book) is probably a fair indicator of whether you are going to curl up with The Globalisation of Love or hurl it across your living room.

With each topic tackled, Williams brings up case studies from a whole ranges of GloLo couples that she has interviewed. For me, this is undoubtably where the book is strongest as you find yourself either charmed or cringing at the experiences of each couple. Williams, also brings in the story of her own marriage, always in a disarmingly self-deprecating way, so at times The Globalisation of Love reads almost like a quasi-memoir.

I do think there are drawbacks. The over-classification of GloLo couples can quickly become confusing. At times I felt that I required some kind of chart to work out what sort of GloLo I’m defined under, though I suspect I probably snugly fit into what Williams classifies as “the scoffer.” The quick, breezy glossing over of the issue of mail-order brides did not sit comfortably with me, and I also thought the look at those who meet on the Internet was a missed opportunity. I’ve heard of a number of people who have found their partner via the Web — not through a dating site, but from regularly participating on a discussion forum centered around an area both partners have a common interest. This often involves those who previously wouldn’t have entered into a GloLo relationship, and perhaps have never once traveled out of their home country despite starting a relationship with someone on the other side of the globe.

While by no means a book that is going to radically change your opinion on self-help, relationship books, it is a worthwhile addition to the genre.

You can buy The Globalisation of Love here.

STAY TUNED for Monday’s post, a displaced Q about the Ideal Christmas Holiday.

Uncategorized Austria, Book reviews, Canada, Entrepreneurs, Wendy Williams, What a Displaced World, Writers we love
← BOOK REVIEW: “Perking the Pansies — Jack and Liam move to Turkey,” by Jack Scott DISPLACED Q: Where and how would you spend your ideal Christmas? →

9 responses to “BOOK REVIEW: “The Globalisation of Love,” by Wendy Williams”