LOCATION, LOCUTION: Liza Perrat on writing a location to life

1 Comment Posted by The Displaced Nation Team on September 19, 2013 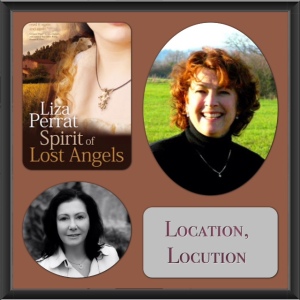 Liza grew up in Wollongong, Australia, where she worked as a general nurse and midwife for fifteen years. When she met her French husband on a Bangkok bus, she moved to France, where she has been living with her husband and three children for twenty years. She works part-time as a French-English medical translator.

Spirit of Lost Angels tells the story of Victoire Charpentier and her courage in facing injustice and abuse in revolutionary France. Wolfsangel (due out in November 2013) follows Victoire’s descendant, Celeste, who finds that under Nazi occupation, the personal is political.

Which comes first, story or location?
So far, for me, it has been location. I’m enthused, enthralled or nostalgic about a place, and want to use it as a backdrop around a story. In the case of my current novels, the location has become as much a character as the real-life ones.

How do you go about evoking the atmosphere of a place?
My novels are set in the French rural area in which I live, which makes it much easier to evoke atmosphere. I take loads of photos of the countryside, the people and the buildings, during each different season. The local historical association has lots of sketches and documents on what it looked like through the ages. As I walk the dog, I jot down descriptions of sunrises, sunsets, stormy light, fruit on the trees, snow on the hills, flowers in spring and the icy river in winter.

How well do you need to know the place before using it as a setting?
Intimately well. I’d have trouble creating a believable atmosphere if I’d not been to a place, or at least read widely on it.

Could you give a brief example from your work which you feel brings the location to life?
Many reviewers of Spirit of Lost Angels commented positively on the atmosphere created of La Salpêtrière asylum in Paris, during the late 1700s:

… I found the scenes of cruelty in the Salpêtrière Asylum painful to read – not because of the way in which they were written, but simply to have been shown such unpalatable truths …

The book vividly depicts the violent and inhumane methods doctors used to “treat” mental illness at Salpêtrière. To me, this was perhaps the most fascinating portion of the story- descriptions of the appalling conditions under which the women were kept, the rivalries that developed among cell mates, the rules one had to learn in order to survive this prison. The narrative was stark and believable and, believe it or not, educational. Since I’ve finished the book, I’ve been looking up the history of the Salpêtrière Hospital, intrigued at how low mental health care and the care of women had deteriorated at that time. Introducing an urge to learn more, dear readers, is the mark of excellent historical fiction.

Which writers do you admire for the way they use location?
Ones that come to mind:

Next month, my guest on Location, Locution will be Paulo Coelho, author of The Alchemist, The Devil and Miss Prym and Eleven Minutes

JJ Marsh grew up in Wales, Africa and the Middle East, where her curiosity for culture took root and triggered an urge to write. After living in Hong Kong, Nigeria, Dubai, Portugal and France, JJ finally settled in Switzerland, where she is currently halfway through her European crime series, set in compelling locations all over the continent and featuring detective inspector Beatrice Stubbs.

STAY TUNED for next week’s posts!

One response to “LOCATION, LOCUTION: Liza Perrat on writing a location to life”