EXPAT MOMENTS: A Question of Sport

As this summer, for me at least, has been a summer of sport, I thought I would continue this Expat Moments series with a post I originally put in 2010 on my own blog Culturally Discombobulated. They are thoughts I had while watching a San Francisco giants baseball game. That season the giants would go on to win the World Series, and the fans celebrating outside my apartment elicited a sound like that of a dying whale.

I’m in AT&T Park, San Francisco. It’s the top of the 4th innings and the San Francisco Giants trail the Arizona Diaomondbacks 6 – 1. It is little surprise therefore that the atmosphere in the stadium is tetchy. The main object of the crowd’s impatience is the Giant’s pitcher Barry Zito who to use a British expression is “having a ‘mare.” Even to me – a man who could write everything he knows about the art of pitching on the back of a postage stamp – it is apparent that Zito is a player struggling with confidence and that’s affecting his ability to settle into a rhythm. Within minutes of the game starting he had allowed Arizona to wrest the initiative. That disaster of a first innings would see Arizona score 6 quick runs – now they’re hoping to add more. Zito is in trouble again as he preps himself to pitch at Reynolds. Young has already walked and LaRoche hit a single. There’s an unpleasant air of expectancy in the ground as Zito pulls his left arm back readying himself to throw. It doesn’t feel as if the crowd expect much from this pitch – at least not heroics from Zito. There’s a palpable feeling of a crowd readying itself for disappointment, a collective anxiety over the failure they anticipate. Crack!! It’s a sweet hit from Reynolds. The crowd groans in anguish. Jesus, they knew it, they just knew it was going to happen. As the groan turns into boos, Young, LaRoche and Reynolds pass home plate. Arizona Diamondbacks 9 – San Francisco Giants 1. 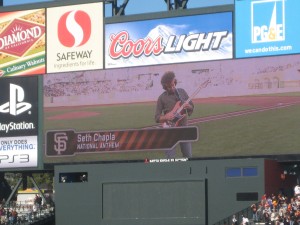 A few minutes later and Zito is “relieved”, to use a baseball term, by Ramirez, another of the Giants’ pitchers. Relieved: to free from anxiety, fear, pain – that sounds about right. Zito trudges off the field disappointed. Some of the crowd feel the need to make their feelings known. “You suck, Zito!!” Despite the anger of those shouting, as someone used to English soccer fans, the language the baseball fans employ is clean – unimaginative even. For me, I am disappointed that Zito is off. He is one of the few players I’d bothered to read about before the game and was vital in my attempt to try and pass as being vaguely knowledgable about the Giants. I feel disconnected from the rest of the crowd; alone in the communal. Various things have confused me. I don’t get why the National Anthem was performed by a guitarist who looks Will Ferrell done up as a generic rock star for an SNL sketch. I don’t get why the Giants came out to Radiohead’s Idoteque; surely the oddest choice of song to get 30,000 people pumped up? And then there’s the game itself, following it takes effort. Though I think of myself as a sports fan, this game is not my sporting heritage and mythology. I am having to start from scratch, learning new rules and new idols. Though some aspects of the game are familiar, for me it is still the Other, it is still foreign. I feel like a Christian pilgrim worshipping in a mosque. This feeling is made worse (or better) by the opportunity for contemplation and reflection that the game allows. It is in that respect that I find baseball most like cricket – quick bursts of action punctuated by long periods of anticipation, the moments where it pleases me to sit and think.

And as I think, I’m reminded of an old teacher of mine. He was American, first-generation. Possessing both an Ivy League and Oxbridge education he was smart, but not overbearing about it, and though now mature in his years he had the height and broad shoulders of a man who back in college must have made for a hell of a footballer. To my mind, he was like a character out of a Philip Roth novel. And here at AT&T Park, I am reminded of a conversation I once had with him, a conversation that hadn’t really registered much with me at the time, but now a few years later is striking a chord. Like so many American stories, it centres around a child’s grievances against their father. In this case, my teacher told me about how he had unfairly resented his immigrant father for not understanding or enjoying the same sports as he did. Unlike his friends’ fathers, his didn’t play catch with him in the backyard or explain the rules of baseball or football. When it came to sport they spoke different languages: the son spoke in the vernacular of the New World, of Red Sox and Yankees, of touchdowns and home runs; the accented father could only speak of the weird and unknown – of Dynamos and Red Stars. And so my teacher, as a boy, would observe his friends and their fathers and how they bonded over sport. Fathers teaching sons how best to catch, how best to bat. When they did this, they would mention how the Babe gripped the bat, how DiMaggio hit the ball, without knowing it they were passing down an ocular history of American sport, a sense of identity ever bit as important as tales of Washington or Lincoln. To my teacher’s young self, his father was failing in the very purpose a father was meant for. He wasn’t giving him this rites of passage that all the other fathers were giving their sons. Heck, if a father can’t show you how to throw a curveball, just what use is he? Today, I feel like that father. 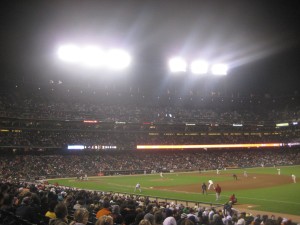 For me, dealing with sport in America is like having a whole idiom and vocabulary removed; I feel emasculated even. All those useless little facts and figures that I know about sport are useless here. No one knows of Dixie Dean or has an opinion on the relative merits of the Duke ball against the Kookaburra ball. Where once I was confident with the sports round in a pub quiz or in a game of trivia pursuit, it’s now my weakest subject and to be avoided at all costs. When a discussion turns to Roger Clemens or Brett Favre I have to Wikipedia them to remind myself just who they are and what sport they play. I try to learn a few facts so I have something that I can at least talk about. For this Giants game, by rote I have learnt the following: that the Giants were until 1957 the New York Giants after which they oved to San Francisco; that since leaving New York they have failed to add to their tally of five World Series; that game 3 of the 1989 World Series against local rivals Oakland Athletics was disrupted by the Loma Prieta earthquake; that Giants pitcher Barry Zito has a teddy bear collection and is the nephew of Dallas actor Patrick Duffy. But they’re just random facts that I have learnt, it’s not as if I have an opinion about any of these sports. And if you don’t have dumb sports opinions then it is difficult to connect with 90% of American males. What noticeable about my time here is that I’ve found that I don’t get along with American men as much as American women. Put a group of men together and talk quickly descends into discussing the minutiae of sport. When that happens I find I have little to say and so for the most part keep quiet.

I am going to try and change that. I often feel that I’m only in America when I step out of my apartment. Thanks to the web, my apartment remains de facto British soil where I can still listen to British radio, read the British papers and watch British sport. By that token, I remember coming across a photograph of Kim Philby; it had been taken late in his life when he was exiled in Moscow. Behind him, you could clearly see a bookshelf, and on the shelf where fat, yellow volumes of Wisden – the cricket lovers bible. That image has stuck with me. Though Philby had defected to the USSR and had betrayed his country, he still couldn’t escape the trappings of his Britishness – nor I guess did he have any intention of. I imagine Philby struggling to explain to his KGB handlers about just how important Test cricket is and resenting them for their indifference. And I’m guilty of that too, isolating myself culutrally from those around me. I need to make a concerted effort to change that and understand American sports better. With the baseball season getting to its interesting stage and the football season about to start, it seems an opportune time to make a greater effort to learn this new (for me) language though I will still, from time to time, talk of Dynamos and Red Stars.

STAY TUNED for Monday’s post where Kate will be reviewing a chocolate app.

2 responses to “EXPAT MOMENTS: A Question of Sport”