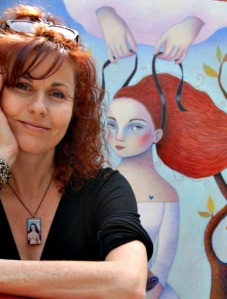 Place of birth: Bourgoin, France — a small town between Lyon and Grenoble.
Passport: France and now USA*
Overseas history: USA (New York City): 1990; USA (Los Angeles): 1991 – present.
Occupation: Artist and art instructor
Cyberspace coordinates: Isabelle Bryer Paintings (artist site and blog); Isabelle Bryer Paintings (Facebook page); and @IsaBryerArt (Twitter handle).
*I decided to become a US citizen after I had my first baby. Since she was an American, I thought it would be prudent to be a citizen, too — I’m not sure what I was afraid of! To this day, I can remember swearing allegiance to the American flag in a giant room full of 6,000 immigrants with the song “God Bless the USA” blasting through loudspeakers. It felt surreal but I found it hard not to get emotional with people crying all around me. Some of them had waited many, many years for this moment and were escaping countries where they had few rights and even less opportunities. It made me feel spoiled, coming from France and seeing this process simply as an administrative hurdle.

What made you leave your homeland in the first place?
I left because I couldn’t wait to start living my own life. In France I always felt “the daughter of” or “the sister of” (I have three older brothers). I felt that everything I was doing was dictated by what was expected of me by everyone else. When I arrived in New York, I felt as though I could reinvent myself. Of course my new identity was that of “the French girl” — but at least it felt exotic! I loved that everything was odd, new and exciting.

It took me three months to be able to speak English efficiently, and still I was constantly making mistakes! To this day, I make some mistakes, which never cease to make my husband and two kids laugh! Mainly, I put accents on the wrong part of some words — in French everything is pronounced “flat” with no emphasis on any particular syllable.

During that year in New York, I worked as a fashion consultant. I went back and forth between New York and Europe about five times within the year. I would visit European cities — Paris, Barcelona, Milan, Florence — and act as a “fashion spy,” taking photos and sketches of trendy designs that might inspire American designers. Then I would go back to NYC and compile everything in books that were sold to clothing manufacturers. The job was very badly paid, but it was way more exciting than my old life!

I met my husband when he was in New York on business. A few months later, I moved with him to Los Angeles.

So your husband is an American. Is anyone else in your immediate family “displaced”?
I was the first and only one of my family to leave my town. They all still live there, which is good because I can easily see everyone when I go for a visit.

Can you describe the moment when you felt the most displaced?
When I was living in New York, I was going home late from work by subway. There was a homeless guy in the car trying to eat his hand and screaming. It really terrified me, but I didn’t want to exit before my stop because I was afraid of I’d get lost in the wrong neighborhood. That was the moment when I realized “I’m definitely not in Bourgoin anymore!”

That said, I also remember walking alone down one of the avenues on the west side of New York on a sunny Sunday morning. I felt like a French country girl who’d been dropped in the middle of West Side Story. Everywhere I looked seemed like a movie set. I felt entirely displaced while also having the sense of floating on air. I just loved it.

Is there any particular moment that stands out as your “least displaced”?
When I’m alone and painting in my art studio, I have the feeling of being in the exact right place. I am not sure that I would have found in France what I was supposed to do in life. Sometimes you have to leave your familiar surroundings to start over and become who you were meant to be.

Can you describe the kind of art you do?
I guess the closest description might be “naive surrealism.” My work is very much inspired by folktales.

You may bring one curiosity you’ve collected from your adopted country into The Displaced Nation. What’s in your suitcase?
I’d like to carry in a couple of memories of curious times.

From New York: A night at the wild nightclub Copacabana. In the early 1990s it was the place to be: beautiful people, drag queens and transsexuals, with everyone dancing to disco music. You could see Madonna’s dancers practicing “voguing” in the back room. One night I also found myself starstruck — I was going down the stairs behind Iggy Pop.

From L.A.: A typical afternoon at my favorite place, Cafe Mimosa in Topanga Canyon, which I think must have been the birthplace of the peace and love culture. Mimosa is owned by Claire, also a French native. The most amazing crowds assemble there, making you feel as though you’re a character in a hippie revival play. It’s not uncommon to see barefoot people, a man with a huge cockatoo on his shoulder, another one carrying a baby goat. You might run into someone who wants to read your aura for free. The ads on the cafe’s bulletin board offer the services of horse or dog whisperers, dream interpreters, or people ready to loan you their herd of goat to mow your lawn in an environmentally friendly way. It is one of the best places in the world to sip your vanilla chai and people watch. I would love for you all to experience it.

You are invited to prepare one meal based on your travels for other members of The Displaced Nation. What’s on your menu?
Appetizer: Lemon rolls (spicy tuna on the inside, fresh tuna on the outside, topped with thin lemon slices and pine nuts in a delicious sauce) and Asian rolls from my favorite sushi place in LA, Kushiyu.
Main course: Baked sweet potatoes with marshmallows on top. Watching my mother-in-law serve this dish for the first time was an absolute culture shock. I couldn’t wait to call my family in France to tell them that these crazy Americans put rows of chamallows on top of sweet potatoes to bake in the oven and serve with turkey. To this day, I refuse to eat these baked sweet potatoes with meat but love to have them for dessert.
Dessert: A Galette des Rois that I would make myself. It’s a French cake made of puffed pastry stuffed with frangipane (a mix of sugar, almond powder and eggs). You hide little figurines of a queen and a king inside the galette before you serve it, and whoever finds one in their slice gets to wear a crown for the day. I have successfully introduced this tradition to my family and friends in the United States.

And now you may add a word or expression from the country where you live in to The Displaced Nation argot. What will you loan us?
One of the first expressions I learned when living in New York was “That’s how the cookie crumbles” — basically the American equivalent of “C’est la vie!”

This month we are looking at the concept of “la dolce vita” — by that we mean living with an open heart and soul, indulging in life with all your senses. Can you tell me about a recent instance when you felt you were living la dolce vita?
I remember floating on my back in my swimming pool on a perfect warm April morning, watching hummingbirds fluttering by (and also a few helicopters since it’s Los Angeles, after all!). Living in California is still exotic to me. I feel like I’m on a permanent vacation, which I love.

If you were to take the adult equivalent of a “gap year” now or in the near future, where would you go and what would you do?
If I could take a year off, I would take my family to visit a few far-away places like India, China and Japan. I would pack drawing pads and a digital camera and keep a record of all the beautiful things we encountered on our travels. I would use it for inspiration when back in my studio.

Readers — yay or nay for letting Isabelle Bryer into The Displaced Nation? Tell us your reasons. (Note: It’s fine to vote “nay” as long as you couch your reasoning in terms we all — including Isa — find amusing!)

STAY TUNED for tomorrow’s episode of “Libby’s Life”, with another bulletin from Kate — who seems to be regretting her rash promise to “stay with Libby for a while.” (What, not keeping up with Libby? Read the first three episodes of her expat adventures.)

img: Isabelle Bryer and four of her paintings.

6 responses to “RANDOM NOMAD: Isabelle Bryer, French Expat in the City of Angels”