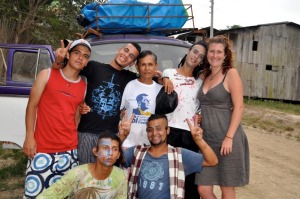 What made you leave your homeland in the first place?
I left, at 20, because I’d always had an itch. As a kid, I’d poured over National Geographics and Lonely Planets, plotting these exotic routes across strange lands. I think I imagined myself some kind of Lara Croft-type figure. Then I grew up and didn’t really know what I wanted to do with the rest of my life, so I boringly did what thousands of Australian 20-somethings do every year — took off to the UK for a couple of years.

Is anyone else in your immediate family displaced?
Dad’s displaced — in a jet-setting, corporate type of way. He always traveled a lot for work when I was young, domestically and internationally, and now he’s semi-retired and living most of the year in Italy. It’s handy, ‘cos now I have a great place to stay close to really good pizza and wine.

Describe the moment when you felt most displaced.
Waiting at the police station to report an alcoholic Latino ex for threatening to kill me, and having the cops not really care. I just thought in that moment, what I wouldn’t do to be back home, away from this machismo, in a place were I instinctively understand how men and women relate to each other.

Describe the moment when you felt least displaced.
Every Wednesday I get together with my closest friends here in Cusco for lunch. We cook, open a few bottles of wine, and laugh away all the week’s problems and dramas. It’s my Cusco family, and when we sit around the table, teasing each other mercilessly, I feel completely at home.

You may bring one curiosity you’ve collected from your adopted country into The Displaced Nation. What’s in your suitcase?
I tend not to hold on to things, just memories — and a hard drive full of photos. So I’ll describe a treasured photo from each country, instead.

From England: One of myself and my friends on the pebbly beach of Brighton. It’s a candid, and nobody’s posing, we’re just scattered about doing our thing. A couple of the boys are playing chess, a small group is talking, I’m reading a book, someone’s playing guitar. It’s a lovely slice of our lives that summer.

From Wales: Tintern Abbey caught just as the sun set. I was driving, turned a corner, and that sight took my breath away.

From Scotland: An entire album covering my 22nd birthday — from the moment my roommates woke me up with fairy bread and beer until about 4:00 a.m. the following morning. The deteriorating respectability is spectacularly documented.

From Peru: A Photoshopped-together photo of “Yamanyá,” the name of my hostel, spelled out in fire. We were camping by the Templo de la Luna (Moon Temple) outside of Cusco, and after half a bottle of rum I pulled out the camera and an Argentinian friend lit a stick on fire. It kept us entertained for more than an hour.

You’re invited to prepare one meal based on your travels for other Displaced Nation members. What’s on the menu?
Definitely a starter of ceviche: thin fish strips flash-marinated in lime with a touch of coriander, a load of chile, and a pile of fresh red onion, accompanied by a very cold Cusqueña beer. Served on the sand within spraying distance of the waves.

Then, in anticipation of my upcoming move to Buenos Aires, it’s a thick Argentinian steak cooked rare, with a glass of Malbec. Good meat is hard to come by in Cusco, and I miss it.

For dessert we’ll visit Dad in Italy: tiramisu, and then a strong espresso to finish the caffeine kick.

Then the Pisco gets opened, and it’s chilcanos all round: Pisco, ginger ale, a drop of Angostura bitters and a squeeze of lime.

You may add one word or expression from the country you’re living in to The Displaced Nation argot. What will you loan us?
From the UK: Minging has always stuck with me; I have no idea why. For the uninitiated it means disgusting, ugly, gross.
From Peru: Sí, no? — a delightfully Limeñan turn of phrase whose English translation (yes, no?) doesn’t make any sense at all.

It’s Zen and the Art of the Road Trip month at The Displaced Nation. Robert M. Pirsig, author of Zen and the Art of Motorcycle Maintenance, famously said: “Sometimes it’s a little better to travel than to arrive.” Do you agree?
I’ve always loved long, uncomfortable journeys, whether in car, train, bus, boat, or on foot — the process of being in transit, of movement, of change. I even have a sick fascination with long stopovers in airports: sleeping curled up on an uncomfortable bench, announcements blaring over the loudspeakers.

So for me, yes, the journey is a little better. Having been here, in Cusco, for almost two years, I’m growing uncomfortably restless. My mother argues that this is fear of commitment on an epic scale, but I like my life most — feel like I’m learning the most — when I’m on the move, and in the first blush of a new life in a new place.

I will point out in my own defense that I maintain my work and studies even while on the road. In a very stop-start sort of fashion, I’m finishing a Bachelor of Arts in International Studies and a Bachelor of Commerce in Economics from Deakin University in Melbourne, as part of their off-campus program. So I’m not completely irresponsible. (So there, Mum.)

Pirsig’s book details two types of personalities: 1) those who are interested mostly in gestalts so focus on being in the moment, not rational analysis; and 2) those who seek to know the details, understand the inner workings, and master the mechanics. Which type are you?
Despite a thoroughly scientific upbringing and education — Dad’s an engineer — and a very rational approach to my studies, when it comes to travel and expat life I’m all about the gestalts. I stayed in Cusco on little more than a whim, and recently returned from an ill-planned but exhilaratingly unpredictable road trip to Ecuador in a Volkswagen Kombi. Every moment of that road trip was a surprise — the cast of characters, a rotating mix of backpackers and South American musicians and circus performers. We followed the sun north, took a minor detour inland to teach a music and clowning workshop to the children in a poor community, and played music on the beach.

But although I laughed and made wonderful new friends and was constantly surrounded by music, this road trip, with its constant visits to mechanics, was also the reminder I needed of the importance of the rational type of personality. Road trips in general are a wonderful encapsulation of this duality, I think. Driving with the windows down on the highway with the music blaring, going where the wind takes you…but going there in a machine that needs care and understanding and maintenance. I’ve leaned too heavily to the romantic side, and it’s time to start taking better care of my machine.

Readers — yay or nay for letting Camden Luxford into The Displaced Nation? Tell us your reasons. (Note: It’s fine to vote “nay” as long as you couch your reasoning in terms we all — including Camden — find amusing.)

img: Camden Luxford on her recent road trip — in a tiny community about two hours form Pedernales in Ecuador, where she helped put on a juggling (among other things) workshop. She is posing with some of the kids and a teacher, along with members of the Colombian cumbia band she had as passengers for a couple of weeks. Yes, that’s the famous Kombi in the background!

STAY TUNED for tomorrow’s installment from our displaced fictional heroine, Libby, whose road-trip adventure of last week ended on a dramatic note. What, not keeping up with Libby? Read the first three episodes of her expat adventures.