Leave a comment Posted by The Displaced Nation Team on August 26, 2011

While our writers take off on what they hope will be enchanting August breaks, The Displaced Nation will occasionally be reissuing some posts that, for one reason or another, enchanted our readers. Enjoy these “return trips”! 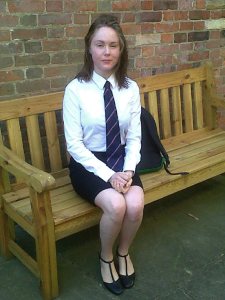 As youngsters head back to school, we’re reissuing a Random Nomad interview ML Awanohara did with Charlotte Day, a displaced teenager in England. Charlotte spent a chunk of her summer taking a Russian-language course in St. Petersburg and living with a Russian family. She has produced a travel yarn on her adventures, which will appear on Monday.

What made you leave your homeland in the first place?
My father is Australian and my mother English. They split up when I was two. When I was six, my mother met and married an Australian who had been living in New York for thirty years. I was rather disgruntled about moving to the United States and for two or three years, remained determined never to accept it as “home.” At that time, I was deeply patriotic to my native country — though this sentiment has dissipated since.

Is anyone else in your immediate family a “displaced” person?
My mother’s family, originally from England, has long been displaced. My mother herself was born in Kenya, in 1961. Following the Mau Mau Uprising, her parents were forced to relocate, and my grandfather, presented with a choice between Australia and Canada, chose the warmer of the two countries. My mother spent her childhood bouncing between schools in England and Australia. She eventually grew so fed up with packing and unpacking, she decided to leave school at the age of 16. Her father agreed to the plan provided she spend a final year at the school in Switzerland his own mother had attended as a girl. My mother moved on from Swiss finishing school to work in London, Paris and Sydney. But she appears to have made New York her last port of call. Indeed, we had a fairly solid life in the city until I decided to take myself off to boarding school in England.

Describe the moment when you felt most displaced over the course of your many displacements.
It must have been when I first arrived in New York as a six-year-old. I stepped out of the JFK arrivals terminal into a snowy March night. My stepfather was wearing a leather coat, the interior of his car smelled of leather — and the world outside the car window seemed an undulating stream of black and silver. Though it was the end of 2001’s warm winter, my Australian blood froze beneath my first-ever coat. And their apartment — that was all leather as well. It smelled of musk and cologne. Since that time, I have felt similar pangs of displacement, some of which lasted for considerable periods. But those first few moments in New York stand out as the most acute concentration of “displacedness” I have ever known.

Describe the moment when you felt least displaced.
For the last five or so years in New York, I have felt more at home than I ever did in Sydney. I ascribe this to growing up: at a certain age, one can take possession of a city, know its streets, bridges, tunnels and transportation system. I was too young when I lived in Sydney to reach that kind of comfort level. But when have I felt the most like a New Yorker? Perhaps it was the last time I came home for the holidays, and took the 4 train uptown for the first time in months. At that moment I realized how much this train had been a part of my life — conveying me home from school every day for two years. My old life would always be waiting for me on the subway, ready for me to pick it up again. That’s something only a New Yorker could say!

You may bring one curiosity you’ve collected from each of the countries where you’ve lived into the Displaced Nation. What’s in your suitcase?
From Australia: A miniature wooden wombat figurine — a gift from my grandfather. It conjures memories of a childhood spent beating about the bush (literally) and fishing for yabbies at the dam in the company of audacious dogs who stuck their heads down wombat holes, to no good end.
From New York: A pair of fake Harry Potter glasses. These defined my first six months in New York — I even wore them to my first day of school. I think it is telling that even at the age of six, I was unwilling to give all of my real self to this new home.
From England: My school tie — representative of the alternative universe I seem to have entered. At boarding school, the sense of removal from reality can be disconcerting — especially after having spent a decade in the city I regard as the world’s capital.

You’re invited to prepare one meal based on your travels for other Displaced Nation members. What’s on your menu?
I’d like to make you a Sydney breakfast: scrambled eggs, made with cream, salt and pepper and served on a bed of Turkish toast, with avocado and stewed tomato on the side (is this being greedy?). Our meal will be accompanied by a large “flat white”: what we call perfectly strong, milky coffee without excessive froth. I suggest we consume it overlooking a beach on a Sunday morning. At least, I assume The Displaced Nation has beaches?

You may add one word or expression from each of the countries you’ve lived in to The Displaced Nation argot. What words do you loan us?
From Australia: Daggy. I use this word all the time — and did not realize it was exclusively Australian until I was informed of the etymology. Apparently, it comes from trimming the soiled wool around a sheep’s bottom. Which part of this repugnant whole is actually the “dag,” I do not remember. (No, I’m not a proper Australian!) But as I understand it, “daggy” means sloppy in appearance or badly put together.
From New York: There are so many words, and most are second nature by now. However, I will choose grande-soy-chai-tea-latte because I still shudder to think of myself as the kind of person who can utter such a phrase, at great speed, with great insistence. In fact, I’m still in denial about my love for Starbucks: having known Sydney coffee, my standards should be higher.
From England: Banter. I still do not know the precise meaning of this word, but it seems to encapsulate everything that makes someone my age feel socially acceptable — and, of course, I have no banter whatsoever. I think it means the capacity for combining wit with meaningless conversation. But there are other components, too, which seem to me unfathomable.

Question: Readers, tell us what you think: should we welcome Charlotte Day to The Displaced Nation and if so, why? (Note: It’s fine to vote “no” as long as you couch your reasoning in terms you think we all — Charlotte included — will find amusing.)

img: Charlotte Day at her boarding school in southeast England